those leash kids on the way there 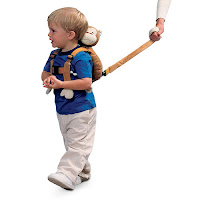 With apologies to the Handsome Family, I see them all the time in airports, those gaggles of kids being led around on leashes, like bipedal puppies about to board a plane to the coast. It took me a while to figure out that their leashes were cleverly disguised as whimsical animal backpacks. Not only are these kids being leashed, they are being duped at the same time.

But as the Offspring Formerly Known As Resident pointed out, just wait till those kids figure out that all they have to do ... is take off the backpack.

I've never leashed a kid, although I came very close to doing so after the OFKAR and I became separated in a mall when she was about two years old. We were in a craft store which had a little table set up where kids could colour and mess with crafty stuff. While she coloured, I turned the corner to look for something in the next aisle. I swear my back was turned for no more than 15 seconds, but when I turned back, the table was empty.
Have you ever had a child go missing on you? It is the single most devastating blow that I can imagine. Even now, seventeen years later, I can still feel utter panic punch me in the gut when I recall the moment that I realised my child was no longer in the store.
It was a rather large mall, set up in a star pattern, so it was impossible to know which direction she had gone, or if she had gone alone. Happily I found her a couple of minutes later, being comforted by the information booth lady, where I raced to after I realised that I would need help.
We sat on a bench and hugged and cried for several minutes. The guilt lasted much longer.
Posted by Barbara Bruederlin at 7:31 pm

My baby brother had a leash for a brief period. I felt awful about it, but he didn't seem to mind and he never got lost. Granted, it was a bit longer than the ones you see today (and not attached to a backpack, which is just silly).

I was a leash kid :( But it wasn't one of these cute newfangled ones. It was leather and looked like some weird S&M harness. I'm scarred for life.

I'm always expecting to see a leash kid tied up outside a convenience store, SME, but so far this hasn't happened. Presumably your brother never was, either.

This would explain a great deal, Karen. Do you still have it?

Alas, despite my promises of cotton candy and hot chocolate in the next aisle over, my kids refuse to leave my side.

I have a British friend who, as a kid, got separated from his parents on the Tube of all places. He stepped on and her bag got caught in something, then he was off.

I was never a leash kid, but I got lost once in a supermarket. My parents found me in the coffee aisle pouring all the beans unto the floor.

Still they didn't put a leash on me after that. Never was lost again though.

Mom says I was always very bad to drift off, chasing rainbows in shopping venues. She said once she noticed as I floated away and she hung back where I couldn't see, but followed me. She said she watched for a long time and that I was completely unconcerned and never seemed upset that mumsy wasn't within view. Oooh. Shopping! She said she gave up expecting me to figure out I was lost and finally scooped me up and went about her shopping. I can imagine how grief-stricking a parent would be at the instant they know their child is missing, and I think the leash is a damned good idea. The backpack is a clever ruse.

BTW, I remember my aunt putting an acutal leash on my cousin at Disneyland in the 70s because the wanderlust was strong in her, and my Aunt drew critical tsks and longer admonitions from the other merrymakers at the park. I say good on her for doing what it took to manage the little daytripper. :)

Scary indeed. It happened a few times with Wally; he was only missing for a few minutes but you always think the worst.

Most notable occasion was when he was about 3. I lay down for a nap; he was watching TV. I woke up and didn't see him anywhere. Ran around to a couple of neighbors; they hadn't seen him either. Just before I would have picked up the phone to call 911, I checked his room. There he was, in his own bed, taking a nap just like Mommy.

Whew. ...Leashes wouldn't address that one!

Did your British friend ever find his parents again, John? Or is he hanging out with your offspring waiting for a bribe worth leaving your side for?

Obviously after that you gravitated toward the tea aisle instead, Al. No need for a leash there!

She is indeed a keeper, Phlegmmy! And how clever of your mom to lurk in the background to see what her wandering uber-shopper would do once free.

Awww bless little Wally, Volly! He was just going with the flow. A great story, but I can well imagine how panicked you were.

He did. A stranger brought him back. A good moral was learned that day.

Many a moral, I would suggest, John.

I completely understand that fright when missing a toddler - our oldest (and boldest!)would hide in the circular clothing racks giving me numerous heart attacks. I would not have leashed her though I did contemplate it but it just did not feel right to do that.