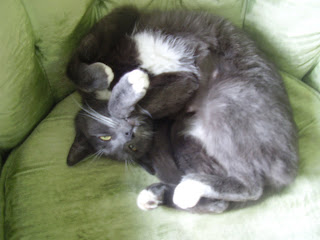 I do it all the time, and I am sure that it's happened to you once or twice too, but isn't it rather unusual for a cat to trip and fall whilst running up the stairs?

Ramona, sweetheart though she may be, is doing nothing to negate my suspicions that she may be slightly retarded.

Posted by Barbara Bruederlin at 6:42 am

Email ThisBlogThis!Share to TwitterShare to FacebookShare to Pinterest
Labels: don't tell PETA I said that, my my my my Ramona

I think it is more common that you would think - I've seen my cat(s) run full throttle into furniture and roll off the bed upside down and backwards - hmm-m must be related in the intelligence dept.

'Retardness' can often times be mistaken for that awkward teenage phase... The clumsiness just one part of that. Let me ask you... Is she on the phone at all hours? Is she eating you out of house and home? Sleeping at all hours? Texting her friends incessantly? A little smelly at times?

If I had a dime for every time I uttered the phrase: "He's not retarded, he's a teenager." Well... I'd have a handful of dimes.

Hang in there my dear it's just a phase.

Sam has done that once or twice, but she has bad hips, and my parents have the steepest stairs.

I've seen my hubby do that before, what do you suppose that means?

Some cats are way more coordinated than others. We used to have a cat that could leap up and land on top of an open door from a standing start, but we've had a couple who couldn't jump up on a sofa without doing a header.

I guess I have always assumed that cats were the epitome of dignity and athleticism, Kathy. Obviously that was an urban myth.

Sometimes, definitely, most certainly, I suspect so, absolutely.
You have no idea how much of a relief it is to realize that Ramona is just being a normal teenager, Sean. Can I send her to live at your place for the next 3 years? I think you are much better at handling hormonally challenged teenagers than I am.

That's why we make her wear a bicycle helmet at all time, Kelly.

I love how you defend Sam's dignity, Al, because, quite unlike Ramona, she really is a very dignified soul.

That he is related to me somehow, Moe? Because I have done that more times than I care to disclose.

I'm actually glad to hear that, Mr Anchovy, because our last cat was extremely surefooted and I guess I am being unfair in comparing the current cat to her. She had some pretty big shoes to fill.

D'awww. I like clumsy cats. They're so much more accessible. Ramona and I would make great friends, I'm sure of it.

I think you would, too, BAP. What Ramona lacks in life skills, she makes up for in sweetness and in unusual poses.

I think some cats are just klutzy. I've seen them trip and fall from things, then shoot a look in every direction to say, "You didn't see that. That did not happen."

It's so true, SME! That's exactly what they do, especially the ones that normally view themselves are dignified.