requiem for a record store 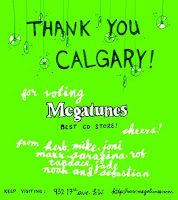 I bought one of my all-time favourite CDs at Megatunes. Neko Case's Furnace Room Lullaby almost always makes my Essential Recordings list, whenever somebody asks me for it. And I bought it on the day that I made my first foray into the iconic record store on 17th Avenue.
Since then, Megatunes has become my go-to record store, the place where I could usually find that rare recording, that obscure musician, that emerging local talent.
It was the place that I sent people to. If someone was passing through Calgary and wanted to know where the good record stores were, I always directed them to Megatunes. When I am volunteering at the record tent at the Calgary folk festival, and we don't carry something that a customer is trying to find, I always suggest they try Megatunes. Even after Megatunes stopped sponsoring the record tent. They were always the store where you could find that recording.
I still have a small Megatunes box in my closet, which was filled with CDs as part of a prize I once won. The prize that launched my passion for the folk festival.
And now, after 22 years of being the face of Calgary's independent record stores, Megatunes is closing its doors. It's a huge blow to the city and an enormous loss for music lovers.

Over the next few weeks, before Megatune's doors finally slam shut at the end of the summer, I will no doubt make a few final forays to that musical haven to pay my respects, say my goodbyes. And like Homer mourning the death of Pinchy the lobster, I will gobble up that clearance sale, while wearing my lobster bib and sobbing between bites.
Posted by Barbara Bruederlin at 12:21 pm

Was this the record store you took us to when we visited? By the red phone booth we put Yoda in?

So sad when you see independent record stores go. :(

It's true what Dr. Monkey says but the death of a record store is more than that because it is symptomatic of the demise of that whole business model,that way of distributing music.

Great Simpsons analogy. Megatunes, the way you describe it, sounds like what Fred's Record Store used to be in St. John's. I say "used to be" simply because I've been gone so long, I have no idea if they've kept up the same quality or relevance as they did. But, judging by their website it looks as if they're surviving. I hope Megatunes' demise doesn't foreshadow things to come.

Damn, I shoulda used that as my title, Al.
The yoda trip! No, that was Hot Wax, which is a used record store, and fortunately still functioning. Now I wish we had taken you to Megatunes though.

It really is, Dr M, and this business was a cornerstore of the music community in Calgary, so a double blow.

The record store has certainly been facing challenges, Mr Al, as has the whole music distribution industry, as you point out. But there will always be those of us who need to hold that physical embodiment of music in our trembling hands, to scour the liner notes, to analyze the artwork. The record store is not dead.

It's so heartening to hear of places like Fred's Record Store, John, that stay healthy and relevant and an important part of the local community. Long live Fred's in St. John's!

The end or death of a record store is a really sad thing to me. Not so much the physical loss of a building but more the loss of that community places like a great record store always seems to foster. I liken these business locations to neighbourhood pubs where music can be heard, varied opinions shared, too much money spent on one's vices...

I feel your pain on this one my friend. This is just happening too much of late. Our beloved physical music now relegated to zeroes and ones and a barely virtual commodity.

I read today that Ted Leo is considering retiring from music next year because of low record sales... Sad, sad, sad.

Go out there and buy a record or CD today friends. You just never know when that luxury might one day just disappear.

damn I was just going to visit it.

I took your advice to heart, Sean, went down to Megatunes, expressed my sorrow and bought a mittful of cds. There are a couple that I think you might find of interest.
One of the advantages that a good record store has over a neighbourhood pub, is that you can drive yourself home after overindulging in your vice. And the hangover is fabulous.

It's not closing till the end of summer, Kelly, you've got time to scoop up some deals.

That sucks. That sort of store is getting harder and harder to find.

Furnace Room Lullaby was a great first find, though. I play it often.