... but he probably never cut up magazines to make pictures. Not like me. 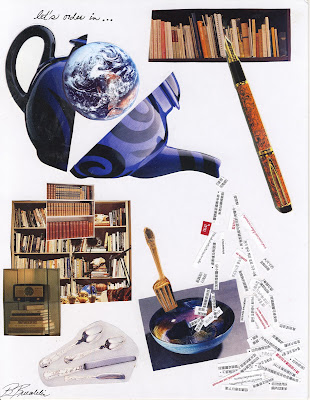 Posted by Barbara Bruederlin at 1:21 pm

Email ThisBlogThis!Share to TwitterShare to FacebookShare to Pinterest
Labels: my so-called art, with apologies to the Modern Lovers

I suspect he actually was called an asshole.

No, Pablo never got called an asshole but he was commonly refered to as a twat, prick, & wanker, just to name a few.

I am far from being an expert on art but I know what I like. I find the piece to be very nuanced, and good art evokes an emotion. I find it very warm and comforting that the knowledge of all mankind comes pouring out of a split tea pot and falls into a bowel for the consumption of all the people of the world.

Thanks, Jas, it's nowhere near the real art that you create, but it was a lot of fun.

Glad to hear it, Volly.

The movie, Al? I haven't seen it, was Pablo Picasso in the soundtrack? That alone would be worth the price of admission.

He probably was, once or twice, Mr Anchovy.

But wanker is an affectionate term, isn't it, Doc?
What a lovely thing to say about my cutting and pasting! I never really stopped to analyse what the picture meant, but obviously I need to hire you to look after such matters.

You showed me that collage can be pretty great stuff, Dr M, with your awesome collection.

Jonathan Richman is a god, Moxie! Pablo Picasso makes me chuckle pretty much every time too, as do a lot of the Modern Lovers' songs. I've had Government Center stuck in my head for a week or more, and I don't even want to gouge my eyes out.

Then let me be the first...

Unintended I suppose but the handled half of the pot and globe look like a cat to me. Picasso would have liked that.

Oh no, I was doing a play on words. You were using paper in your art, which I heart. ;)

Hey, you're right, Leazwell! It does look like a cat ... I mean, yes, that was my intention all along.

Oh silly me, Al! I missed your clever wordplay entirely. (but I wonder if Pablo Picasso has ever been used in a soundtrack?)

You probably see similar attempts amongst your elementary school students, John, but thanks!

Oh, collages are great! Very therapeutic, actually. Trust me - it's one of the most popular crafts on psychiatric wards (no, I'm not insinuating anything about you with that statement!). And you should see my two chocolate bar wrapper collages in my kitchen!

"Spilling her guts as she writes her articles,
Sometimes forced to eat her words,
Using the best silverware,
The world offers"

I don't doubt the therapeutic value of collage-making, WC. It's a creative outlet for people who have no artistic talent. Plus you get to use scissors.
ANd I would love to see your chocolate bar wrapper collages if you would care to post them.

Almost a haiku! Just what this thing needed, UB. Thanks!