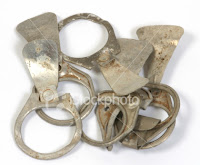 My dad was an old school type of father. He wasn't the type to spend time much chilling with the kids, and, although he was a pretty strict disciplinarian, he didn't concern himself all that much with our social lives, as long as we stayed out of trouble and made it home on time.
I'm not faulting him for this. He was both a product of his time and a very private person. But since I was the youngest kid in the family, I suspect that I barely existed for him.
This suspicion was confirmed one night when I was in junior high school. I was at a dance at the school that I had been attending for the past seven years. This was in the olden days, when dances were called sock hops (on account of you had to take your shoes off before entering the gym in which they were held) and when pop was sold in cans that had fully removable pop tops sporting razor sharp edges. Naturally, I stepped on one of these discarded pop can shrapnels, cutting the bottom of my foot to rat-shit.
The vice-principal, who was chaperoning the dance, followed the trail of bloody footprints to the bathroom where I was attempting to staunch the flow of blood and escorted me to the office, where I phoned home to ask if my dad could come pick me up. He sat there with me in the office while we waited for my dad to arrive.
And waited. And waited. And waited.
Finally, the vice-principal must have tired of having me bleed all over his office, or perhaps he genuinely felt sorry for me, and he drove me home himself.
I hobbled into the house, where my mom was waiting with the cure-all bottle of Detol and the box of band-aids, mere minutes before my dad's Volkswagon pulled into the driveway and my dad stormed into the house. He took one look at me sitting there, and with a scowl on his face, demanded to know where the hell I had been, because he had been sitting outside the school waiting for me for half an hour.
The only problem was he had gone to the high school instead. No wonder he was pissed off! I always felt like I won that round, since it was evident that my dad didn't even know what school I attended. To this day that story remains one of my favourite cautionary tales and, ironically, one of my favourite memories of my dad.
I hope that all you procreating males had yourselves a fabulous Fathers' Day, and that all the surprises you received from your offspring were welcome ones.
Posted by Barbara Bruederlin at 6:46 pm

Email ThisBlogThis!Share to TwitterShare to FacebookShare to Pinterest
Labels: I hope you're enjoying your new Father's Day tie

That was sad but funny. It was truly a Willi thing to do - he was a great guy but definitely a product of his time. You know though, I would never doubt his feelings for you - anytime your name came up in conversation he would just glow, in his own Willi kind of way. Bet you didn't know you could do no wrong - kind of like your brother. Guess that comes with having been the baby of the family.lol

We had a lot more in common once I started university, Kathy. He had a real interest in agriculture and we had a lot more to talk about then.
Thinking about the school dance incident will always make me laugh though!

Nice story, but Anonymous' comment really made me misty. It really took me back to my childhood. Oh, if I had a dime for every time my dad used to say to me, "偷來的愛情
或許新鮮刺激，或許瘋狂美好." Meeeee-moooo-riieeeeees....

Anony has been telling that same story over and over, all over the blogosphere, Beckeye. I finally had to kick him out. I'm sure your dad was much more eloquent, or at least changed up the punchline every now and then.

That's a great story, Barb. Made me smile. My mom has a few stories like that (she was one of 11), and the middle child. I however, no longer feel sorry for all the times she was left somewhere, waiting for pick-up, because mine out number hers. ;)

Strange, I was certain I had responded here already, Al. Your poor mom must have felt quite invisible while growing up. Good to know that you have her beat on the tales of woe, though!

My father frequently worked third shift, and didn't sleep well-- particularly not with three very active boys, and especially not in the two-bedroom apartment we lived in in Chicago when I was a kid.

One day, my brothers and I were leaving, as quietly as we could, to walk the couple of blocks to our grade school. My father flew out of my parents' bedroom in a fury, demanding to know where we were going.

He stood there for a second, looking a little sheepish and snapped, "Well be quiet going out."

Not surprisingly, I am very loath to yell at my own kids.

It must have been like living with a ticking time bomb at times, Johnny. Fortunately the foibles of our fathers make for great stories, especially if we don't find ourselves repeating them.