the sound that you found for me 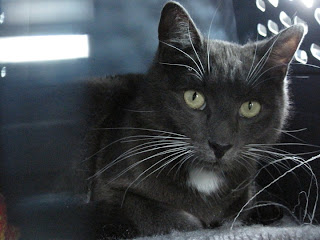 This is Ramona, on her way home from the Humane Society on Thursday. She is a 1.5 year old, whose sweet and gentle nature belies her underprivileged beginnings as a pregnant teenage stray. As you can tell, she has the most exuberant flourish of white whiskers on her long pointed, jaguar-like face. She also has really long arms and legs and, as the Resident Offspring so astutely observed, white ankle socks on her hind feet and white fingerless gloves on her front paws.
She had likely never been inside a house before and was very shy when we brought her home, wasting little time in wedging herself between the wall studs under the basement steps. After a couple of hours, during which time she did not appear to have moved (we could really only see her hind end) our growing concern necessitated a bizarre scenario in which the RO had to wriggle between the upright beams into the box graveyard under the stairs in an effort to extricate her. After some stressful moments, a heroic effort, and a whole lot of dust, the RO was ultimately successful.
Ramona settled into the rest of the basement quite nicely, finding little hidey places, but coming out to purr and bump against our legs and be all lovey when we came down to visit, which we did often. We anticipated that we would have a basement-dwelling cat for a week or two.
But then last night, a switch was suddenly flicked. Up came Ramona from the basement, hopped onto the chesterfield with us and began talking. After that, she quickly explored the other levels of the house, poking into all the bedrooms, gazing in amazement out the living room windows, walking the fireplace mantle. She is getting used to our stomping and loud-talking ways.
She is still a little skittish and cautious, bolts at the sound of the toilet flushing and hates the screechy back door when it slams shut, and she is still a little uncertain as to why I have moved her food and water into the kitchen. But she is a total lover, full of gentle kneading and hugs and cuddles.
Although in real life Sputnik would have ripped Romana to shreds, I think her spirit approves.
Posted by Barbara Bruederlin at 9:55 am

Email ThisBlogThis!Share to TwitterShare to FacebookShare to Pinterest
Labels: a house needs a cat, Ramona

Holy crap, Ramona sounds and looks just like Ippie: skittish but super sweet when she feels comfortable. Is it a gray girl kitty phenomenon?

So glad you found a lovely new cat to bring home. Looking forward to hearing more stories about young Ramona!

This is the best story I have read all week.

She's probably wondering just how the hell she ended up in a house full of zombies. Welcome Ramona, you're gorgeous and you'll soon feel the love of a wonderful family.

I can't tell you how glad I am that you have made opened your house up for a new cat. That Ramona is one lucky cat. Already exploring the upstairs. I think Ramona will be calling the shots in no time. Have fun with the newest member of the zombie clan.

What a lovely cat! Every cat takes a different amount of time to adjust. Sounds like yours is doing just fine!

Romana is a little beauty, and how lucky and wonderful that you found each other!
Our offer for babysitting continues, of course.
Welcome to the extended family, Ramona!
Berni

I just realized I had somehow missed the post about Sputnik's death-- and while it's too late now, I'm sorry for your loss.

On the other hand, Ramona looks and sounds wonderful and sexy. Er.. not sexy. My daughter would approve of her name, for sure. Her last name isn't Quimby by any chance? And, yes, I'm sure the spirit of Sputnik would approve.

Aww. You know I'm not much of a cat person, but Ramona is a cutie.

She is every bit as beautiful as your spouse said. It was the 2nd thing out of his mouth after Hi. He sounded so pleased with her. I can see why.
Oh - and your cabin is phenomenal!!! I think I have a case of cabin envy - only in a good way though. :)

Separated at birth, perhaps, Moxie? Hopefully that means that Ramona will turn out to be a tech cat, we could use one of those.

It was a happy story to tell, Missy.

She's now sleeping on the armchair, Toccata, getting more and more comfortable on the other levels every day.

She is doing really well, Mr Anchovy, getting more comfortable every day. Soon she'll be demanding the car keys.

Grey is my favourite colour, Al, I can drape her around my neck when I am feeling stylish.

I'm sure she would love to visit with her auntie, Berni. She has no doubt heard about how Habby gets spoiled rotten at his grandparents' house.

Thanks, John, it was hard losing Sputnik, but Ramona is a fine fine replacement. And she is kinda sexy to tell you the truth.

She's fit and she doesn't even know it, Beckeye.

The Spousal Unit was pretty pleased to get up this morning to find the shy skittish cat he had seen when he went to bed had been replaced by a confident and inquisitive one, Kathy. So glad the cabin looks alright! I can't wait to get out there and see it myself.

Oh,I am so glad to hear this! She's lovely, Barb! She will take some time to adjust, but she seems to be doing very well for an unsocialized cat so far. I had one that lived on a bookshelf for a month in a spare room before she was OK just peaking into the hallway. And another that stayed under the bed almost the whole time I had her. And with Juno, when we moved here, it took her a good 2 - 3 weeks before she started acting "normally" again. Cats are not super fond of change! I'm glad she's a cuddly purring machine, though, and I totally think Sputty would have approved, too.

What a beautiful girl! Enjoy these days when she is willing to show her gratitude, before she becomes more comfortable and cat-like and acts entitled to it all. haha :) Congrats on your new addition.

We were ready to welcome a new furry kid into the family, Dr M.

A month in the bookshelf? Wow, that is one skittish cat. You are the ultimate cat mother, WC, having that sort of patience. I'm so glad that Juno has settled into her new home now, and I will remember that when Ramona needs some extra time to adjust.

Oh yes, the cat-like entitlement is sure to be displayed eventually, Lesley. She sure is loving and grateful for now though.

She's lovely! And as a couple of other folks said, that hiding behavior is pretty typical. Our little girl stayed behind the dishwasher for most of the day for a couple of weeks until we blocked off her access. Nowadays she follows us from room to room, whether we want her to or not.