it's the buzz, cocks! 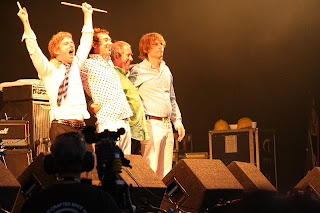 the Buzzcocks
Republik Nightclub
May 29/10
This photo is not from Saturday night's concert at the Republik, but Steve Diggle was wearing the exact same shirt. It struck me at the time that it looked rather like a pyjama shirt and with the 7:30 start to a Saturday night show, I thought that maybe it was a sign that the Buzzcocks were going to bow to the realities of the decades that had passed since they cemented their role as influential punk innovators and go for a laid-back Muzak approach. NOT SO!
The show actually started earlier than the stated 7:30 time, which I have certainly never seen happen before, with Dollyrots pleading to a still small audience to get off their seats and come down to the pit. Dollyrots played a long set and they were energetic enough, but ultimately not all that interesting. Fairly standard punk pop. The frontwoman was obviously trying to tap into some aspect of punk sensibility by repeatedly calling the audience pussies, but it all felt like so much posturing. The continual namedropping of Blackheart Records, followed by a cover of Bad Reputation, sort of confirmed that suspicion.
The Buzzcocks, however, were the real thing. Granted Pete Shelley and Steve Diggle were the only two original members, and, as the RO noted, the rhythm section looked like they were 14 years old, but they played like they have been playing together their entire lives. And for a couple of old guys, one in a pyjama shirt, the other in a giant patchwork clown-inspired button down, their energy certainly belied the years. At times I really felt like I was in 1970's Manchester, especially during the rather limited banter, where I could barely understand a word that was said.
As could be expected, it was a very mixed crowd at the Republik. We had a perch up on the third level, from where we could look down upon many bald heads thrashing in front of the stage. Not shaved bald heads either, I am talking about a healthy representative of legitimate male pattern baldness. And there were more than a couple of matronly hips noted gyrating alongside the young hipsters in attendance.
It made for a really nice mix of people. As we occupied one of the few tables in the area, plenty of people used our table as a place to lean against and to park their drinks, including the smelly drunk guy and his nice friend who kept offering to buy us drinks, and the muscular beMohawked guy who just had to show me the photos that he had captured of the concert.
And what a fine concert it was. It was loud, it was joyful, it was high octane. My ears were still ringing the next day, and that hasn't happened to me after a concert for quite some time now. It was great to see Another Music in a Different Kitchen and Loves Bites performed in their entirety. As can be expected, people went nuts when the Buzzcocks played Orgasm Addict and I Don't Mind and especially when they launched into Ever Fallen in Love, but my personal favourite of the evening was What Do I Get. There wasn't a single person who didn't sing along.
The concert was over by 10:00, and Pete Shelley and Steve Diggle may very well have headed back to the hotel room to watch a little telly and drink some cocoa, but by god they earned it. There was a lot of love flowing back and forth from the stage to the crowd at the Republik on Saturday night, with Diggle and Shelley obviously enjoying reaching out and touching the outstretched hands. Not only did the Buzzcocks put on a hell of a highly energetic show, but they restored my faith in the relevance of musical icons. Well done, Buzzcocks!
Posted by Barbara Bruederlin at 7:40 am

"Not shaved bald heads either, I am talking about a healthy representative of legitimate male pattern baldness."

Ha ha ha! I'll have to keep notes on the crowd tonight. I hope the show is over that early, but the doors open at 8pm here so I doubt it. A girl with an early morning meeting can dream! ;)

I bet it'll be over by 11:00 though, Al! Maybe even sooner, seeing as it's a school night and all. My bet is that you will also see a really mixed crowd, which makes for great dynamics.
Have fun!

Back in the late 70s I thought punk was fun and interesting because I was sick to death of the combination of Fleetwood Mac/Eagles/disco that dominated the airwaves. I was more interested in some of the other British music I was hearing at the time, though, like Nick Lowe, Elvis Costello, Dave Edmunds and let's not forget Ian Dury and the Blockheads. I still listen to Nick Lowe quite a bit, as a songwriter who really successfully matured over the years. I don't know how I'd feel about going to a punk show these days. Maybe I'm getting old. Speaking of which, I have tickets to see Ramblin Jack Elliot in August. Wahoooooo.

Even just reading your comment about Fleetwood Mac/Eagles/disco made my eyes glaze over, Mr Anchovy. I remember the Clash, Elvis Costello and Blondie filling my life like a fresh ocean breeze.
But you would have felt quite comfortable among the rest of us at the Buzzcocks concert, who were of a certain vintage.

Hey Barb - thanks for the synopsis! It does my heart good to know some old punks are still touring around and bringing the noise. The multi-generational appeal is not surprising, as this is the type of primal music that appeals to anyone inclined to embrace the pure joy and spirit of rebellion and catharsis inherent to this type of music.

Verification word = "brissc", which we all know is a famous brand of head wax that helps old punk fans keep their bald heads nice and shiny.

If the Buzzcocks keep touring, I am definitely investing heavily in shares of Brissc, Matthew.
I agree that there is something timeless about the joyousness and simplicity of this music. I'll be there for the wheelchair tour.

I am so jealous!

The Buzzcocks' music has aged really well, hasn't it?

It really has, Johnny! It's survived the years and transcends the generations.