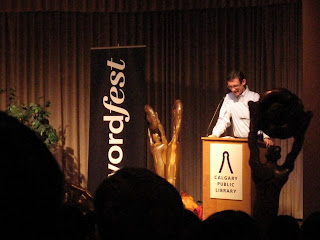 What do you do when you are busily preparing your domicile for the musical and social event of the century, which includes bunking down a troupe of travelling musicians for a couple of nights? Why, you go out pretty much every single evening in the weeks leading up to it, of course.

It's not quite as counter-intuitive as it sounds, as it is good practice for staying up late, just like a rock star.

Earlier this week, it was a reading at the Central Library by Chuck Palahniuk, which was awesome fun. I had heard tales of these Palahniuk readings and the throwing of body parts and such, so I assumed that this one would not be your average literary reading, with the author droning on and on in a Can-Lit-poet-meets-undertaker voice. But I had no idea that it would be as interactive as it was, nor that Chuck (I feel that since he hurled an inflatable plastic turkey at my head, we are now on a first-name basis) would be as engrossing a story teller as he is.

This was the only Canadian stop on his tour, which made us feel all superior to Toronto, Montreal and Vancouver. Chuck read us a story called Knock Knock, told in stand-up comic format, which dealt with the impending death of a parent. It will be published in December's Playboy, so this time you really will be reading it for the articles.

During the Q&A, Chuck explained his philosophy toward writing, borrowed from a long-ago writing professor - Dangerous Writing. This involves taking the aspect of your life that is absolutely unbearable, that is too painful to deal with, turning it on its head and writing about it. I think that explains so much about his body of work.

I wasn't particularly surprised that Chuck Palahniuk would have a lot of mesmerizing stories to tell. He does make up stories for a living, after all. But I was surprised at normal he seemed. And the fact that he stole the term "some kind of weird name-dropping Tourette's" from Sam Rockwell only made me admire both men more.

And if listening to a reading were not preparation enough for hosting a house concert, last night we went to an actual house concert.

The pet rabbit was kind of freaky, as pet rabbits are, but it was reassuring to see that you can indeed fit a whole pile of people into your living room for a concert and everybody gets along well and nobody stabs anybody over elbow room.

We were only able to stay for Shane Ghostkeeper's opener, but despite missing two of the performers, I felt that our little reconnaissance trip was well worth leaving the house for. I am now pretty confident that we can pull off next weekend's house concert of the century, with the fabulous Olenka and the Autumn Lovers, and fifty or so of our closest friends, with style and grace.

If you happen to find yourself in town, give me a call, come on over.
Posted by Barbara Bruederlin at 3:00 pm

Very interesting about Palahniuk. It is rather rare to see and hear a writer who appears normal. So many are so aren't.

I have met one myself, a couple of times: John Connolly from Dublin, who writes very dark and violent mystery/thrillers. In person, he is the exact opposite: funny as hell, and he loves to chat with each of his readers. He cares about our opinions, and is known to quaff a few with readers after a reading and signing.

I wouldn't say the same thing about Stephen King, who is creepy just to look at.

Stephen King looks like a character from one of his novels, that's for sure, Charlie! Which seems right somehow.
It's funny how we have a certain expectation of a person based up what they write. I guess in reality that is just one aspect (and often the deeply buried part) of their personality that comes out in the writing.

Most of the authors I've heard or met have been quite down to Earth.

I'm curious, how did you expect Chuck to look?

I'm doing the same thing there. Right before summer chaos starts at the museum I am planning to go away for 4 days, and every night this week have something planned (I really just don't want to pack). I keep telling myself it will aide in the organization to be this busy. Yes...let's go with that.

Sounds like a delightful night out! I would love to meet Stephen King myself. He's one of my favourites from when I was young. I think he'd be intriguing.

I had seen pictures, so I knew what he looked like, John. I just expected him to be wearing a butcher's apron or an eye patch or something.

Why do we do this to ourselves, Al? Maybe it really is practice in tetrusing our time.
I'll bet Stephen King would have some great real life stories to share.

This reinforces to me Barb that in my eyes you are indeed a rock star. Your engagement with the world of ideas, art, literature and music is breathtaking! A house cocert sounds divine!

I used to go to a lot of readings, but my tribe of very sweet and busy young offspring keeps me closer to home many nights, still though, all the more wonderful when I can get out and be dazzled by words.

verification word = "Bleti" which we all know is the distant cousin of the infamous Yeti, albeit slightly smaller, less reclusive and more savvy with digital media.

Aw shucks, , there is no way I could ever stay up late enough any more to ever be considered a rock star, but bless you for even thinking it.
Do you ever take your wee sweet things to readings of the child lit ilk? Just be cautious of the Robert Munsch ones, now that he has come out as a coke head.
And we are are Bleti, are we not?

I am SO jealous you got to go to this! I should have driven up! darn!

You should have, Stephanie. Worth the trip!

You nailed it, Barb! THANKS! That's exactly what I think most poetry readings sound like, and many fiction ones too!