because the night belongs to Autumn Lovers 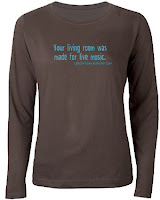 There was a saskatoon pie hanging from my door handle this morning.
I suspect most neighbours would be more likely to greet you with a scowl the morning after you threw a party that wrapped up about 3:00am, but not mine. Mine bring you pie and a thank you note.
It was an unqualified success, last night's house concert by Olenka and the Autumn Lovers. We had a very respectable turnout - about 35 people - which was pretty much the optimum number needed to fill the living room. With every square inch of the living room jammed with every chair that we could scrounge from around the house and garage and from a few of our neighbours, a kitchen party was pretty much the only option before the concert proper, what with the night being decidedly too chilly for my plans to have the guests meander throughout the house and into the back yard prior to the concert.
We hadn't really anticipated that guests would arrive bearing as much wine as they did. We were asking for donations to the band at the door, after all, so had stocked up on an inordinate quantity of beer and wine. But our friends and neighbours are nothing if not generous, and despite our best attempts to make a dent in the alcohol stockpile that accumulated in the kitchen, we could easily throw another party tonight and wouldn't even need to go to the liquor store. Suffice it to say I was not forced to drink that sketchy box of Zinfadel that the Spousal Unit had bought on a whim, a fact for which I am forever grateful, as Zinfadel is not supposed to be pink and smell of cherry Kool-Aid. Our neighbour, the Big Rock rep (aka the beer elf), really took the party to the next level, though, when he set up a couple of kegs in the backyard. Despite the chill of the night, those kegs were very well attended.
We greeted a steady influx of guests until just before concert time, when Olenka, Sara, and Paterson took their places on the lovely technicolour deer rug, purchased at the Regina Value VIllage, which they were using for a stage. I had been warned by some "how to host a house concert" websites that I may need to work to get the attention of chatty inattentive drunks, but our guests were remarkably respectful of the fact that they were there for a concert, not just a piss-up, and quickly took their seats after my announcement that we were about to proceed.
Oh and what a lovely concert, Olenka and the Autumn Lovers treated us to. With classical guitar, violin and cello, and with Paterson's and Sara's beautiful soaring harmonies accompanying Olenka's strong and passionate voice, the Autumn Lovers brought us on a soulful journey through revolutionary Poland and Vancouver's east side. For over an hour, they serenaded us with a powerful acoustic rendering of their award-winning music.
I think the aspect I found most satisfying was glancing around the room during the show, looking at the rapt expressions on the faces of my friends. They were so obviously enjoying the intimacy of the evening. The inclusiveness of the experience brought such a relaxed vibe to the show, a feeling that you could never find in a larger concert venue. The between-song banter was not a one-way street. People commented and asked questions, jokes were tossed back and forth, and the barrier between performer and audience was blurred and obliterated. I absolutely love it when that happens.
It's even more fun when you can relax and have a few drinks with the band and a few dozen friends and neighbours after the show.
I was so pleased with my first foray into hosting a house concert. It was most gratifying to me that people were so receptive to the idea, so curious and open-minded and so willing to support independent Canadian musicians. And it was so wonderful to be able to share some space and some meals with such a talented group of musicians. My family have found some very talented new friends, who give impressively bone-crushing hugs. I cannot wait to try this again.
Posted by Barbara Bruederlin at 3:45 pm

Thank you again for such a lovely, lovely evening!

Your description was very apt; we enjoyed the intimacy of the concert itself as well as chatting with the band members after their set. You and your house simply sparkled and as always was so warm and inviting. I did drink some of Jerry's box o' wine and have survived with no ill effects (so far!)

Truly one of the best concerts we've been too! Can't wait for the next one!!!

PS Hope the girls had a safe trip to Edmonton, don't you feel somewhat responsible for them now?? Why do I feel like that? LOL

You are so damn cool. Won't you be MY neighbor??

You are too cool for words.

I am so pleased for you! Fantastic!

I do feel somewhat responsible for them, UB! It's that innate momism, some tiny animo acid that gets incorporated into our cells when the progesterone first kicks in.
I'm so glad you were able to share the night with us (and that Jerry's boxed wine didn't kill you). You really helped make it special.

I wish I was your neighbour, Beckeye! I'd have these things all the time and I would not only expect you to attend every one of them, I would get you to help me move furniture.

Mostly I have a very accommodating family, Dr M, and some cool friends.

It all turned out remarkably well, Missy! Better than I could have hoped.

I'm so glad that the concert was a success for you and everyone. I love acoustic instruments, and in a small venue like yours they had to have sounded GREAT!

That is just so very awesome! One day I want concerts in my living room! Like, REALLY, REALLY want! :)

Are you available to host parties, concerts, dinners and so on at my house? If so, do I need to be there?

You're a wonder! Sounds like an awesome time. Who knew a zombie could be the hostess with the mostest?

I think you would really have enjoyed this, Lesley. Too bad this continent is so ridiculously huge.
It's actually not that hard to host a concert in your living room. You should do it!

Have corkscrew, will travel, Dale. Of course I would WANT you to be there when I host soirees at your house, but if you simply cannot be, it will give me free reign to snoop thoroughly.
Have your people call my people.

wow. very cool. I think that would be a blast. If I wasn't such a fuss ass I would try that. Although....my friend has 2 acres, maybe his house would work

Sounds like a lovely night! Wish I were there to help you with the chairs (I had a post in my old blog about how I inadvertently acquired a plethora of folding chairs) and to help make a dent in the wine-- I love Zinfandel (the red, not the icky pink stuff, like you pointed out).

Your friend's house would be perfect, Kelly! You could even hold the concert outside (amplified!).

We need a neighbour like you, Johnny, provider of folding chairs (just in case a wrestling match breaks out) and consumer of Zinfadel.

Wish I had been able to make it. This sounds like it was amazing! I've been sampling Olenka and her Autumn Lovers' music ever since you brought them to my attention and I must say I am liking what I am hearing. Also, post needs more pictures. MORE.

it would actually be a great place, they have a veranda that wraps around the house. I'm thinking we could turn it into a charity fundraiser except that would be work and it would lose it's atmospehere

More photos (and perhaps some video) coming up in the next few days, BAP. It'll be just like being there, without the jet lag.

That sounds like a fantastic spot, Kelly! A fundraiser is actually a great plan. It's a fair bit of work anyway...

I think that sounds like a ton of fun! The closest I've ever come to a house concert was a Christmas party where a bunch of the people grouped together, took out some instruments (guitars, piano, violin, drums, etc.) and started in on the music while everyone gathered around to sing along and cheer them on. It was a great time.

And what could be better - wine and a pie hanging on your door. You have amazing neighbors - and they must be thinking the very same of you. :)

That Christmas party sounds like so much fun, Todd! We've have some impromptu concert/singalongs break out at some of our parties too, and they sure bring everyone together.
My neighbours are pretty great and those who didn't come didn't even call the cops.