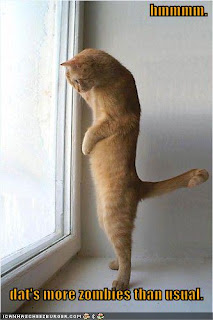 I was drinking coffee this morning, waiting for the OFKAR to wake up, and watching the two ginger cats that live in the apartment across the street playing together on the window sill. There's a lot of foot traffic on the street, and as two men walked by on their way to work, one of them spotted the cats, pointed them out to his friend, and then, in a move that utterly melted my heart, waved at the cats.
Here I thought I was the only person who ever waved at cats.
A few hours later, I stood gazing in satisfaction at an empty and immaculate residence room, one that was completely unrecognisable from the rather terrifying sight that had greeted me the day before.
We did it. We got the OFKAR packed and moved out of residence in the time alloted. And it looks as though everything that we are schlepping back to Calgary will fit into the four suitcases and three carry-ons that we have available. Tonight we redistributed all the books amongst the suitcases, in the hopes of avoiding paying an overweight baggage charge. Tomorrow we will find out how good we are at guesimating what a 50 lb bag feels like.
Posted by Barbara Bruederlin at 9:33 pm

Aw. That's sweet. I wave at our family dog, but usually not others. I should more often.

Just remember, if the suitcase can stand on its own and not tip, you'll typically be in the clear. I've learned my lesson in overweight baggage over the years.

Safe travels back to Calgary tomorrow you two!!

Hell, I even flirt with cats.

Does it have to stand be able to stand on the narrow end, Al, or just regular placement? I think we may just be okay.
I have a tendency to ask dogs how they are doing, they usually just smile back.

Thanks, Dr M, and we will try to get all those suitcases full of books and dirty laundry back safe too.

Cats are notorious flirts, John. Evidently you are too.

Eventually, you'll have moving the OKFAR back and forth down to a science. You'll be able to write an article titled, "Moving Your OKFAR Back and Forth."

I wave at dogs. I usually just stare cats down and then give them the finger.

funny...i woulda thought you were the only person that waved at cats too

I could even end up on Oprah with my best selling self-help book, Charlie. She apparently loves shit like that!

That's only fair, Beckeye, because you know they are giving you the middle claw right back. It's what cats do.

There's a whole secret society of us cat-wavers, Kelly. We also apologize to furniture.

One of my kitties loves sitting in the window ... I wonder if anyone waves to him.

Hi, Teena, welcome. I'll bet everybody waves to your kitty. Apparently we kitty wavers number in the tens!

and at least 2/3 of one in every smaller town, Kelly.