here's your ticket, pack your bag, time for jumping overboard 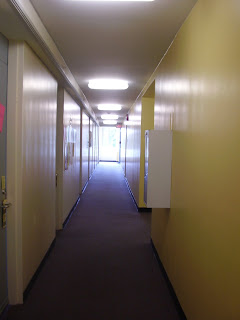 It's a little breezy here, and if you are strolling on the shady side of the street, you sort of wish you had worn a sweater, but the trees are all fully bursting with verdant greenery and cherry blossoms are starting to give way to the next bout of blooms.
Even though we spent the day in a pretty filthy residence room, I would far rather be here in Vancouver than dealing with some of the horror stories I am hearing from storm-battered Calgary. Evidently it's not too bad in the south, where we live, but people in the north part of the city have been paralyzed by 4 foot snow drifts.
In the OFKAR's rez room, meanwhile, the drifts only ever got about waist height.
It took us about 4 hours of pretty solid slogging to get her stuff packed and loaded into the storage unit. Around about hour two, it got a little overwhelming, but nobody died and nobody said anything they would regret later. As a bonus, it looks as though all the stuff that we are schlepping back with us will indeed fit into the allotted suitcases. Hopefully we won't have to pay any overweight bag charges, but we will worry about that later.
For now, we are looking forward to dinner and a relatively early night.
We have a big day of dorm room decontaminating in store for us tomorrow, but with a little luck and good planning we will have enough time left at the end of it for a final stroll down Davie. We're hoping to come across the old guy in the leather Planet Hollywood jacket again. He was sure pimping for his lady friend last night and one can only imagine his Friday night (cane-assisted) swagger.
Posted by Barbara Bruederlin at 5:00 pm

Four foot snow drifts? That's just wrong. I've already been catching brook trout out here. Mayflies are emerging and everything is early early early. Whatever did Calgary do to piss off old Ma Nature so badly?

Ah, the memories you are bringing to my mind. Our daughters have such similar genes in terms of accumulation of random stuff. I have a perfect cartoon on this topic waiting for Daughter #3 ...wish I could share it on your blog.
Have fun, girls!
Berni

Hi Barb - sounds like you are holding out well with the dorm room decontamination. I hope my fair city has been kind to you and your wonderful offspring.

verification word = "sockfu" which we all know to be the ancient martial arts technique of wacking your opponent with a sock stuffed with ping pong balls.

It was very satisfying to plow through all that crap, John, and I slept like a proverbial log last night. (Is there a proverb about logs?)

I can only suspect it has something to do with the tar sands, Mr Anchovy. You knew it was only a matter of time before Mother Nature figured out the head offices were all in Calgary.

My child and your #3 have uncannily and disturbingly similar approaches to organization, Berni. I fear you are right and there is a mess gene buried somewhere in our Germanic orderliness bloodline.

Your fair city is utterly gorgeous, as always, Matthew. I just wish I had more time to do some visiting in amongst the packing and cleaning. Next time...
The last couple of days, I have been using the alternate definition of "sockfu", the point at which one gives up trying to find the mates to all those balled up socks under the dorm room bed and throws them all into a suitcase anyway.

I hope cleaning the rest up today didn't take too long, and that you're still able to enjoy the eve. It is quite glorious out today.

Great to see you last night! :)

A few hours of greasing up the elbows and the place was unrecognisable, Al, with time to wander down Davie for a Vera's burger for dinner. Sort of the exact opposite of last night's dinner.