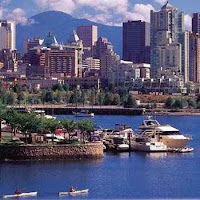 I came fully prepared for five days of rain and so far I have not even carried an umbrella, let alone unfurled one, and it's not like I have not been spending all day every day walking about outdoors.
On Friday night, the OFKAR suggested having dinner at East is East, a wee restaurant that she had been hearing about in Kitsilano which specializes in Tibetan, Indian, Persian, and Mongolian cuisine. We shared a table in a pillow and drapery laden alcove with two other couples and followed their example by ordering the roti roll specials. If you ever go there, try the lamb and spinach roti roll and the dahl soup and make sure to have some of their amazing chai. I recommend the Roiboos.
The it was over to the historic Waldorf Hotel to hear the Mud Bay Blues Band in the fabulous Tikki Lounge. The bloggers were out in full compliment - Mel (who deserves kudos for finding this great space and who should really have a star ceiling and fake palm trees in her room), Al and The Boy, with the delightful Todd in tow (blogger meetup #18, yo, and an absolutely delightful person), and the always wonderful Matthew. We gabbed and head bobbed to the blues and admired the thatched wallpaper and ate the cherry chocolate chip cookies that Mel had made. Because nothing says tikki bar blues like homemade chocolate chip cookies.
Saturday's brilliant weather enticed the OKFAR and I to wander down to English Bay, passing several dozen dogs and gangs of pigeons with attitude. There was debate over whether the best sighting was the woman with the ultimate mullet or the old lady in purple yoga pants who was spotted roller blading whilst talking on her phone.
In the afternoon we met up with Al, The Boy, Todd, and Mel and trekked over to Granville Island via water taxi. That's the way to get around this city, as far as I am concerned. Much less stressful than trying to find the right bridge and far more scenic. Granville was packed and very touristy, but a smorgasboard for the senses and something you have to experience at least once whilst in Vancouver. Rugelach, beer tastings, two-story toy stores, one-man bands, earl grey chocolate, Blue Steel, cement trucks, and the biggest grapes I have ever seen.
And because Al,The Boy, and Todd were also staying at our hotel on Saturday night, we had a leisurely wander down Davie, where we ended up at our usual Indian restaurant for dinner, followed by cupcakes and gelato at English Bay and a walk along the ocean to observe Earth Hour. We didn't see a whole lot of lights being turned off, but at least we knew we were doing our part by functioning solely on aloo gobi and cupcake power.
I am chagrined to admit that, despite much blustering, I did not in fact kick ass during the games night that followed. I don't know if it was simply that the butter icing was slowing my reflexes down, or if really is time for me to turn the throne over to a new generation of board game champions, but my response time was decidedly sluggish and I did not even come close to winning the spoils during the Cranium and Trivial Pursuit challenges.
But dag nab it, I can still motor up those hills with the best of those young whipper-snappers.
There's an opera singer staying down the hall. I heard him practicing this morning. I love this hotel.
Posted by Barbara Bruederlin at 10:50 am

Email ThisBlogThis!Share to TwitterShare to FacebookShare to Pinterest
Labels: despite appearances we are doing more than just eating, the great Vancouver mini-break

My legs are still feeling the workout from yesterday. Makes me feel okay about the ridiculous amount of food we ate.

It was a great day, I'm so glad we stayed over last night. I throughly enjoyed games night - Family Guy! - we will have to do that again sometime.

Hope you enjoy the rest of our visit. Glad you're coming back soon!

Meh. Without the rain and robbery, it's just not Vancouver.

Why does every picture of every place that's not in the US look so clean?

It was an insane amount of food, no question, Al. I think not even the 7 hours of walking that the OFKAR and I undertook on Sunday could burn that off.
So glad you stayed in the hotel too. And that we now have a new standard answer for everything.

Vancouver has heard you, John. You'll be happy to know that the rain has returned and that the listing price of the condo we toured yesterday was nothing short of robbery. Yay Vancouver!

You don't think we'd show you our scummy photos, do you, Beckeye? You'd never come and spend your greenbacks here otherwise.

I totally miss Granville Island & the market. I used to love that place and go there just for the experience after school on Friday afternoons. Aren't the cement trucks a hoot?

They were completely unexpected, WC. Loved the food markets at Granville Island. Such an amazing selection.

I am glad that you are enjoying yourself and all, but there appears to be far too much sunlight in Canada. This simply will not do. I am deeply disappointed in you people.

I was in Montreal on the weekend and Earth Hour seemed to be a non-event there, as well.

Vancouver would be the place for you then, BAP. Sunshine is a relative term there.

That's rather disappointing, isn't it, Remi? I hope it was a great trip though!

It was, rather, Gifted.