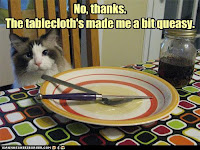 What kind of self-respecting feline does not like canned cat food? Mine, apparently.

After years of being on the slightly girthy side, she now needs to put on a bit of weight, so the vet sent me home with an assortment of cans for her to sample. You'd think I was trying to force-feed her a spoonful of cod liver oil. (Actually she would probably like that.)

I open a new can, making a bit of a fuss of how great it smells and allow her to sniff at it, which she thinks is pretty great. But when I plop a bit into a bowl, she immediately becomes suspicious, skirting widely around the bowl, stretching out her neck to get a closer look, while still allowing for a quick getaway if needed.

Finally she circles in for a little taste, but for a cat who has no problem crunching through a mouse's head with great glee or dispatching an entire bird so that only a couple of feathers are left floating in the air, she sure is retarded when it comes to eating soft cat food. She can't seem to figure out how to eat it. She'll lick at it for a while, and then get bored and walk away from it. I've tried mixing canned with some kibble to make it easier to pick up, but by now she is entirely not sold on this whole canned cat food business.

I also got some samples of a calorically-dense kibble for her to try, so I have been hand-feeding her this large kibble one piece at a time, just like the treats that she normally gets. For a while I thought I was going to be adding "cat feeding" to my skills list on my resume and was already envisioning myself having to turn down social engagements in order to stay home to hand-feed the cat, but fortunately she has now figured out how to eat the kibble from the bowl. A+!

But if you see me buying a couple of budgies and mice at the pet store, just don't ask, okay?

How weird is your pet?
Posted by Barbara Bruederlin at 8:23 am

I always thought it was funny that our family dog Sam, the size of a large football, never had a problem eating food (she's like a hoover), but my old roommates dog, Skeena (part Husky/Lab) was a very picky eater and ate kibble that was half the size of Sam's.

As for weirdness, Sam licks her paws like a cat would (and for hours) and visitors find this odd. We don't, but we're a clean bunch.

Perhaps your cat is a distant relative of Morris, which explains its finicky natures.

My dogs would give anything for canned food! They're stuck with dry kibble though.

Rebel and Parker have learned to take the initiative when seeking treats. They corral me in the kitchen and when I don't respond fast enough they direct me to the goodies in the laundry room, each very vocal, very pushy.

a few suggestions...
Add some oregano.
or, if that doesn't work...
top it with a few Temptations cat treats...
or, if that doesn't work, there's always the option of cracking open a can of tuna and mixing some of that in...
or if that still doesn't work, next time you cook chicken, make a chicken breast for the cat, cooked in a little water with oregano...chop it up and keep it in the fridge...
If all those things don't work, maybe raise mice in the guest room

What an endearing image, little Hoover football Sam licking her paws like a cat! No wonder she is such an important part of your family, Al.
I sometimes wonder how Skeena is doing without you there to keep her company. Didn't she used to help you paint?

I guess cats are finicky as a rule, Beckeye, which leads me to suspect that they all channel their inner Morris from time to time.

Hi WendyB, welcome. Send your dogs over here! I have several opened cans of cat food nobody wants.

Those pets, they know where the treats hide, Leazwell! It's one of the first things they figure out. Do Parker and Rebel think that it's treat-time every time you enter the kitchen?

Oregano? I wasn't aware that was something that cats liked, Mr Anchovy. Is it a similarity to catnip that they like?
Thanks for those tips. I shall try them. They sound healthier than letting her lick peanut butter and cream cheese off my fingers.

Me too. I miss her. She did keep me company while I painted and sketched outside. I hope to make it back up to Smithers before I leave the province and I will be making a housecall. :)

We had a cat when I was a lad and she was a mouser too. She loved mackerel as a treat, but would never eat kibble--the canned stuff only. Unless she was already full on mouse mousse.

As far as our canine critters go, don't get me started. Hoovering doesn't begin to describe them.

Barb, you are such a good mother to Sputty.
I have fond memories of Nomie's love of carrots...so much so that she would dig them up herself in our, or the neighbour's, garden.
Berni

My cat wont eat it either...she gets all retard excited about the aroma....then i put it down after shes near trips me to get to the bowl and she doesnt know what to do...she will LICK the liquid out but thats it...mixing it with crunchies doesnt help either....
Ohhh but put a plant anywhere and she will mow through that like theres no tomorrow. Ugh.

Our last cat got reallllly ill and i spent a month syringe feeding him wet/watery food to try and keep him alive bc he went anorexic and eventually was all blind from starvation and couldnt walk etc...although always had the strength to shred the shit out of me trying to feed him...ohhh that was a stressful time...we had a lot of syringe/food mishaps and were forever finding dried cat food in odd places from when the cat would turn his head and the food would go all over the damn place....

Jake the jerk dog is so easy...I will never let him read about the fussiness cats get away with

She's such a pretty dog, too. I bet she will be thrilled to see you again, Al. Be sure to bring your paint box.

I have often been tempted to replace the central vac with a dog, Charlie. But how are they with sucking up dog hair? You see my dilemma here?

Nomie was so funny with her carrot addiction, Berni! Remember when she stole the nose off the snowman?

My cat does the same thing with canned, Jen, will lick all the gel off and then get the hell away from it like it's going to bite her.
I've never had to syringe feed a cat, but I did have to give a subcutaneous drip to our old cat when he got sick. That was challenging.

But you do have to buy him pink My Little Ponies at garage sales, Kelly.