night of the living circumpolar dead 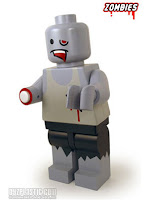 Is there some new cultural phenomenon going on that I should know about? I ask because I have had an inordinate number of hits on my blog over the last couple of days from all over the world - about one quarter of the United States of America, Britain, Romania, Saudi Arabia, Scotland - all looking for the same thing.
Swedish ice zombies.
And one person who was looking for "she's just an old hag gettin eatin by zombies", but I suspect they are not related.
At first I thought that perhaps the Norwegian zombie Nazi film, Dead Snow, was enjoying a meteoric surge in popularity. The OFKAR suggested that maybe that film was benefitting from some sort of reference during the Academy Awards, but unless it was part of the bizarre interpretive dance presentation, then I missed it. And besides, you do not want to make the mistake of calling a Norwegian Swedish, trust me, even if we are talking about zombies.
I have also had quite a few hits recently which were looking for "sex in the ice cubes" and I am sure that many of the seekers were disappointed when they landed on my review of Terry O'Reilly reading from his book, The Age of Persuasion. But again, there is nothing to suggest that the Swedish zombies are actually fornicating in the ice, nor that the in flagrante delicto depictions in said ice cubes, in the latter case, involve the brain-activity-challenged in any way.
For a fleeting moment I thought that perhaps the occasion of the Arctic Winter Games currently being held in Grand Prairie, Alberta was the trigger. But I have been following those games on our local CBC radio show and although there is much coverage of the intriguing sports of knuckle hop, kneel jump, finger pull, and snow snake, there is no mention of undead slaying being added to the list of competitive sports this year.
So I am stumped. Intrigued, but at a loss as to what people could possibly be looking for.
What are some of the more imaginative or perplexing keyword searches that have brought people to your doorstep?

I know you must have some doozies.
Posted by Barbara Bruederlin at 8:46 pm

Email ThisBlogThis!Share to TwitterShare to FacebookShare to Pinterest
Labels: sex icecubes and zombies, what brung you here

I was just going to post about this too!! My hits have tripled over the past week, and I can't seem to find a pattern. It's certainly perplexing.

This happened once before when I did the Music Meme and I have lots of teenage girls looking for pictures of Billie Joe and Spencer Krug, but once I removed that post, all was well again.

You have to admit, that's an iconic picture, Mr Anchovy!

Tripled? Makes you want to do some digging, I'll bet, Al. Any chance you've been talking about bacon? People love their bacon.

I don't use a site meter because I don't want to know about all the sickos touching my pristine blog with their filthy minds.

Funny about the Norwegians and Swedes. Back in the ninth and tenth centuries, all Scandanavians were known as Danes--and when in battle mode, Vikings.

Well if it's only their filthy minds that are touching, you are getting off easy, Charlie. But yes, tomorrow night is Filth night! So to speak.
I had no idea that Dane was the generic term for Scandinavian people! You are a wealth of information.

Is it not endlessly fascinating to view the Keyword Analysis entries on one's blog? The mere mention of any sexual proclivity always brings a flurry of new readers to the my site. Strangely I too have seen an increase in visitors on my virtual doorstep. Finding me via- "Should I buy a twenty five year old trailer?", "wankers" and "Wrinkled Iggy" (Mom I've told you, just google my name...)

Sheesh.... Anyway, very curious stuff. I love it when people google opinion queries. Effectively treating Google as a digital magic eight ball. The world will never have to make an independent decision again!

"Google told me to do it" will become an iron-clad defence in criminal trials, Sean. And after all, isn't that what Google wants, people blinding doing what they are told to do?
Still though, it is becoming clear that you really need to shift your focus and start publishing a sex blog. Either that or a truck and trailer trading blog. It's what the people want.

scroll down for breaking news on swedish ice zombies:
http://news.yahoo.com/s/afp/20100308/lf_afp/swedenhistoryshippingwreckgaspipeline
personally, i feel the biggest threat is pirate zombies...

I don't think I have that keyword analysis feature--I just have the basic sitemeter. But hey, I think zombies are all the rage these days.

"Swedish ice Zombies" - a cult classic in the making! See Bjorn and Freda run for their lives, taking refuge in an abandoned Ikea, while the frozen hoards of hungry Zombies amass outside moaning for brains and cheap semi-disposable do-it-yourself furniture!

Strangley enough, I also get hits from people searching for the Johnny Cash middle finger (from a piece I did on "flipping the bird" ).

It's hours of fun, D! Statcounter has that function and it's free. I don't know what I would do if I couldn't determine how many people were looking for "William Reid's hair" in a given day.

I'd buy an extra large popcorn to see that one, Matthew. (Actually it sounds like a great film premise, I think you may be in the wrong business)