the world that you need is wrapped in gold silver sleeves 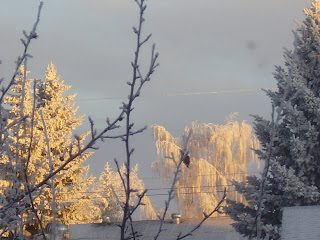 The city has been wrapped in hoar frost for an eternity. Visually stunning it's been, with those branches tinted an impossibly persistent puffy white. A week in, though, it's become almost oppressively monochromatic.

The sky, normally the painful blue of the high-plains desert, has been stained a permanent white. Shrouded branches raking the cloud cover have only allowed more white to bleed out onto the permafrost. Ice ruts lining the streets in rhyming couplets hide their jagged edges beneath the shimmer of new snow grains. 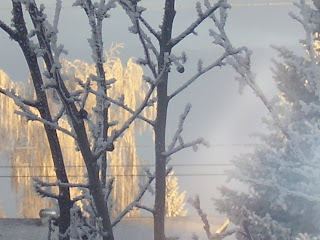 Nobody bothers to shovel anymore. It's really only frost, after all, not proper snow.

Today, the sun returned, its spewing solar plasma reminding us just who determines the seasons. Not yet time to straddle the divide between supernova and red giant, Ra breathes a tale to Helios and hurls flares at the terrestrial prison of ice.

And branch by branch, life is released.

Posted by Barbara Bruederlin at 1:44 pm

Email ThisBlogThis!Share to TwitterShare to FacebookShare to Pinterest
Labels: screw you winter

Oh, I love hoar frost. I hate the conditions that cause it, but I love the hoar frost itself. Last year we had some spectacular stuff, and earlier on this winter, we had more, only less spectacular. Both times I was in awe of what Mother Nature produces.

Yeah, but you don't really believe it's springtime in Alberta yet, do you?

hey, do you know that tune, Springtime in Alberta?
http://www.youtube.com/watch?v=LXJ09tHMKFA

Hoar frost really is beautiful and we don't get it here all that often, WC, but we have had the exact same grey, foggy, frosty day for a week now, so today's sun was a nice break.

I do indeed know the song, Mr Anchovy, and I don't believe for one minute that it's springtime in Alberta. That happens in June.

You made it sound so beautiful! We just have ice...ice and snow, ugh!

I don't care what you say, it's beautiful.

URBAN BLONDE said...
This comment has been removed by the author.
8:30 pm

Thanks for stealing the first blog post idea I've had in months. :P That'll teach me to take pictures with my phone in between phoning Calgary Transit wondering where the F*^% is my bus at 7:30 am.

I'm steering those who would much rather read your most eloquent words instead of my inane drivel away from my blog and to you my dear.

It's pretty because it's not outside my window. ;)

Actually, I am looking forward to seeing some ice on trees at the Falls this weekend.

I hate when ice ruts line the street in rhyming couplets.

It's very easy for me to enjoy looking at these photos as Toronto has not had any significant snowfall this year. The times it has snowed, it has melted about a day later.

[As I type this it is snowing for the first time in weeks] - hope it doesn't last too long and you get some colour back in the landscape!

nice, all we have are stupid, crocus's, snow drops, and even iris's coming up early

We've got tonnes of ice too, Maureen, mostly on the roads and sidewalks.

It is pretty, I have to grudgingly admit, Dr M.

You always make me laugh, UB! Your muse is a late bus! Speaks volumes, my dear.

The falls will be beautiful, this weekend, Al. But I'll bet you won't be able to walk three steps without tripping over another freakin heart.

And when people make lame prose out of them like I just did, John. I know that line sort of makes me cringe!

I heard you were having a wintry evening, Todd. You folks are welcome to keep it for a while though, because we are all heartily sick of it.

Kelly, just shut up. Or I am going to show up on your doorstep with my suitcase and then where will you be, smartypants?

Your poetic words really do this odd meterological phenomenon justice my friend. It is one of the few encouraging signs among the harsh realities of winter that I really look forward to. Much more rare around here its appearance eliciting the ooh's and ah's of an early summer fireworks display.

p.s. Those road ruts really aren't so bad. Imagine adding speed humps to the mix. It's like a day at Canada's Wonderland driving to work!

The line is fine the ruts are not. The ruts can go to hell.

Posting today wasn't on the radar, just more snow here, but your pictures made me realize winter's enchantments never get boring.

Have you ever considered blocking off your road on weekends and charging admission to ride the speed humps, Sean? It could fill the void left by the demolition of Wally World. Did you notice how I tastefully avoided any mention of filling the public's need for a speed hump right now?

You're too kind, John; I still think the line is lame. But I totally agree that the ruts can go straight to hell.

You've had an insane amount of snow in your area, Leazwell. I hope at least the dogs still love it.

Was that a Rogen laugh you just did, Beckeye?

That corner on the highway with the church and all the big trees would look absolutely gorgeous, Berni! I hope you took pictures.

Chances are I would, XuXu. Any zombies over there?

What's all this about hoars? All I see is a buncha trees.

Actually, I think that second photo is incredible, BTZ.

The hoars are hiding behind the trees, Charlie. Glad you like the photo, taken from my spare room/office window.

Beautiful picture of the frost lined trees...gives them a fairyland like appeal! Hope the sun is a shining there now...I hate dreary grey days...

The frost is all gone for now, Jas and it's been warming up a bit. Sun's been shining a lot lately as well.

Hoar frost makes the best pix, they are beautiful

Thanks, Gifted. Bad weather can be lovely.