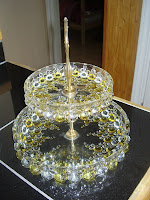 My only regret is that we never got to use this awesome dainties platter that we found in the cupboard. That and the fact that Paranormal Activity proved to be just plain lame and not one bit scary. Other than that the Martha weekend was an overwhelming success.
The cottage we rented was uncommonly lovely, nestled in a little wooded alcove in a suburb overlooking a golf course, which in turn overlooked a lake. Other than a weird hodgepodge of architecture on the landing leading into the loft bedroom, it was tastefully and comfortably appointed. There were books and games in every room and the owners even left a bottle of wine for us in the fridge. Or it could be that we were just in the wrong house.
We only left the cottage once, to go on a hike on Saturday afternoon, which turned into a bit of a cross country trek. One of us was not wearing socks inside her runners, and yet she was the Martha who led us across the golf course instead of following the road, and the only one who didn't bale and head back to solid ground once we started breaking through the snow crust and sinking in past our knees.
Fortunately there were bracing libations and hearty sustenance waiting for us back at the cabin.
Much arts and craftery was undertaken. Knitting, hat box decoupaging, collaging, and pen drawing with just a soupcon of paint chip art kept us out of the bars and around the kitchen table. You know the Marthas are becoming more mature when they replace dancing on tables with cutting up National Geographics at them.
But fear not, gentle readers, silly photos were still taken and will be forthcoming shortly.
While you are waiting, I would like to invite you over to New Canadian Modern, where you can read my latest article about some of the inventive ways in which some music collectives function. The Collective Good gives you a little bit of history, a little bit of social commentary, and a profile of an arts and music collective that's doing things right.

Tell me you don't want to read that!
Posted by Barbara Bruederlin at 4:31 pm

I DO want to read that!

And it sounds like a great time. Paranormal Activity really isn't scary? I just cannot do it.

Thanks for wanting to read, Justrun.
But sadly, Paranormal Activity is just plain bad. And not in a good way.

So disappointed in that Paranormal Activity review-- must resist the urge to strike it from my ZipList. I'd been looking forward to it. No chance that it's so bad it's good, is there?

Glad to hear you had a good time. And to think, you even had fun whilst decoupaging. You are quite skilled, my friend. Hey, wait a sec, this was drunk decoupaging. Okay, makes more sense now. Did any Big Rock labels make it into the mix?

Don't regret not using the dainties platter. It's much easier to stuff your face directly from the bag or box.

Doing crafts is a fine idea, but I would start to worry when everyone starts drooling while working on said crafts.

Sounds like you had all had a fabulous weekend, look forward to the pictures! It's nice being able to just stay in and craft and snack sometimes.

Oh,Paranormal Activity is a movie, I was confused for a second and thought you'd had a visit from a paranormal society or something at the cabin. One has been to the museum so that's why my mind went there, and I'm tired. ;)

p.s. if this comment shows up multiple times in your email its because Blogger is attempting to eat it.

Paranormal Activity might just be salvageable in the so bad it's good department, John. We got a few giggles and rim shots in amongst the yawns and the eye rolls.
I actually went decoupageless and concentrated on other forms of "art". But what a missed opportunity, using Big Rock labels. We really should have consulted with you first.

But sometimes we like to be all fancy whilst stuffing our faces, Charlie, although evidently it was not enough of a concern for us to actually do something to accomplish that level of fanciness. Drooling did happen though.

Hmmm, Facebook went all weird on me earlier and now Blogger is acting up, Al? Singularity! Possibly brought about by the unveiling of the iPad.
No wonder you had such a great turnout at the lecture the other night if you had someone talking about paranormal activity. People probably thought they were going to see a movie.

Ha. Close, but that lecture was on gold, and urban legends. More of a treasure hunter crowd.

Glad you had fun dear. I'll have to try the drunken arts & crafts thing, but I am intimately familiar with the inebriated snow hike. You just have to remember to be the one who packs the flask.

I just read your article about the art collective and I agree that is a very cool idea! I think we have something similar here in Rossland: a group of local painters and other artists (potters, textiles makers, etc.) got together, pooled their resources, and now rent a permanent space in downtown that they have turned into an art gallery to showcase their own work. They staff the place themselves. It's very grass roots and there is a lot of nice stuff in there.

I'm glad your weekend was such a success!

It sounds like you have some really interesting lectures, Al. I wouldn't mind taking in one or two of those myself.

How was the Groundhog Day party, Doc? I can't think of a better reason to throw a bash.
Drunken crafting on the heels of an inebriated snow hike is the ultimate weekend activity.

I would love to see the arts and artisans collective in Rossland sometime, WC. I love the ingenuity and teamwork that allows for the creation of these great places. And I think that sort of effort is even more important in a small centre than in a larger city.