things what puzzle me 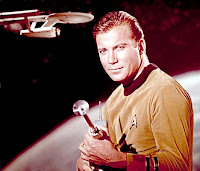 the Shatnerization of the CBC -
Don't get me wrong, I love Bill Shatner. Doesn't everybody? But lately it has become clear to me that certain CBC radio personalities must really love Shatner, so much so that they have begun speaking in that patented Shatner-speak.
Jian Ghomeshi is the worst offender. His introductions on Q are ripped right out of the Rocket Man page book. I've also noticed Stuart McLean veering down the Shat-path whilst reading his little Dave and Morley stories on The Vinyl Cafe.
Sketchy, gentlemen, sketchy. Nobody out-Shats the Shat.
shoe squeak equalization -
Now that my other running shoe has started squeaking as well, it no longer bothers me to wear them. I can handle shoes that squeak equally; I cannot tolerate a one-sided squeak.
Facebook personality changes -
Why is it that some people are unrecognizable on Facebook? I don't mean their profile pictures, I mean their personalities. Some people, who are perfectly normal in real-life or in other areas of Web 2.0, turn into lamer or more annoying versions of themselves on Facebook. Why?
Do I do this? You would tell me, wouldn't you? Or am I consistently annoying?
Posted by Barbara Bruederlin at 3:54 pm

Email ThisBlogThis!Share to TwitterShare to FacebookShare to Pinterest
Labels: brain farts, CBC is for thrill-seekers, Shatner

"Nobody out-Shats the Shat". Best quote of the year.

Uh oh...you've discovered that FB brings out my dark side.

A lot of people assume others don't check their live feed and are thus immune from their crazy. That's my guess, at least.

Often imitated, never duplicated, that's our William Shatner, Karen.
Actually I think you are exactly the same on FB. Long live the dark side!

I know I can always count on you to tell me when I have overstepped my crazy boundary, OFKAR. You're like my psycho monitor.

Just as I came to comment Bill pops up on the closing ceremonies of the Olympics. Wow. He is everywhere.

Ah, the phenomenon of the internet "persona." As we discussed before. It happens. I am used to it.

If we ever meet face to face, you might be shocked!

What incredible timing, Al. It's almost as if he was channeling the power of the Shat, which you know he can do.

I might be, WC, as might you. But it seems to be more specific to FB than to other forms of social media, although I suspect that Twitter would be even worse, and I think it is due to the incessant updating of the minutiae of people's lives.

jian gomeshi is one of the things i avoid on cbc. Numerous times I have heard him ask a guest a question and then expand on that endlessly trying to answer the question himself before the guest gets a chance to speak...when they say something like "what was the question? or what?"

That's why I could never do that job, Kelly. I can make up the longest most convoluted interview questions you can imagine.

I cannot stand Vinyl Cafe, McLean or any of his schlock - when I hear him praised as a national treasure I wonder if I do not belong here.

Jian, I'm warming up to, although he could still cull some of the smarm and those intros - uck.

You're preaching to the choir, Gifted.

hey auntie, believe it or not, i out-shat the shatner, in bolivia this summer, twice in one night! but that, of course, was after drinking tap water by accident.
TMI? oh, yeah.

Oh Jane! If anybody could out-Shat the Shat, it would be you! You really should have stuck to wine, you know.