the strange dust lands on your hands 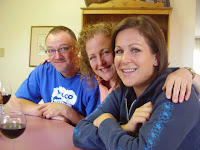 We woke to the news of the earthquake in Chile and that the epicentre was very close to the coastal town where my niece has been living. Nobody in the family had been able to make contact with her. But after a couple of hours of worry, we heard that she had somehow managed to contact a friend and let him know that she was safe.
We still haven't heard directly from her, but we have learned that the tsunami which flooded the town after the initial earthquake did crash against the walls of the house where she lives, that they are still experiencing hourly aftershocks, that people in the town have died.
And we thought that the biggest emotional turmoil we would be feeling today would be when we took the Resident Offspring to the airport for her return to university.
For a Saturday, it sure feels like a Sunday. Now I understand how Morrissey felt.
Posted by Barbara Bruederlin at 8:19 pm

Email ThisBlogThis!Share to TwitterShare to FacebookShare to Pinterest
Labels: hug your loved ones

I hope that you are able to hear directly from her soon. I can only imagine how scary that would have waiting for the news this morning. At least you have some details to go on at the moment. Thoughts are with you guys.

p.s. I was just adding Viva Hate to my new computer. Music synchronicity.

How scary that must have been! I hope you hear from her directly soon. Thoughts and prayers to you and yours.

Oh my goodness that is so worrying! I hope someone hears directly from her soon to set your mind at ease. Positive thoughts and strength sent your way!

xx
PS I didn't know that E was in town? Was it reading week? Dang I really need to get my shit together!

yikes, scary stuff. What is she doing down there?

Glad your niece is OK. It seems the earth is shaking everywhere these days.

Still no direct contact, Al, but communications are really sporadic. We're grateful that we know she is okay, though.
Ahh, Morrissey is the key to launching singularity. As I always suspected he would be.

Thanks, Lesley. Hopefully today will bring some good news.

It was actually reading two weeks, UB! They got an extra one on account of the Olympics. And did they ever fly by.

It feels like it is rattling right off its axis at times, Mr Anchovy.

Ack! I hope she's all right. Same goes for all the Chileans!

Earth appears to be cracking up from inside as well as here on top.

Thanks, Dr M. Sadly, the death toll is rising.

Maybe Roland Emmerich really is a visionary instead of maker of lame disaster films that we had him pegged for, Charlie. He predicted some of this in 2012, didn't he? Now we just need John Cusack to outdrive those earthquakes.

I Hope that you have made contact with her and that she is okay, and I also pray to God that all other people are safe as well.

She was able to talk to her sisters recently, Jas, thankfully. She's well but very sad for the Chilean people.

Barb, Jane just called us a few hours ago. She made it to Santiago to contact people as the power is still off in Pichilemu. She said there is not a scratch on her, just that she is shaken from the terror of Friday night and the run up the hill. Chileans are coming together as a family, supporting all and that is what she is staying to do. Berni

I'm so glad that you were able to talk to her in person, Berni, and so proud of Jane that she wants to stay and help Chile.

I'm so glad to hear that update from Berni.

So glad for the update and happy to hear she will be able to help.

It was a big relief, John.

Hi, thanks for the tips. That was a great help to me.I really like this blog, It's always nice when you can not only be informed, but also get knowledge, from these type of blog, nice entry. Thanks

hey there, all!
thanks for your messages of support for my auntie barb, and thanks for your blog post, too, auntie.
the last week (and 18 hours, and 21 minutes) has been a long one, but my 'family', friends, and i here are getting through it. when you hear about natural disasters on the news, it's sometimes hard to envision the people it affects in terms of 'real people'. this last week has made me think in that way, completely.
these are real people. these are friends, colleagues, students, neighbours, etc, etc. this is my town. this is my (adopted) country.
it's overwhelming and often difficult to comprehend. but chileans are a strong, familial culture, and like i've said to many people in this last week, i take comfort in the fact that i KNOW how generous and community-oriented people are: neighbours help neighbours, and not 'help' in terms of a cup of sugar, but 'help' in terms of a roof over their head.
there's a long, hard road ahead. but things will get better and people are working together right now to make that happen.
so, yes. hug your friends and family! be thankful for what you have. take care of each other.
abrazos gigantes, y fuerza chile!

I'm so glad you took the time to comment here, Jane, as I know that you have a few other things occupying your mind and your time these days.
We have been hearing stories on the news lately about the closeness of the Chilean people, about people banding together to share resources, to protect each other, and sadly to dig out bodies. Pichilemu was even mentioned on the news reports a few days ago.
I am so proud that you are staying to help your Chilean family. I know it's not easy and there is danger still, and our thoughts are with you and with Chile.