people of the year 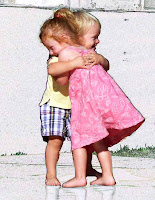 You're the reason that I blog, you know. It's not so much that I have anything terribly profound to say or even that I have a burning need to express myself. For me, it's all about the connections.
And much as I enjoy our online exchanges, what I really love is when I get to meet some of you in person. Granted my first blogger meetup was a bit of a wank-up, but I am really glad that I didn't let an encounter with a deranged person stop me from agreeing to meet more bloggers, because it's all been gravy since then.
2009 was a boffo year for meetups. My most bountiful year ever. Not to rub it in or anything, but I put ten notches on my blogger meetup belt this year. (disclaimer: although I technically have two belts - blogger and BLIP - for the purposes of this braggy post, my scores will be tallied on a single belt.)
My bloggies, let me show you them, in chronological fashion:
Allison - We've been close friends for a couple of years, we even staged a coup and quit a blog together, which was awesome fun and very empowering, but until February had never met in person. To have Al and her gentleman friend stay with me for a couple of days on their cross-country odyssey was a dream come true. To get together again in November, was aces.
Mel - Just as vivacious and bubbly in person as she is online. Since we had three trips to the west coast this year, this meant an unprecedented three Mel meetings. And there is no such thing as too much Mel. It sure would be nice if she still blogged, but I guess Facebook counts too.
668 the Neighbour of the Beast - I didn't even know we were going to have the chance to meet, until Mel managed to wrangle her into joining us for a massive meat feed at the barbeque restaurant that seems to have become one of our destinations in Vancouver. There is no bullshit about this lady and she's got a wicked sense of humour to boot.
Toccata - Not only did we bunk in at her place in Victoria, she even gave us her room. Her cat was a little freaked out by our presence, as was evidenced by the little clue she left on the living room floor, but other than that the hospitality was above and beyond. I wish she would start blogging again though.
Jen - We go back a long way in the blogosphere. Jen was the first blogger that I ever put on my blogroll and yet she has never even shown me her dill pickle ornaments. She makes up for that oversight with a delightfully filthy mouth though. And she picks good Japanese restaurants too.
Susan / Jeff - They are actually BLIP friends of mine, who are married to each other. They both have incredible taste in music and when we met briefly at the Calgary Folk Festival this summer, they absolutely enchanted me with their charm and cuteness. Since then we've been concerting with Susan and dined with both Jeff and Susan and their charming brood. I love when people live in the same city as me. You should all move here.
John - The whole Mutford clan, actually. And all the way from Yellowknife too. Quite possibly the cutest family who ever sat in our backyard and swapped lies with us. And discussed books, of course. Canada Reads really dropped the ball by not getting John on the panel, is all I am saying.
Sean - We quickly became close friends when we found we were constantly admiring each other's musical choices. Sean has demonstrated his generosity time and again, but when we were called out to London for a funeral this fall, he truly went beyond the call of duty, to the point where we no longer tied our own shoelaces without first phoning Sean to see if he wouldn't mind coming over to do it for us. And naturally, he didn't mind. To discover that his family is just as warm-hearted and hospitable as Sean was a bonus, especially since they appear to be a doppelganger of our family unit. Only nice.
Matthew - It's always great to meet someone whose musical tastes I admire, and to be able to attend a concert with them is the tops. A very thoughtful and open person, who also appreciates a good bowl of Irish stew.
That was my year measured in blogger meetups. There are far worse ways to measure the quality of a year, I think. I find it validating and life-affirming to know that very few bloggers (or BLIPpers) are ax-murderers in real life.
But if this keeps up, I am going to have to invest in a new blogger meetup belt. I would hate to turn down the chance to meet someone because there's no more room for notches.
So, tell me, do you have a blogger belt?
Posted by Barbara Bruederlin at 6:50 pm

Email ThisBlogThis!Share to TwitterShare to FacebookShare to Pinterest
Labels: blog friends, oh there will be lists

I should have gotten you some suspenders for Christmas to hold up that belt! What a great year you've had. Amazing reading it all at once like that.

Thank-you for your kind words. It was great getting to see your neck of the woods last year on our odyssey, it was the highlight of the trip.

I had the pleasure of meeting half the people on your list this year as well! And even better that I get to see most on a semi-regular basis (you are right - one can never have too much Mel). So really, what are you waiting for? Move HERE already. ;)

Thanks for the props Barb! I want to direct some admiration right back in your direction as well, not only for your sublime and impressive taste in music, but for being an overall fascinating person full of depth and intellectual curiosity. It was awesome meeting you in person and I hope to see you again on the west coast again sometime soon!

That is impressive! I've met the local bloggers wherever I've lived (and let's face it, there's been many places I've lived), but you are the only out of towner I met, even if I had to go to your town to do so. I'm perplexed by the "swapping lies" comment, though-- you mean you didn't turn down the role of Anne Boleyn in the Tudors?

I think I may just start carving an X on the wall for each meetup, Al. It's interesting how many of my blog friends live on the coast. So I will thank you to not tempt me with your invitations to move there, or I might just take you up on it.

I'm glad I was able to fool you into thinking that I have some depth, Matthew, but all hoextrel-ism aside, meeting you and sharing an evening with the group over food, drink, music, and companionship was absolutely splendid. We must do this again.

I have been very lucky this year, Mr Anchovy. Travelling a lot this year had the added benefit of bringing me into the realm of far-flung blog friends.

Oh no, that part was true, John, I lied about receiving the Order of Canada, but I guess you were going to find out about that eventually anyway.

It would have been infinitely better if I could have added you to my list, Dr M.

Well, we will see if 2010 holds a trip to C-town for me! It's entirely possible!

Over this past Christmas I was trying to explain to a family member that some of my best friends were virtual ones... Quite rightly I suppose it did elicit a furrowed brow but after I explained further it seemed to make sense to them. It certainly does to me.

One of the highlights of my past year was meeting you and the doppelganger family. Despite difficult circumstances it really cemented my belief in the powers of friendship. And how fortunate was I to make Allison's acquaintance in person this year as well.

It is remarkable to me the bonds that do develop over writing, music and reading. This is our commonality that opens our minds as much as our hearts. Especially one of solid gold like yours.

Here's to more Blogger meetups for 2010! These are the ones we must cherish.

I totally agree with your first paragraph (take a moment to re-read it and refresh your memory).

Your number of meetups is incredible—you must be one heckuva bull-shitter.

I do have a blogger belt. I think I've met 7 bloggers total. I could be forgetting someone.

Barb, you are too kind! We feel very fortunate to have met you and honoured to be included on your list.

We're looking forward to the 23rd, and hope to enjoy many more concerts and dinners with you this year- hmm, we could even branch out a bit- perhaps a plaid-shopping excursion one day? : )

Oh I hope so, Wandering Coyote! I would love to meet you!

They are indeed the ones we must cherish, Sean. We often have more in common with our online friends than we do with some people we may see regularly in real life, by virtue of the shared values, shared interests, and the opportunity that blogging gives us to explore those interests in a community.
Oh, and you're the one with the heart of gold. Mine is unquestionably tin.

You are obviously as much a social animal as I am, Charlie. And what a lovely group of people come here to visit.
I am not actually a very good bull-shitter, but I am very good at listening politely to bull-shit.

I knew you would have a blogger belt, Beckeye, because you have exquisite fashion sense.

A plaid shopping expedition is definitely in our future, Susan - great idea! Because there are a number of upcoming concerts that I will be trying to tempt you into coming along to. Can't wait to see you and the crew on the 23rd!