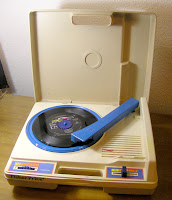 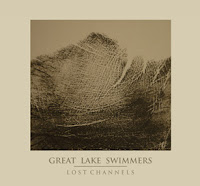 take the Polaris Prize this year, and many of us are still resentful that Tony Dekker and company did not take home the hardware. In Lost Channels, Great Lake Swimmers maintain their signature heartfelt beauty, with swooningly lovely songs. And that voice. And yet this album also stretches somewhat past the band's signature sound into more upbeat ventures. The only album that I can listen to on repeat in the urban assault vehicle four times in a row without even thinking of ejecting.
2. Infinite Light - Lightning Dust
- From the first instance I heard the first note from this album, when played by an intrepid DJ on BLIP earlier this year, I was smitten. And when that same intrepid DJ later gave me this album, I knew that not only did I have to delve deeper into this band, but I also had to re-examine the music of Black Mountain, from whence Lightning Dust members Amber Wells (she of the astounding vibrato) and Joshua Wells spring.

3. The Hazards of Love - the Decemberists
- The Decemberists toyed with the idea of a concept album with The Crane Wife, but with the Hazards of Love they take this flirtation one step further and offer a bona fide rock opera to the world. At times harkening back to seventies' prog rock, at times travelling far further afield to English folk songs, The Hazards of Love is a complete experience. It is also a lovely reminder of the band's appearance at the Calgary Folk Festival this summer, where they played the album in its entirety, without song breaks and with costumes. Glorious.

4. Nice Nice Very Nice - Dan Mangan
- It is no wonder that Dan Mangan won a shit-load of Bucky Awards this year. The world-weary raspiness of his voice transforms his songs about life's minutiae into sublime statements of the human condition. This is one of the few albums that has the power to make me sing along heartily one minute and burst into tears the next. In a good way, of course.

5. Hometowns - the Rural Alberta Advantage
- How can you not love an album that contains rhythmically-driven songs about local places that are not normally celebrated in song, ie that proud stalwarts of southern Alberta - Lethbridge - and that most haunted of locales - Frank, Alberta? Proud Albertan meets Toronto hipster. In a rollicking good way.
6. Oh Maria - Jon-Rae Fletcher
- This darkly sonic solo offering from the former front man of the late great party band, Jon-Rae and the River, is a concept album of sorts about a serial killer in love. And according to the musician himself, it's slightly autobiographical. Presumably without the killing part.

7. The Eternal - Sonic Youth
- This vintage-sounding album is classic Sonic Youth, with its tasty combination of distorted guitars, catchy hooks and extended trance-inducing instrumentals. Highly recommended for road trips across the prairies, it practically eats up those miles, and makes the passing of those endless telephone poles feel trippy and hypnotic without actually contributing to unsafe driving.

8. Winter Hours - Deep Dark Woods
- I picked this album up on a whim after hearing a single song on CBC radio and was thrilled with the unabashedly mournful murder ballads, with sizeable doses of blue-grass. The Deep Dark Woods are putting Saskatoon on the musical map with their beautiful dark harmonies. 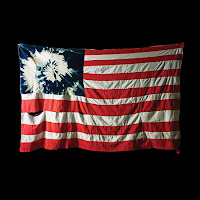 9. Set 'Em Wild, Set 'Em Free - Akron/Family
- An album full of the unexpected - stuttering space rock at times, heartbreakingly beautiful guitar ballads at other times. It all meets to make a joyously glorious organic sound, that leaves me craving more.


That was fun, let's do it again. The next nine:
10. Yonder - Tin Star Orphans
11. Oh My God, Charlie Darwin - the Low Anthem
12. Vancouver - Matthew Good
13. Timber Timbre - Timber Timbre
14. If I Don't Come Home, You'll Know I am Gone - the Wooden Sky
15. Noble Beast - Andrew Bird
16. Too Slow for Love - the Constantines
17. My Maudlin Career - Camera Obscura
18. Dark Was the Night - Various Artists
But if music isn't your thing, perhaps books are. Or advertising. Or books about advertising. If so, I invite you to click over to the Bookworm Collective to read my review of Terry O'Reilly and Mike Tennant's book, The Age of Persuasion.
And you thought I was just being a lazy sloth this year.
Happy New Year, my preciouses! May the year bring you joy, fulfillment and prosperity. And lots and lots of music.
Posted by Barbara Bruederlin at 1:22 pm

Email ThisBlogThis!Share to TwitterShare to FacebookShare to Pinterest
Labels: albums of the year, oh there will be lists, shameless self-promotion

Great Lake Swimmers is on my (yet to be written) list as well. A beautiful album lyrically as well, very hopeful and profound on many levels.

Of course, you continue to amaze me with some choices I hadn't considered yet - I'll be hunting down some Lightning Dust ASAP!

Happy New Year BTW - hope all is well for you and your family!

It was a very slow year in music for me. I couldn't dream of making a top ten list. However, I did listen enough to make a top two list:
1. Metric- Fantasies
2. Tragically Hip- We Are The Same

Of course, I feel like I'm losing indie cred (like I ever had any) with Hip support-- but who the hell else still listens to the Hip? No one. It's just me, the last of the Hip hold outs. We Are The Same proves they can still write amazing songs. "Morning Moon" is just beautiful.

I hope this year is the best ever for you, Wandering Coyote.

I was thinking of having a tumila for lunch, Matthew, but we were out of salsa.
I am really looking forward to reading your list. I find it astounding that so many of my music-minded friends have such profoundly different lists this year. There was just so much amazing music released in 09, that the choices were almost overwhelming.

I have nothing against the Hip, John, just because they aren't hip anymore. They have moved into the realm of quintessential Canadiana, elder statesmen, if you will.

See here's my career advice for the Hip (and I realize I'm hijacking your comments page with "non-musician advice for the musician" typical blogese): You've got it half right by stopping your efforts to try and break into the US market (you are above pandering and it shows). Now go the whole way and stop using Bob "Stadium" Rock to produce your albums. Get someone like Kevin Drew to produce. Granted I think Drew is every bit as arrogant as Rock, but at least he might take you in a new, or at least interesting, direction. We Are The Same was great, but I fear you got lucky.

Thanks for letting me vent, Barb!

I just sat down to listen to Lightning Dust this past month, I can't believe I let that album sit, unzipped on my desktop for that long. I completely agree with you - has you at go.

And Dan Mangan. Swoon. I love listening to him late at night whilst driving.

My pleasure, John. I appreciate a good rant. I think you make some good points too. There are more ways to measure of success than merely breaking into the US market. Besides, that's an old fashioned way of thinking.

I am guilty of the same thing, Al, of letting stuff sit unzipped for months. Especially this past year, with all the great music there was to be had.
I listen to both of those albums in the car A LOT, despite the fact that I don't drive much any more.

My fave was Carolyn Mark and NQ Arbuckle's Let's Just Stay Here. There were a lot of great discs out this year but this one just keeps winding up on the stereo again and again.

I'm planning on picking up the Dan Mangan disc in the very near future. I let it get past me until this past weekend when a friend was playing it in her bookstore. Now I'm hooked.

I was hoping to see the Carolyn Mark & NQ Arbuckle disc under the tree this Christmas, Remi, as it sounds like their musical connection is something quite special. I shall be looking for it.
And Dan Mangan's disc is lovely lovely very lovely. And really grows on you.