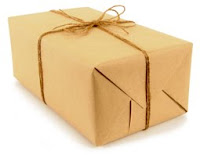 It's become a Christmas tradition at our house, albeit one over which we have absolutely no control or say.

Every year for the past five or six years, we have found a mysterious brown parcel on the doorstep or in the mailbox. It has been mailed from Calgary, from northern Alberta, from various locations in the US, and sometimes just hand-delivered. Inside is an ornament, rather large, always bird-themed, beginning with a partridge in a pear tree the first year and progressively working through the Twelve Days of Christmas song. A hostage-type note is the only accompaniment, citing the particular lyrics that fit the ornament.

The first year we didn't know quite what to make of it, of course. When we received two calling birds the second year we were even more puzzled. We quizzed everybody we could think of. Everyone disavowed any knowledge, of course.

This year, however, I suspect the puzzle may be unravelling. Last week, a courier tried to deliver a C.O.D. parcel which we had not ordered. It was addressed to us by our names, albeit mispelled, and originated at a company called Hobby Craft Kits in Cuba. We were all WTF and refused it.

A few days later, courier dude came back and said that they had contacted the company who had assured them that we would accept it. We still hadn't ordered it and it was still C.O.D., so again we refused it.

And then I realized we hadn't seen the mysterious Twelve Days of Christmas parcel yet.

If the Cuban parcel comes back to the house yet again, I am tempted to pay the ten bucks just to see if if there are six geese a-laying inside. And to try to cypher out where the order originated.

What would you do?
Posted by Barbara Bruederlin at 8:05 am

Email ThisBlogThis!Share to TwitterShare to FacebookShare to Pinterest
Labels: of course if it's anthrax I will be really annoyed, traditions

I'd sign for it! I hope he comes back, it'd be a shame to miss out on your parcel. And you say this is the fifth year? Five golden rings? ;)

very strange...I don't think I would take the parcel.

Does that note say 'favieons?' What's that?

We got the five golden rings last year, so I'm thinking geese this year, Al. I am still balking at paying delivery for something I didn't order, and which could very well be anything. Tempted and curious though!

Wise, Mr Anchovy. I'm sort of with you, being a naturally suspicious person. Plus I reject the assumption that I will pay for something I didn't order.

Come back, courier guy!
Hey, maybe it is six geese a-laying after all, Doc!

I think it says "favicons", Snay, which I am assuming means favourite emoticons, but I don't really know as I stole it off the internet.

I was going to say something about anthrax, but you beat me to it in your tags. Oh, but maybe it's an Anthrax album? Won't that be fun?

I hope they're not real geese. That would bring Peta down on your ass. Do you know anyone who recently went to Cuba???

I wish someone would mail me strange parcels every year. That's awesome.

You might want to call the courier and get them to check to see if it's still there (the c.o.d. might just be a duty charge) and get them to redeliver. Please please take pics if you get it.

It may be Gwyneth's head again. Pay for it.

Very mysterious Barbara... I am certain you have your suspicions as to its origins but part of you must just want to keep it a secret. A little bit of Christmas magic if you will.

You have to take pictures if the mysterio-Cuban package comes back though and share it with your adoring audience.

Be sure to give it a good sniff before you open it though!

I think the whole thing is going to make you nuts until you pay the $10. A ten spot is worth maintaining your sanity.

(My word verification is doglused. Will have to think of a good definition for that one.)

Or maybe it's an Anthrax eight track, Beckeye. Or a whole box of eight tracks! That would be awesome and it would make me one of the cool ironic retro-embracing kids.

As a matter of fact, I DO know someone who went to Cuba recently, now that you mention it, Karen. Thankfully it's not someone who would ship live geese in a box. Must investigate further.

Poor Gwyneth, she's never gonna be able to rest her head, John! Oh I crack myself up!

And you guys even have that handy dandy fifth amendment that you can toss around as required, Dr M. I've always been envious of that.

It really is rather magical, this sense of Christmas mystery, Sean, but although I really a couple of suspicions, I really am still very much in the dark as to who the gifter is.
If it was coming from Jamaica instead of Cuba, you can bet I would be giving it a good sniff!

I'm starting to hope it comes back again now, Charlie. As Karen said, it might just be duty charges, which seems less cheesy somehow.

I think the C.O.D.ness might be a result of some shipping misunderstanding, Moxie, or maybe it isn't the mystery Christmas bird after all, and just some sort of new Cuban mail scam, set up to get a whole $10.00CAD off me.

I too thought of that certain member of the Marthas when I read Karen's comment, Eliz. Or perhaps it's a different Martha who is simply trying to deflect attention from herself...
*stares suspiciously at you*

Oh I'd totally pay. I'd have to know. That is a very cool "tradition" thing y'all have there.

It is pretty cool, innit, Justrun? I hope they bring that parcel back, now that we have likely figured out what it is.