oh tidings of butter and joy

The most sacred ritual of the high holy days was performed at the Zombie household yesterday - that of The Baking of the Subversive Shortbread. 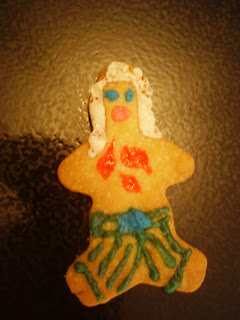 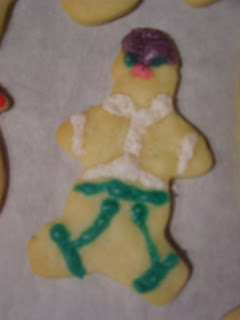 Danny Devito was there too, reprising his role in It's Always Sunny in Philadelphia: 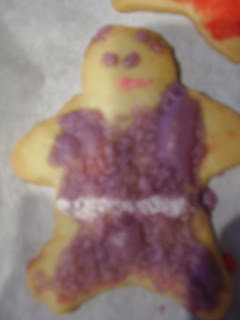 The day was not without its tense moments. Such as the emergency surgery that had to be performed on Thom Yorke, to extricate his head from the trap that the previously untested Gel icing tube inflicted upon him: 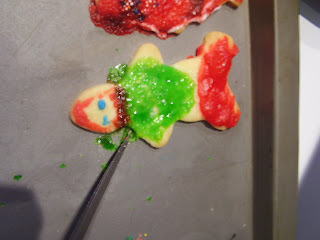 I was sure we were going to lose Thom, but the Resident Offspring's steady hand and first responder training paid off and our favourite little elf was eventually freed and airlifted to safety: 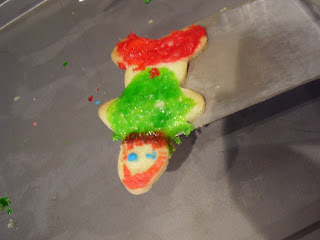 Where he spent a considerable amount of time in recovery: 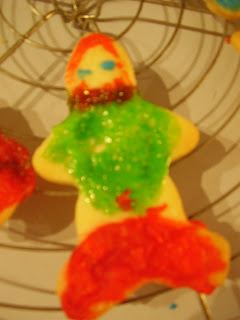 But alas, our attempts to save Lady Gaga were in vain. Not even the eye patch could reverse the devastating effects of the inadvertent Jayne Mansfield re-enactment. (spoiler - we rebuilt her because we have the technology): 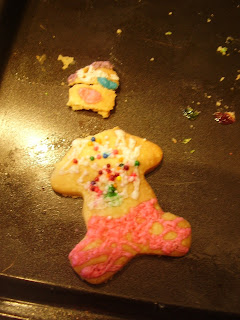 The celebrity lineup, clockwise from top left - Jim the mass vaccination clinic ninja who choreographed the photoshoot, Jim Reid rocking the JAMC hair, Iggy Pop who once again forgot to pack a shirt, an anatomically correct Dr. Manhattan, Danny Devito complete with body modification, Lady Gaga 2.0 this time sporting sunglasses which are much safer for driving than that eye patch, and Thom Yorke fully recovered with his beard looking only a trifle more grizzled: 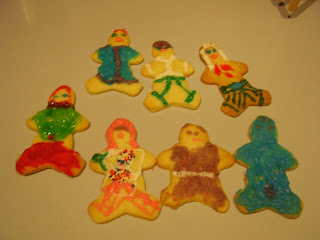 And oh yes, there certainly were zombies: 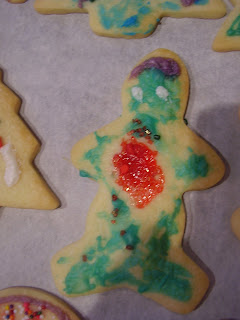 For a glance at some Subversive Shortbread creations from previous years, please check out the music-centric efforts from 2008 which includes the entire Radiohead lineup and Colin Meloy's naughty bits, and the inaugural event in 2006 which caught the attention of the Scottish folk singer, Momus.
Posted by Barbara Bruederlin at 4:47 pm

Have a wonderful holiday, Zombies. :)

it must be the thin air at Calgary's elevation...

Thanks, Justrun, it's a little holiday tradition that seems to have taken on a life of its own around here.
The Zombies wish you a wonderful holiday as well!

I think that could probably go a long way toward explaining a lot of things, Kelly.

speaking of zombies, I'm sure you're way ahead of me but...have you watched "Dead Snow" yet?

I haven't, but I really really want to! Have you seen it, Kelly?

I just shed a tear. And a sweater, but that's unrelated.

Love the celebrity cookies. And I bet they are mighty tasty too.

But doesn't anthropomorphising them make them a little hard to eat? I mean just where does one start when dining on Thom Yorke let alone Dr. Manhatten?

What a great tradition though, I'll have to share this with my own little offspring. He will love this idea!

Well done on Iggy too. But those red things... Are those, um nipples?

Merry Christmas Zombies from me and Tuffy P and the menagerie.

AWESOMEEEEEEEEEE!!!!!!!!!! I couldnt even get Ayla to make a gingerbread house this year...or bake brownis....ARGGGG!!!!!

Is it really unrelated though, John? I think there may be something you aren't telling us.

They ARE tasty, Moxie! Who hasn't wanted to bite Danny Devito's head off?

Sean, I have to admit there is a moment of hesitation when one first picks up Dr Manhatten, for example. It is hard to look him in the eye prior to chomping down on him, but then again, you certainly don't want to look elsewhere. But after you've eaten a few celebrities, it gets disturbingly easy.
I would encourage you to press your own offspring into subversive cookie making. I have a feeling he would come up with some tuly unique creations.
Oh, and they aren't nipples! It's blood! From an encounter with a broken beer bottle.

Good thing I didn't make any Jesus cookies then, Dr M. That would have really given him something to cry about.

Thanks, Mr Anchovy! Merry Christmas to you and Tuffy P and all the cats and dogs as well!

Maybe she's planning to sneak out to the bakery and pass some amazing creation off as homemade, Jen. Which would be pretty great too. It all goes in the tumeh!

It's my favourite time of year! I think you both outdid yourself this year. I love Thom and his red pants, so glad he was able to be rescued. And Lady Gaga made me laugh. :) I'm hungry for some shortbread now.

Thom has worn those same red pants two years in a row now, Al, they have become a cultural phenomenon in themselves. And I did see a recent photo of him at the Copenhagen summit wearing The Pants, so obviously they are still in his wardrobe.
And thank goodness for Lady Gaga! We need someone like her!
Merry Christmas to you and your family and Boy as well!

A new Zombie avatar! And since you're the Zombie family, you shouldn't feel at all weird about eating cookie people.

Is there anything better than buttery buttery joy? I dunno. Happy Holidays to my favourite Zombie!

Not even the ones that are partially disembowelled, Charlie. Icing blood is pretty tasty, as it turns out.

Dale! How lovely to see your adorable typing again! Buttery Christmas to you too!