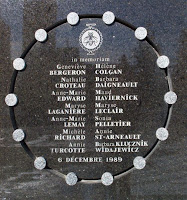 I remember exactly where I was when I heard. Something like that burns itself into your memory forever.
That day, twenty years ago, when a gunman entered École Polytechnique in Montreal, determined to murder feminists, I had just started my new career, a career in which I would eventually work for thirteen years. I heard the news just as I was leaving to catch my bus home on that snowy December evening, the news that fourteen female engineering students had been massacred. It was a mild night, but I will always remember the intense chill that I felt, a chill that burrowed deep into my soul, as I waited to transfer buses in front of store windows incongruously decked in festive holiday sparkles.
I too had studied in a traditionally male dominated field. I had fielded my share of sexism while in university, but I had also seen women finally become professors in my department, something which had been unheard of a few years earlier. That December night, as snow muffled the traffic of the downtown streets, much as gunfire had silenced fourteen voices, all the triumphs, personal and political, seemed shattered. And I wondered how we would ever drag ourselves out of the abyss.
I wonder now what those women might have become.
Posted by Barbara Bruederlin at 7:16 pm

I don't remember where I was when it happened, as I just turned 2 years old at the time. However, I'm now a student at that school and on the few occasions that I've walked pass the commemorative plaque, it felt weird, it felt lie it shouldn't be there, it should not have happened. In the past few days, hearing the coverage on the news, it's been weird walking in the building where it happened, and I know that some of my friends feel the same way.
There's a pretty good article in today's Montreal Gazette where the author asks what those 14 women could have become.

I remember being in the newsroom having a discussion with a fellow journo on whether it should be taken as a women's issue - she said no, I said how could it not - he divided them from the men, called them feminists and killed them. And now they are killing the gun registry.

nothing changes i guess

I didn't realize that's where you are now going to school, Evelyne. The atmosphere around campus must have been especially reflective and sombre. You must have felt the ghosts.

Sadly, very little does, Gifted.
I think the gun registry was badly mishandled, but that it is a huge mistake to simply scrap it. All for nought.

There were a few good articles in the Montreal Gazette, as Evelyne mentioned, which I found touching. I am sadden by the handling of the gun registry, and even more so the plan to get rid of it completely.

Definitely one of the darkest days in Canadian history.

The atmosphere on campus was somewhat reflective during the last few days, but at the same time, it's the exam period and end of semester general craziness with papers to write and presentations to do. And as this year December 6th was a Sunday it might have been different than previous years (classes are cancelled on that date when it's a weekday)

The government seems to have washed its hands of the entire concept of gun registry, Al, which seems so wasteful and to indicate that they don't take this issue seriously.

A very dark day, John, and yet I don't know if we have learned anything from it.

Falling on a Sunday would no doubt have made quite a difference in the atmosphere, Evelyne. I'm glad that classes are normally cancelled on that day. We can't afford to forget this happened.