sex in the ice cubes 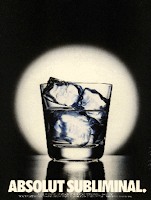 Remember back in the 70s how the notion of subliminal advertising was all the rage? I'm sure I wasn't the only kid who spent hours pouring over Smirnoff ads in magazines, looking for couples in flagrante delicto depicted in the glass of vodka over ice.
Yeah well, that's all a myth, according to Terry O'Reilly. The ad man and host of the insanely intriguing Age of Persuasion on CBC Radio burst our bubbles when he was asked about that concept at the Plaza Theatre on Sunday. According to O'Reilly, the advertising business is fueled by panic-driven deadlines and nobody has the time to dream up sexy little subliminal images to inject into the ads they produce.
Which is a shame, but the near-full house at the Plaza was certainly not disappointed by anything else he had to say. Focusing primarily on three chapters from his and Mike Tennant's new book The Age of Persuasion: How Marketing Ate Our Culture, O'Reilly kept us mesmerized, as we munched our box lunches, by just how vulnerable we really are to the power of clever advertising.
The power of advertising really lies primarily in how it has insinuated itself into our psyches. Ads have become so ubiquitous, appearing on everything from the space station to condoms, that they are in danger of becoming invisible in the clutter. As O'Reilly puts it, advertising is the only industry which simultaneously creates the problem as it tries to solve it.
Touching on everything from the ability of smell to bypass the thought process entirely and go directly for the limbic system, to the power of the word to rebrand a company and manufacture loyalty, right through to the unwritten contract that an advertiser must fulfill to provide something in exchange for our time, Terry O'Reilly demonstrated to a rapt audience just why The Age of Persuasion (the show about advertising on our national ad-free radio station) is such an enormous hit.
O'Reilly's reading was cleverly paired with one by Gordon Laird, a local investigative reporter, reading from his treatise The Price of a Bargain: The Quest for Cheap and the Death of Globalization. Laird presented his premise that pervasive price cutting, demonstrated most profoundly in the big box phenomenon of Walmart, and the endless sprouting of local dollar stores, is the most powerful economic force at work in today's marketplace. Flanked by the visual presentation of big box communities and freight container cities in the port of Los Angeles, along with images of social upheaval in China, Laird made a compelling argument against the dangers of the quest for ever cheaper goods, even tying in the example of what is perhaps the most disturbing quest for cheap on the planet - the squandering of high quality natural gas to extract low quality bitumen from the Alberta Tar Sands.
With our economy hopelessly dependent upon cheap transportation, cheap labour, out of control consumer credit, and dwindling resources, Laird's convincing argument that this reality is unsustainable hit awfully close to home. Yet he was surprisingly funny for someone tackling such disturbing questions.
My only complaint with the event was the unfathomably large number of toddlers in attendance. I have nothing against children; they are delicious. But I have no idea why so many parents thought that a two hour lecture series about advertising and economics would be a good place to bring a two-year old. No wonder they squawked all the time. It wasn't a Robert Munsch reading, people!
Restless toddlers aside, attending these readings was a great way to spend a Sunday lunch in Kensington. Kudos to Pages Books and their next-door neighbour, the Plaza Theatre, for marrying their resources to open this event to a larger audience than could be housed at the tiny book store. I, for one, was certainly cheered to hear that this was the first in a planned series of readings, to be held the first Sunday of the month throughout the winter.
Based on this inaugural event, the series should be a huge success. You really should go.
Posted by Barbara Bruederlin at 9:25 am

There's a children's entertainer from Newfoundland called Terry Reilly-- could some of the parents have confused the two?

That sounds like it would have been really fun to attend - minus the yappy kids.

In Toronto ads are everywhere, so it's hard to notice them all - but I try to keep an eye out for interesting ones - but it really is hard, because the more ads there are, the harder it is to get any one message across.

i would have really liked that presentation

I'm sure I notice more ads than I think I do, why else would they all be out there? But, when I'm not watching something I pre-recorded and thus fast forwarding through commercials I am generally oblivious to them...I think, maybe

I would have really enjoyed both presentations as well.

That is the only possible explanation, John.

That's exactly the premise that O'Reilly put forth too, Todd. It's a conundrum which the advertising industry can only make worse as they try to fix it. He also encourages us not to buy from company's with annoying ads. I can buy that.

You think you are oblivious to them, Kelly, but the whole time you are falling victim to those images in the ice cubes! Buy me that iphone!

They were very compelling, Mr Anchovy. A perfect blend of entertainment and enlightenmnent.

must be why i have this thing for ice cubes

But, but, but I saw a film in college about subliminal advertising and it wasn't just vodka ads but popcorn ads at the cinema... surely it must have been done, I saw the film, I tell you, I saw it, I did..I did.....I did.....

Ah, I miss lectures. Sounds like a brilliant way to spend a Sunday morning.

I do enjoy my local "dollar" store though, it's run more of like a ma and pa hardware store, as it's not a chain. I'd rather give my money there then to a box hardware shop, or Futureshop when I need a piece of cable or something.

Sounds like a great lecture, but yeah, why would you bring little kids to it?

That sounds like an interesting lecture. I've seen parents bring toddlers to similar events, and have always been wondering what the kids were doing there.

Still looking for the naughty bits in every ice cube, Kelly?

Those popcorn ads were back in the early days of cinema, as I recall, Leazwell. They had way more time on their hands for such shenanigans back then.

Mom and Pop stores are great,Al. It's one thing I really miss about London, that little store on almost every corner. Now I have to walk at least 20 minutes to get to one. To a huge chain nonetheless.

It really boggles the mind, Wandering Coyote. What could they possibly glean from it?

Next time I am going to ask them, Evelyne.