Scorched by sand, shaped by secrets 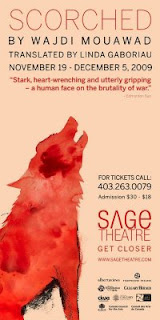 It's no secret that Sage Theatre's stock in trade is the unconventional, the shocking, the difficult plays that leave you pondering painful questions in the middle of the night. The current production of Wajdi Mouawad's Scorched remains true to that time-honoured tradition. It is a powerful play of pain and stark discovery, that returns to haunt one during those midnight reflections.
Following the death of their mother, Nawal - a woman who had not spoken a word for five years until shortly before her death - twins Janine and Simon are stunned during the reading of her will by what is bequeathed and requested of them, a denim jacket marked with the number 72 to Janine, along with a letter to be delivered to the father they believed long dead, and a red notebook to Simon, along with a letter to be delivered to the brother they never knew existed. Only once these requests have been fulfilled, they are told, can the silence be broken and can their mother's grave be marked.
The odyssey upon which the twins reluctantly embark leads them from their home in Montreal to the war-scarred territories of their mother's Middle Eastern homeland. The stark setting of the play - a rough wooden platform draped in canvas rags, a large boulder, and endless sand through which you must trudge to reach your seat - imparts such a sense of place upon the theatre that you swear you can see the machine-gun riddled bus, the notorious prison, the impoverished orphanage, although they are actually only referred to in dialogue.
Scorched unfolds in a shifting reality of time and place. Quite often scenes will overlap in both time and place, with flashbacks to Nawal as a teenager or a revolutionary occurring simultaneously with scenes of her daughter's quest to discover the truth of her being. It's a technique that is highly effective for illuminating both the vast differences between Nawal's reality and the way she was perceived by her children, and the manner in which that harsh reality is an integral part of her children's existence.
There is something very lyrical in the play's language, a poetry that is only fitting as a backdrop to the story of a woman who fought hard to fulfill her grandmother's dying wishes that she learn to read, to count, to speak. The poetry of her language is what ultimately shapes the life that Nawal lives. It shapes her passions, informs her understanding of the futility of the war in which brother kills brother, ensures her survival, and in the end determines her children's very being.
We have all heard the news stories of the conflicts that have ravaged this part of the world, but the news feeds always drape the stories in a cloak of anonymity. Sage Theatre's production of Scorched manages to intimately connect us with the humanity of the people caught in these horrific wars, as they struggle to retain their dignity and dreams in the face of indiscriminate slaughter.
There are some disturbing and ugly truths that are finally revealed in Scorched. I heard distinct gasps from the audience on a couple of occasions. The love that Nawal retains through unspeakable horror, a conflicted love that causes her to fall silent for five years before uttering her final words "now that we're together, everything feels better", is a testament to the resilience of the human spirit and to heartbreaking hopefulness in the face of darkness. It is that hopefulness, and the acceptance that accompanies it, which lifts Scorched out of the depths of nightmare and into the realm of dreams.
Scorched plays at Sage Theatre, Nov 19 - Dec 5, 2009
Posted by Barbara Bruederlin at 3:14 pm

Whenever I read your Sage reviews it reminds me I need to get out to more plays. Or makes me wish that the Sage Theatre was here in my city. Great review!

"Sage Theatre's production of Scorched manages to intimately connect us with the humanity of the people caught in these horrific wars ..."

Thank you, Barbara, for that line. We worry about our troops during wartime, which is only right, but we seldom hear about the hardships and deaths of the innocent civilians caught in the middle.

That is one of the reasons I loved The Book Thief so much.

That was a good read, yo. I am still very much a play virgin, but every one of your Sage reviews definitely reminds me that I be needings to go to a few of these play things soon.
Also my word verification is "chingle".

Why thank you, Kathy.

It really is worth it to take in the odd play, Al. It's even better when you get season's tickets for a theatre company that you really enjoy.

The civilians do seem so often forgotten, Charlie. The news reports don't usually delve into the daily lives of the people who live amongst the conflicts day after day.
Now I must find out more about The Book Thief.

I would encourage you to go to whatever plays you can, BAP. There's nothing like live theatre. Well, except for live music.