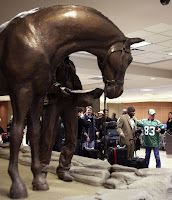 I knew that the Spousal Unit was planning to pick me up at the airport today, but I really expected it to be much more low key than this.
I stepped off the escalator and toward the doors of the meet and greet area, expecting to see the usual handful of people on the other side waiting to greet arrivals. Instead, as the doors slid open, I was greeted by a bank of ten to twelve television cameras. For a second I had to scan my memory to recall if I had slept with any celebrities lately.
It wasn't until a couple of seconds later that I noticed the marching band in the crush of bodies surrounding the arrivals door. Although I am not sure how I missed those red and gold brocaded uniforms with the big majorette hats, at least fifty strong, with drums and trombones and a couple dozen flags. Jet lag perhaps. And it wasn't until I noticed that a flight from Regina had arrived at the same time as my flight from Vancouver that I remembered that the Grey Cup is being played in Calgary this weekend.
Once the Bishop Grandin Marching Ghosts had finished feting the arriving Grey Cup players, and after that handful of 300 pounders had all been white-hatted in the traditional style of this city, the airport returned to normal.
Just another day in the city that loves a parade.
See anything unusual in your travels today?
Posted by Barbara Bruederlin at 8:04 pm

"For a second I had to scan my memory to recall if I had slept with any celebrities lately." Ha ha ha!

I can imagine just a marching band alone would have created a bit of chaos at the airport (it's the hats that always get me) add football players in the mix...glad you made it out. ;)

Anything unusual in my travels today? Well yes, dry pavement. Haven't seen that in months.

At some point in my life, I hope I get to use the line "For a second I had to scan my memory to recall if I had slept with any celebrities lately." I really and truly do.

That dry pavement must have freaked you out a little, Al. Did you have to google it?
The combo of high school marching band and linebackers in suits was sort of surreal, especially when it all took place in front of the luggage carrousel.

I hope you get that opportunity very soon, Justrun. Use it well and use it with pride!

i've never been white hatted when I landed there. And I'm sure there won't be in a couple weeks when I land there again.

You should have whipped out your oversized dark sunglasses and made a big scene, shouting something incoherent about the "damned paparazzi".

I once saw an all accordion marching band. wow.

Do you want me to come out to the airport and white hat you, Kelly? Actually I don't think I have the authority to do that, but I can sure meet you for coffee if you have time while you are here.

Argh! You are so right, Karen! Missed opportunity! Mind you, I did not even bring my sunglasses to Vancouver with me, as that would have been entirely pointless.

That must have been an incredibly surreal sight (and sound), Mr Anchovy.

Rats. Maybe the marching band will be for you next time.

I used to travel a lot for my earlier-life job, and there was always a marching band for me at the departure gate.

Is "the airport" (any airport really) just the most surreal place on earth? All the security, flashing lights, unusual architecture and moving sidewalks. Intimidating at the best of times I can't imagine adding a parade and beefy linebackers to the mix. Just thank God they ixnayed the clowns; that might have just put you over the edge.

Anything unusual in my travels today? The guy leaving Starbucks with a coffee on his roof. I really, really felt for him...

At the departure as opposed to the arrivals gate, Charlie? Well that is very telling, isn't it?

You must have been simultaneously cringing and laughing your head off at the Roofbucks coffee, Sean. That would indeed have been a bittersweet sight.
Far superior to having clowns show up to greet one at the airport though!

We should have bought cookies from the Marching Ghosts last year. I love that name.

that would be cool, however my time in Calgary consists of a couple hours at the airport between flights....hardly white hat worthy

That's a shame, Kelly. One day you must stay a bit longer so we can visit.