Matthew Good: us does not remain impossible 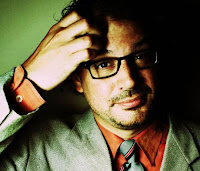 Sunday night's concert certainly proved that. After a few years of touring solo and playing dark acoustic shows, Matthew Good had no problems packing the house (and necessitating a second concert on Wednesday) with his return to his rock roots.

Vancouver power pop group Mother Mother opened the night with a polished and choreographed set. They were given a mixed reception. Most people clapped politely, but there were evidently some hardcore fans in the crowd too. It's not often you see people (albeit less than a handful) dancing in the aisles at Jack Singer. It's just not that sort of venue.

I wasn't sold on them musically, though. They were energetic enough and I am sure they are very nice people, but I found them to be almost annoying, melodically speaking. They've got the looks, they've got the clothes, but I think if you are going to go the power pop New Pornographers route, you have got to have the catchy hooks. It's imperative.

But of course, everyone was there to see Canada's premier rocker curmudgeon, Matthew Good, and he certainly did not disappoint, either musically or curmudgeonally. It's no wonder that he has such a long-standing reputation for being confrontational. It's partly because he is highly opinionated, with the brains and the passion to back up those opinions, and partly because the audiences at his concerts are filled with an inordinately high proportion of drunken yobs.

Fortunately, Matt Good can always be relied upon to put disruptive jerks in their place with his trademark stinging sarcasm that the rest of us find hilarious and highly satisfying. There were a few moments like that: the pointed look in the general direction of the offender, the pause, and then the zinger. Matthew Good has great timing and he does not tolerate fools.
Surprisingly there were no political rants. He did not once mention the Olympics nor any member of government. I guess even Matt Good has to take a night off from being the bulldog of the nation. And he certainly did seem relaxed, right down to the Pink Floyd tee shirt he was sporting.
But rants and wardrobe aside, Matt Good played a solid 90 minute set (plus 20 minute encore), heavily populated with songs from his newest album, Vancouver. It's a tribute to the drunks behind us that they knew all the words to the new songs, even though they shouted them instead of singing them like a normal person would. In amongst the new songs, Matt dipped back into Hospital Music, Avalanche, Beautiful Midnight, and even Underdogs for the rest of the set.
He obviously enjoyed playing with a band again. They sounded solid, like a band that has been together for a while, and there was a considerable amount of joie de vivre on-stage. It's not often you see the bassist leave the stage mid performance to go to the bathroom. And I doubt that in the old days of the Matthew Good Band, it would have been the occasion for good-natured jesting that it was on Sunday night.
We were particularly impressed with the young guitarist, and not just because he had perfected his awesome guitar hero stances either. He really could flail on that thing. More than once, his riffs launched a spontaneous outburst of applause.
It was great to witness Mr Good delivering an all out rock performance, complete with a stunning light show, again. That Pink Floyd tee shirt turned out to be appropriate after all. This was the fifth time that I have seen Matthew Good perform, yet only the second time with a band. Matthew Good the solo performer and Matthew Good the band frontman can coexist quite seamlessly, I think. He still has the powerful voice and he still has the presence; those will remain constant, regardless of how many people are on that stage.
Posted by Barbara Bruederlin at 3:02 pm

Reviews like yours make me realize I need to get more live music into my life again.

I saw Matthew Good with his band when we were both much younger and stupider. I think we'd get each other much more now.

:)
I still remember the time when I went with you to see him! It was great experience for me to see him perform!
I am glad that you enjoyed his show again, wish I was there too!

You really do, Justrun. Live music makes it all worthwhile.

He's still got the fire, John, but it's tempered by maturity. I think you would get along much better now.

I wish you could have been there too, Jas. That was such fun the time we went together. And the last time I had seen him with a band.

Great review Barb, your writing transported me to the concert momentarily.

I've never seen Matthew Good live before, which is a tad inexcusable seeing as I live in Vancouver. When I first moved to B.C. in the late 90's his music was played constantly on the radio, and "Hello Time Bomb" provided a form of catharsis for me many times while stuck in traffic.

Tell me again why you're not a professional and highly paid music critic?

In a couple of days we will actually be transported to a concert together, Westcoast Walker! I am pretty excited about that!
Hello Time Bomb would make for a very cathartic traffic jam song indeed, provided one was not driving home from their job at Radio Shack. Because that would just hit too close to home.

Because not everyone is as sweet and kind as you, D? Or perhaps because everybody wants that gig. Thanks, though!

What the hell is power pop? I have never heard that term before!

Great review! I almost want to go and see him myself!

You're not interested in seeing a Finnish power metal band playing Calgary in April, by any chance?

Power pop essentially refers to music with strong melodies and use of harmony, Wandering Coyote, which is guess is a pretty broad definition, but I generally think that slightly larger bands with a mix of boys and girls do it particularly well, as it allows for great harmonic possibilities. But that's my own personal bent.

I seriously doubt that I could handle an entire concert of Finnish power metal. One or two songs would be my limit. Are you going to be in town?

Yeah, Sonata Arctica is playing in Calgary in April. I really want to go, but I may end up going on my own.

yes @ the mother mother jive...very much the case...something about them to me was weird haha

u know MG was not ranting at all in Vic either....no political statements whatsoever...i was a little sad by that...i miss the anne coulter doll days hahaha

If you do come to Calgary, Wandering Coyote, I would LOVE to meet with you! But will back out of going to the concert...

The Anne Coulter doll! I miss those days too, Jen. But I guess even Matt got to have some time off.

11-22-09. Good songwriter, but wouldn't watch live show ever again. No crowd interaction, mentioned he was 'just killing time' half way through the show and sure enough, finished show right at 1.5 hours, probably due to contract obligation. No goodnight or thanks for coming out and left the stage. Definately money poorly spent....