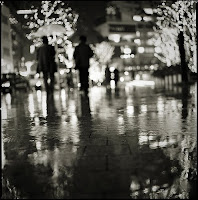 This Vancouver trip feels like it is speeding by at a breakneck pace, yet it has been so packed with events and activities and fabulous people that it's also hard to believe that I have only been here since Friday afternoon.
Since we last spoke, I spent five hours wandering around downtown in the rain with the Offspring Formerly Known as Resident, getting seizures from the excesses in Pacific Centre mall, learning how to do the umbrella-passers' greeting on the rain-soaked streets (one up/one down), getting shushed by book browsers in Chapters.
At least one of us was thoroughly chilled, weary and starving by the time we met Allison, Mel and Matthew in front of the pub on Granville and Robson, but a steaming bowl of Irish stew and a refreshing ale soon made that grumpy shopper fit company once again, and the rest of the night was golden. It seemed a little surreal to be sharing food and drink and entertainment with not one, not two, but three fabulous blog friends. It sure felt right.
The Commodore Ballroom is a a gorgeous venue, boasting elegant woodwork, a sweeping staircase, killer arch windows overlooking downtown Vancouver, with booth and tables and three bars. We managed to grab a table on the second level, nicely cozy to the stage with a perfectly unobstructed view.
Details of the Billy Bragg concert itself deserve more space than I can afford here, and will be forthcoming in the next couple of days. But it was a great night, spent with great friends.
After getting to sleep at an hour when one is more likely to be getting up for a middle of the night tinkle, both the OFKAR and I found that morning arrived brutally early.
But there was shopping to be done. In Burnaby, nonetheless. And there was Allison's museum to be toured even further afield from the rain-soaked streets of Vancouver. Suffice it to say that we set a new gold standard for targetted shopping, amassing an unprecedented amount of wardrobery in 1.5 hours.
The Maple Ridge Community Museum was a bit of a gem, I thought. The Haney house is a donated family home, quite beautifully appointed, on a lovely little spit of land, while the main museum building itself boats the most astounding and complete miniature train display you will ever see.
And the evening spent with Al in her lovely cozy little flat, munching on hearty black bean and corn quesadillas and homemade apple crisp while gossiping about the rest of you, felt so natural and comfortable, like we do that sort of thing every weekend, that it was hard to believe that we would soon giving each other a goodbye hug, which would have to tide us over for several months.
Tomorrow will be an even earlier morning, since my angel child is taking herself to morning classes. We'll be spending the rest of the day poking around some shops and sharing a meal or two before I will reluctantly return her to the clutches of the ivory tower.
But I will return.
Posted by Barbara Bruederlin at 10:37 pm

Email ThisBlogThis!Share to TwitterShare to FacebookShare to Pinterest
Labels: the great Vancouver mini-break, we didn't really talk smack about you

Billy Bragg and a blog friend meet up? I am so jealous.

It would have been infinitely better had you been able to join us, Dr M.

It all sounds so amazing, Barbara. I love the use of language in this post - you are such an amazing writer. Your experiences are leaping right off the page...

I don't know why I just got this amazing picture in my head of the Commodore Ballroom being like a Chuck E. Cheese, with animatronic figures of The Commodores playing one of their hits every 20 minutes or so.

I'm so glad to have been able to see you over an extended period of time, and it feels longer than my last visit to Calgary. I'm even happier that you managed to make it out to the Ridge and visit the museum(s) and share a meal at my flat. Even if you had to eat in from the chesterfield. :)

I hope you enjoy the rest of your stay in Van with the OFKAR (did I get that acronym right?) I'm rubbish at them. Anyway, cheers and happy Monday!

Hi Barb - I am honoured to be one of your fabulous blog friends (aka number #17 on your blog meet-up chart!).

It was a great night with fab music and wonderful company - the warm stew and the 80's roller skating soundtrack cetainly set the tone at the beginning.

Glad your trip has been great and that you could spend time in the rainforest with your wonderful offspring. Hope to see you again at some point when you grace Vancouver with your presence once again.

Awww shucks, Wandering Coyote. This is me scuffing my toe in the dirt.

You are exactly right, Beckeye! You've been here before haven't you?
The California Raisins were there too.

Not so rubbish, Al, you got that acronym exactly right.
Your museum is great, you should be very proud of what you have accomplished there so far. And the chesterfield is the perfect place for quesadillas, as far as I am concerned.

It was the "beysti" trip to the wet coast that I have ever had, Matthew. I am so glad we got to meet and share a great evening. I will be back and you can bet I will track you down!