invite the tabby two doors down 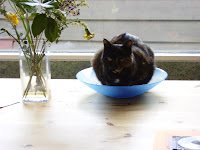 The resident cat has been most attentive in helping me prepare for our dinner party tonight.

Since I met our guests through BLIP, I can safely assume that music will feature large in the course of the conversation, which begs the question, what should be on the playlist for the evening? What goes with lasagna anyway?

I'm sure the cat will have an opinion on that too.

Posted by Barbara Bruederlin at 2:29 pm

Email ThisBlogThis!Share to TwitterShare to FacebookShare to Pinterest
Labels: do I need to start a new belt or add my BLIP friends on my blogger meetup belt?, fulfilling my NaBloPoMo committments during a time crunch

Josh Groban, of course, but he has a tendency to put everyone (and everything) to sleep within 15 seconds.

Blip? me be confused

dinner party music hmmm....I would tend to put something background-ish that isn't overbearing....and I am totally clueless about new music so I'm thinking my opinion would make you roll your eyes

Have you seen the movie Cadillac Records...I really enjoyed the music in that one

I haven't seen Cadillac Records, Kelly. It's Motown isn't it? That would have been good too.

I'm clueless on these things. I put the ipod on shuffle no matter the occasion. Aerosmith goes surprisingly well at a baby shower, FYI.

But with a cat on a platter, no one's going to notice the music. :)

Alas, I am disappointed in you, dear Zombie. Cadillac Records is about Chess records and the early Chicago blues sound. For that, you could break out the Muddy Waters, Little Walter, Howlin' Wolf, Etta James, Chuck Berry and so many others.

It would almost feel like a night at the late great King Eddie.

Music is always a tough call. While one would want to geek out over really cool stuff, that kind of gets in the way of socializing. Right now, I'd probably play one of the soul collections by the Numero Group. Interesting, fun and unusual but can be played through so you don't go rushing back to the stero too often. They're a great label.

Oops. Soul or foot pounding blues would probably not be best for a dinner party. I just reread that part.

I'm kind of at a loss. I'd probably pull out some Van Morrison or something Scottish like Belle and Sebastian or Camera Obscura. Maybe Nina Simone doing 60's covers (her Mr. Bojangles kills me) or Billie Holiday.

I love that picture! Glad you had nice evening. Any leftovers send them this way. ;)

just listened to nina simone's mr. bojangles....it is quite wonderful

You will be relieved to know that I removed the cat prior to serving dinner, Justrun.
It's surprising what works at a baby shower, babies being very nonjudgemental.

I stand corrected on Cadillac Records, Remi, and am suitably ashamed of myself.
I did play a bit of Belle and Sebastian last night too, I think, and anytime is a good time for them. But next time I have a dinner party I think I will simply invite you and ask you to chose the music.

I would send the leftovers along, Al,but I would be afraid that by the time Canada Post got through with things, the spinach in the lasagna would not be the only green part of it. And that's less than desirable. Better you should just come here and I will make it for you again.

I need to find that, Kelly!

Music will be a critical factor in your meal time planning my dear Barbara... Frankly I like to leave it up to the genius of the iPod shuffle mode when I am entertaining. Hoping of course my Lionel Richie Greatest Hits boxed set doesn't pop up in the mix too often.

I am always amazed at the serendipitous ways of the iPod though and how it frequently makes such dinner parties hugely successful.

blip buddies? Wow, you are bringing the cybersphere home aren't you

My laptop (sadly I do not have an ipod) has this habit of playing songs that I have never heard before in my life, Sean, which can be pretty great or pretty awful. Lionel Ritchie has remained silent thus far though.

I have more of a problem with some songs being REALLY LOUD while others are very quiet. And it's never the ones that you want loud which end up loud.

You can tell a lot about people from their musical choices, Gifted, which is how I knew they weren't ax murderers.