even the thirteenth man 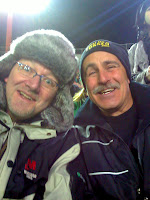 Here is some of the only remaining proof that the lads from Casa Zombie (L to R, the Spousal Unit and the Big Brother) were actually in attendance at the 97th Grey Cup Game on Sunday. Somehow all the photos in the cameraphone 5000 got wiped out of existence while being shifted to another folder.
.
Despite the lack of official documentation and despite the fact that all the vendors at the stadium ran out of food before halftime, leaving some betouqued and Russian tank commander headgear-sporting individuals hungry enough to gnaw off their own arms by the time they got home, the event was evidently one for the record books. The weather was fair, fellow fans on both 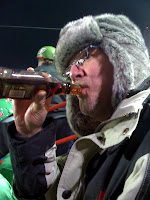 sides were jovial, the liquid refreshments flowed, and gate security didn't notice a certain furry-hatted fellow carrying his rum bottle right out in the open after he encountered an issue with tucking said bottle into the planned groinal area smuggling spot.
.
Some of the revellers even made the pilgrimage to IKEA the following day to worship at the foot of the lingonberry and the meatball. Impressive stamina.
Posted by Barbara Bruederlin at 8:41 pm

Email ThisBlogThis!Share to TwitterShare to FacebookShare to Pinterest
Labels: and this fulfills my NaBloPoMo committment, let the Grey Cup debauchery begin

Never watched a game, couldn't even tell you all the teams. But still happy for all those that enjoy it.

There was a time when I would rally for Ikea; thankfully now it is a mere 15 min away from my house.

I am very impressed with both family members, glad they avoided lock up!

Looks like they had a good time! Is the hat mandatory? Just wondering what I should expect to wear next year.

Glad to see that BB was still in possession of his hat and not wearing the field...lol
Never saw BB turn down a meal yet!

Not just any old footy, either, Dr M - Canadian footy!

I couldn't tell a third down from a hail mary, John, but I love Grey Cup chili!

Hey we must be IKEA twins, Missy, mine's about 15 minutes away too!
The family members were actually very well behaved. There were actually only 34 arrests, and none of them were related to me.

I would suspect that Edmonton in late November would be a good place for a hat, Karen. Dress warmly, you can always remove layers. And don't be tempted to strip and run across the field.

Grey Cup 97 was apparently a considerably different experience for Metabolism Boy than was Grey Cup 79, you will be relieved to know, Kathy. No rides in police cars.

Whenever Saskatchewan fans are involved, crazy is the optimum word, Justrun.

Whisky straight from the bottle! You Zombies know how to party. If I ever take a liking to Football, I know where to come for the party. :)

Sounds like you had a great visit with your brother. Glad the arrows in IKEA didn't keep you away from the main attraction - the food. I'm craving a cheap cinnamon bun now.

You know me too well, Al. We purposefully went against the arrows at times, with them at others, just to keep those Swedes confused. We did refrain from using the showroom toilets, however, so we are not as bad-ass as we would like to imagine we are.