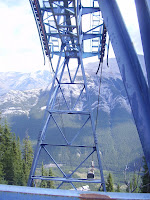 Here in the foothills, winter has been flirting with us for the past week. This afternoon it got aggressive, and decided that enough is enough, either we put out or it pulls the car over, slices our throats, and throws our bodies in the ditch.

The highways are under whiteout conditions. The fools people who chose to live in the hilly north end of the city can't get home because of the ice on the hills and bridge decks.

This is not a time when I would chose to venture out to the mountains. Fortunately, the Marthas and I took care of that a few weeks ago, when one could still hike 6 kms up Johnston Canyon in short sleeves. Even if we did need windbreakers for the gondola ride to the top of Tunnel mountain. 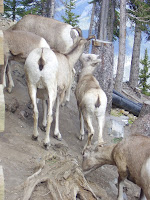 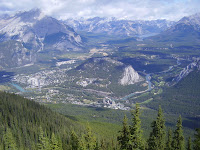 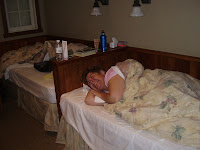 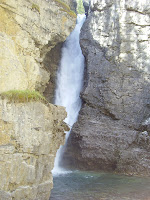 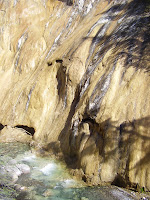 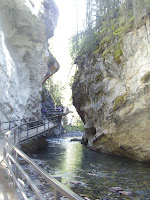 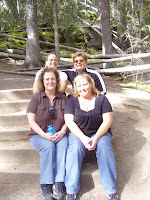 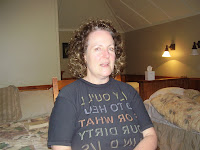 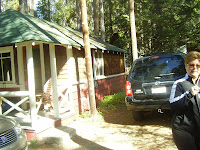 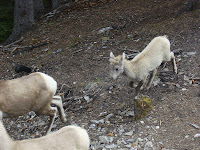 Posted by Barbara Bruederlin at 6:47 pm

Email ThisBlogThis!Share to TwitterShare to FacebookShare to Pinterest
Labels: martha pic spam, marthas do the mountains

Wow, you were seriously in the wilderness.

Can't believe its snowing already though. More reason for you to make frequent Vancouver trips. ;)

Once upon a time, I had occasion to do some October fly fishing in your fine province. We fished the Bow below the city for a day then headed down to the Crowsnest. That's when the snow started. Six or seven inches of it fell. We discovered it was possible to fish in those conditions. As long as we stayed in the river, everything was fine. When we emerged onto snow covered shore though, the snow stuck to our wading boots and we were soon like Yeti, staggering through the bush. We came upon a guy who lived on the river, who said, "Did you see the grizzly that came through here the other day down that trail?" Um, I've been chased off that river by black bears, but I thought the grizzlies stayed higher in the mountains. We didn't see the bear. We did enjoy some very good fishing though. There were little midges coming off the river and the good rainbows were on them and we caught our share. Driving back to Calgary a couple days later was nothing if not an adventure in driving. Your weather doesn't mess around.

We need to meet in the south Pacific somewhere this weekend, Justrun. Screw the turkey! Which is the first time I have EVER said that.

More reason for me to move to Vancouver, Al! It's not like I ski or anything stupid like that.

Our weather is a bully blowhard, Mr Anchovy. Makes the grizzlies look mild. Still, it's a good thing that grizzly did not see you.
The Crowsnest Pass is even more insane though. Once you get into the mountains proper, you never know what to expect.

some days i feel guilty for living here...


but then I quickly overcome

I'm so glad I my pain is not causing you to lose any sleep, Kelly.

Gondolas freak me out a bit, I have to admit. The views are great, for sure, but I've seen way too many creepy movies where the gondola gets stranded mid-ride in a bad storm with a serial killer aboard etc.

Don't think the serial killer aspect did not cross my mind, Wandering Coyote. About the mountains in general, actually, not just the gondola. But you are a mountain girl, you should be used to this!

I know I'm not supposed to feel for those hillbillies, but I madame am a hill loving fool as well.

We got a little brush of snow, but not much.

P.S. It took my six attempts to comment. My lack of Internet has turned me into a Capta hillbilly as well.

Your tenacity is certainly appreciated, JustA. You can't keep a good hillbilly down, evidently.