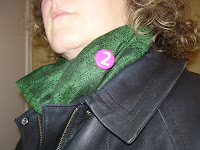 I have become a wearer of scarves.

I am not entirely sure how this happened to me. You remember me, the one who for years first bemoaned the very existence of scarves as entirely unnecessary, then scoffed at them as pretentious? Well lately, about 100 years after the rest of the world has been artfully draping silky or nubbly or diaphanous ribbons around their swan throats, I have been finding myself eyeing up the scarf racks that festoon every store from boutiques (although they would only have two in the store, of course) to drugstores.

I test drove the style first, wearing scarves to a couple of concerts recently. It was a pretty safe thing to do, akin to wearing camouflage, as scarves have been an integral part of the indie kid uniform the world over for the past several years. No one stared, no one whispered behind their hand. 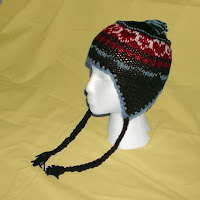 Today I wore a scarf while running errands. With a rock pin nonetheless. I may have created a monster.

Don't be surprised if you see me wearing one of these some day soon.

Posted by Barbara Bruederlin at 2:56 pm

Email ThisBlogThis!Share to TwitterShare to FacebookShare to Pinterest
Labels: 100 years behind the rest of the world, confessions of a fashion victim

You look hawt in that scarf.

Oh, this is weird. I, too, have a somewhat new found scarf addiction. I mean, you cannot argue, they are fabulous!
And I'm liking the hat! (Or is that still a toque?)

I can't do scarves. My neck gets too hot!

You rock that pashmina!

I own far too many, but they work as art more my bedroom walls when I'm not wearing one. :)

Scarves are irresistable. They're my favourite useless item, tho there are times when you need to fill that gap between shirt collar and top button.

It is far far too hot over here to even want to look at scarves, unless you have a deeply ingrained sadomasochistic streak in you. But your piece of green cloth looks fabulous. On you, of course. And only you.

It's beginning to become more and more apparent that we were indeed separated at birth, Justrun.
Rule of thumb, if it's wool, it's a touque.

I own a few (never worn), which hang over doorknobs and bed frames as well, Al. I do love functional art!

I imagine, if arranged carefully, SME, they would hide any missing shirt buttons, saving us all time and the frustration of having to find the sewing kit.

Nobody else in the entire world can wear green, so says the mighty BAP. But this scarf is big enough that it can also be used as a skirt. Folk festival wear!

I'm starting to own too many scarves, but it's cold around here (my excuse for owning too many). At first, I didn't like them with only a shirt but over the last month I've been wearing them more. But I love tuques, it's one of my favourite items in the colder months of the year.

i love the pashmina...!! i have a brown one that rich in the uk found at a pub in germany i think...some posh lady left it behind he sed and he nabbed it 4 me lol

I love touques too, Evelyne, on other people. I just don't have a good hat-wearing head.

Rich is obviously a keeper, Jen. Only a true friend would nab a pashmina for you.

This is precisely what I am going to attempt, Mr Anchovy.

i noticed a plethora of scarves on both male and female types in Paris...

You probably carry your wallet in your back pocket too, don't you, Kelly?

yes I do, isn't that where guys do carry it?

what does that mean?

folding money in front pocket and no change...I hate change in pockets

tell me now what does that mean?

I think I been slammed

A safety tip: do NOT wear a scarf to bed and choke yourself to death.

Not that you would, of course. Very few scarves look good with footie jammies.

Scarves rock, and they come in handy when one reaches a certain age and gets overly occupied with getting chilled!

So where do you carry your change then, Kelly? Presumably not in your man-purse. Or do you?

That's exactly why I am currently on the hunt for a scarf with little duckies on it, Charlie. Winnie the Pooh characters will also suffice.

I've been noticing the same tendency for the old lady chills in myself, Gifted. It's a troubling trend. Not that we are old ladies, but , you know, someday...

i throw it in the compartment in the car or in can at home and when full I roll it up...last time I had over $200!

Wow, looks like the scarf fairy has been working overtime. I put one on the other day as a joke, making fun of pretentious people and then, lo and behold, I've been wearing it all week. Get this: my neck is warmer! And I like it.

I've never been much of a scarfy, but this has a bit to do with my ex-husband, and I won't bore you with the details here. I only turn to the scarf drawer if my limited array of necklaces yields nothing that doesn't look stale.

Every time I wear one, though, I get a compliment.
(shrug)