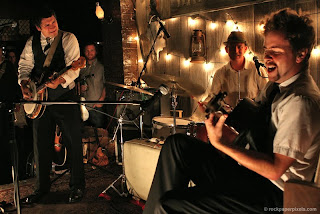 Conventional wisdom suggests that Sunday night might not be the optimal time to hold a barn burner of a concert, but conventional wisdom obviously does not know Elliott Brood. The crowd that packed Dicken's Pub, threatening to seriously strain the integrity of the basement bar's foundations, did not care that they had a work week to start the next morning. Like every Elliott Brood audience I have ever been part of, they knew that the band was going to deliver a high calibre, highly interactive, joyous experience, and if it meant chafed hands and raw throats the next morning, well that's just the price that you pay when you get sucked into the exuberant vortex of this band.
It's been quite the year for Elliott Brood since they last made my head explode. Despite being robbed of the Polaris Prize after being short listed for their excellent album Mountain Meadows, and despite Casey Laforet being clobbered by a collapsed lung (which I asked him about at the merch table last night, he's fine), they maintain such a joyous presence onstage that everybody in the room goes home feeling like they participated in a revival of the spirit, in a celebration of comrades and co-conspirators.

We were thrilled to be able to share the night (and the last free table in the place) with Susan (one half of the cutest BLIP couple in the country). She was such a stalwart soul to brave the ocassional snow and the wind gusts that cut to the bone to head downtown solo on a Sunday night to meet us.
We were congratulating ourselves on our awesome table scoring prowess, right up against the dance floor as it was, but didn't factor into it that said dance floor would soon overflowing with grinning Elliott Brood fans. I felt somewhat badly that Susan (who had never seen Elliott Brood before) was not really able to see the action onstage through the sea of backs, but somehow the magic of the music and the chemistry of the band managed to translate through all that flesh and plaid. The Wall of Plaid, as we lovingly named the four similarly attired fans who parked themselves in a row in front of our table, were entertaining enough all by themselves anyway.
The Wooden Sky opened the evening with a drop-dead gorgeous set of haunting and raw

alt-country songs. Alternating between heart-wrenching ballads that morph into singalongs and gritty roots numbers steeped in experimental sound, they played a set that was at once haunting and racous. It made me very glad that I was being true that evening to my life's motto of always buy the cd.
When Elliott Brood took over, they launched into a hearty melange of songs that were at first heavily geared toward the old favourites, which was great, but I was really glad when the band shifted into selections from the exquisite Mountain Meadows. There's a very good reason that album caused such a buzz in indie music world. In true form, the night was a real conversation between band and audience, with quick-witted quips flying back and forth ("we're going to swear all night!"), with consensus being reached on what frontman Mark Sasso should name his expected baby ("okay, it's agreed - Awesome Sasso will make a great name for a boy or a girl"), and with aluminum baking sheets and wooden spoons being doled to the crowd to encourage audience participation ("sorry, we should have more, but Edmonton cleaned us out!"). Not that we needed much encouraging anyway. You had to look pretty hard to find even one person not clapping and singing lustily along with Write It All Down for You during the encore. Most of the rest of the set too, for that matter.
Even with all the love in that packed and sweaty room and with all the enthusiasm on both sides of the stage, the thing that I found particularly heart-warming and perhaps indicative of just how magnanimous the members of Elliott Brood really are, were the shout-outs to the opening band. Not once, not even half a dozen times, but probably more like seven or eight times, the Wooden Sky were applauded by Elliott Brood, and in turn by us, for their fine performance that night. That's a hell of a decent thing for a Polaris short-listed band to do. It's no small wonder that people had travelled from Lethbridge, Regina, Windsor, and god knows where all else to see them last night in Calgary. They knew they would be warmly and enthusiastically welcomed.
And once again we readily believed every word when Mark, Casey, and Stephen told us that we kicked Edmonton's ass.
Posted by Barbara Bruederlin at 3:56 pm

Wow, another Canadian band I've never heard of! Thanks for the review, Barb!

See, I've heard (or read) you rave over this Elliot Brood for ages now, and I only just bothered Googling them to see (or hear) what they sound like.
I am now officially hooked. I love you. And Canada.


Re: Walls of Plaid. I think there's a new North American law of 2009 that says they must exist at every concert. I have seen one at every show I've been to this year. I always say it's easy to see a fashion trend at concerts, but it's good to know it's not just me.

I think any band that encourages audience participation to that extent deserves the Order of Canada! So 'put yo pans in the air, like you just don't care'. (Man oh man, that must have been so much fun!)

Fantastic, fantastic review Barbara. I could in fact smell the plaid as I read this piece. You captured the atmosphere that is an Elliot Brood show to a tee. This is clearly a band on the way up. And won't it be great when we can say we knew them way back when. We'll be the cool kids then huh?

Wall of Plaid! HA. I think you just inadvertantly named their next album!

I first got into them after hearing "The Bridge" on the late great National Playlist (sigh...). I'd love to see them live.

Great opening acts rule. Sometimes, of course, they rule too much. I once saw Ashley MacIsaac open for The Skydiggers. No one had any energy left over after MacIsaac left the stage.

Barb...I finally posted a couple France pics and of course I washed my hands before and after

You showed up dear. This was a given.

Sean is spot on, Wall of Plaid is a great album title! Not to mention what my wardrobe looks like from afar. ;)

You will hear of them soon, Wandering Coyote, mark my words. Both bands!

It doesn't take long to fall under their spell, does it, BAP. We have got to get working on your honourary citizenship!

Wall of Plaid does seem to be spreading amongst the hipster population, Justrun. This phenomenon appears to be taking over from argyle sweater vests on boys and cowboy boots on girls.

There is nothing quite like the scent of plaid to conjure up a night at the show, Sean.
And I think that Elliott Brood deserves the OofC for all the Canadian Tire money they had to cash in for all those aluminum pans. Singlehandedly keeping our economy afloat. Beat that, Stephen Harper!
Yes, when we are sitting in the old folks home listening to Elliott Brood muzak, we can bore all the nurses with our tales from back in the day.

That is exactly where I first heard them too, Remi. We must have been listening at the same time, which is comforting somehow.
Oh lord, I can just imagine how Ashley MacIsaac could suck all the oxygen out of a room!

Well, as long as you lathered, I shall be right over to take a peek, Kelly.

Aww, thanks for supporting the colours, Doc. Although I really have nothing against Edmonton, but they don't need to know that.

You definitely need to be on the album cover, Al.
Tomorrow! They're at the Biltmore on October 7! Go, go!

I still regret not having seen them when they played Yellowknife in 08. In my defense I didn't have a job at the time.

There is no defence, John. But you have been punished enough already by missing out, so I will let it drop.