you may have my precious bones on my return 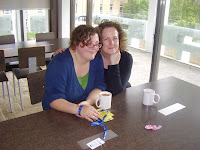 Everything is different.
I was okay when the Offspring formerly known as Resident strongly hinted that it was time for her hovering parents to leave. I was fine riding shotgun on the 12 hour trip back home; the empty back seat did not even loom that large. But oh, walking in the front door, I realised just how utterly my world had been turned upside down. 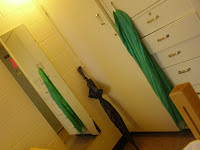 The cat, famous for her silent meows and for her superior attitude toward the (former) Resident Offspring, was shell-shocked, prowling from room to room, calling out for the missing human. But I was tired, and although our technical difficulties with skyping the FRO were disappointing, they were issues I could put off till today. Doing laundry was a mistake, at least stripping the bedding in the former RO's room was. I feel badly for the Spousal Unit. Not only is he also dealing with missing his kid, he now also has to deal with a weepy wife.

I expect that the basement torture chamber will see a good deal of action over the next while, as I plan to log quite a few miles on the elliptical to help ward off those blues. The house is probably going to be cleaner than it has been in years as well. So hey, if you want to visit, feel free to simply drop by. No need to call first. You know I will be overjoyed to see you. I will likely jump on you and smother you with hugs and big noisy cheek kisses. I may very well even invite you to eat off my immaculate kitchen floor. 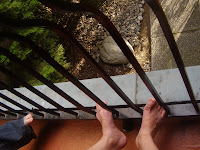 Over the next few days, I'll be reminiscing about some of the adventures we had in both London last weekend and Vancouver this weekend. There were extraordinary blogger meetups that were utterly sublime, there were scandalous tales surfacing at my mother-in-law's funeral, there was a suitcase full of humiliating family photos that came home with us, and there was no shortage in either city of bizarre moments that left me scratching my head.
Stay tuned. The zombie is back with photos and a few lies.
Posted by Barbara Bruederlin at 2:12 pm

I can't imagine how difficult it must be to the former Resident Offspring leave but I'm sure that you're wicked proud of her :) And if I had a car, I'd come down and visit you.

Awww Barb, I really feel for ya, I'm sure it feels weird having the RO away at school. But I know she's going to have a fantastic time in Vancouver and I'm so excited to hear about her experiences!

Let's get together soon, I want to hear all your news and I'll even let you cry on my shoulder if you want! :)

Awww, empty nest. But, as we say in these parts, ya done raised her up right, so she'll be fine. And you probably will too. :)

Also, give me directions and I'll visit!

FRO will make out okay, Barb, and so will you: keeping active is infinitely better than sitting around thinking constantly about her.

As far as eating off your floor, I suspect the cat would get quite pissed if she saw me using her bowl.

Ah, Barb...sending you virtual hugs & good wishes. I can't imagine what this feels like for you & your husband...

When I left home, I got the distinct feeling my parents were relieved...So I am happy for your FRO because she has parents like you!

Virtual hugs from this end as well. =) I'll be leaving home around this time next year as well, and I truly do not want to think about how difficult it's going to be. But I bet you're ridonkulously proud of the FRO, no?
I'll maybe hijack a plane and come visit tomorrow, if I can squeeze in some time. Keep an eye on the news.

I am proud of her, Karen, she is becoming a full-fledged adult (something her mother never quite managed to do). I can't believe we haven't met yet, living relatively close as we do. We must remedy this sometime.

Yes, let's do get together soon, UB. I'm sure we both have loads of tales to share. At this point evenings are being spent skyping the FRO, but we can work something out.

She managed to grow up well despite our fumbling efforts, Justrun.
If you use a GPS to get here, you will likely get the same instructions we did: "turn left in 950 kms".

I've never been particularly good at not being busy anyway, Charlie, and I expect now I will go through a whirling dervish phase for a while.
The cat will certainly give you the hairy eyeball if you used her water dish, so I may have to offer you a glass instead.

It must have been terribly saddening to feel that your parentals were relieved when you left home, Wandering Coyote. It doesn't exactly make one feel like they have a harbour to come home to. And that harbour is so important.

You give good ehugs, John. Real ones too! Thanks.

I will get your bail money ready, BAP!
I'm sure your parentals are already starting to fret about your wellbeing and about missing you. There is no point in leaving these things to the last minute.

I remember the day I moved out, I was somewhat sad but also really happy to start something new. But I never really thought about how it changed at home until my sister asked when I'll go back home. Hope the former Resisdent Offspring is going to enjoy university life!

Big hugs to you!!

At least you can take comfort in the fact that you know she's going to shine at university. She's already made a step in the right direction by getting that giant umbrella. Very smart. :)

She seems to be enjoying it quite well so far, Evelyne, so that goes a long way toward helping me cope with the loneliness.

She has a purse umbrella in addition to the giant one, Al. And you should see her awesome rain boots! She is totally Vancouver.

I've been anticipating this post - sort of living through your experience the similar encounter coming my way when my own two will take flight.

Just the thought of it is crushing - but they are only 13 and 10 so I guess I'm still good.

Still, it's a happy occasion, once you get through the adjusting. And it will bring new opportunities for growth and exploration

The pain, although intense at first, lessens with each new friend that you hear about or each new victory that they share with you, Gifted. I am beginning to think this can be done.