taking a break from opining at the furniture

The Final Fantasy concert is back on. Apparently twas a seasonal flu and strep throat which felled Owen Pallett in Victoria, not H1N1, and the lad is soldiering on. Way to call upon those t-cells, Owen!

I am not yet permitted by my doctor to drive, so I am picking up my date and driving us to the train station instead. I figure I can get that far without killing anyone.

I did take the urban assault vehicle on a practice run yesterday and was a little discombobulated by the extreme 3D-ness that I was experiencing. I kept wanting to reach up and remove the 3D glasses from my face. But once I learned not to flinch and yell whoa! with each passing tree, I was good.

And at the risk of imparting far too much information, you will no doubt be pleased to know that I successfully showered today, without melting my eye or whatever dreadful thing would have occurred had I gotten water into it. Sponge baths grow old very quickly indeed. 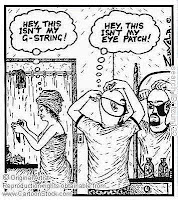 I am still not permitted to wear makeup, though, so shall be mingling with the lovely young concert-goers at my most spectacularly hideous. Dark bruises under the new eyeball and everything. But not bruised enough so that it is immediately evident that I am post-surgical, just enough so that I look like an old hag who doesn't give a shit anymore.

Perhaps I should go in disguise. Any suggestions?
Posted by Barbara Bruederlin at 2:57 pm

How on Earth did you shower without getting water in your eye?! That's it! I knew you were a super hero.

why haven't we seen pictures of the eye post surgery?

I bet you wore goggles in the shower. You did, didn't you?

And Owen is alive! Enjoy the gig. I'll put his albums on a loop while you're at said gig, as per tradition.

Isn't that a great super power to have, Justrun? Infinitely superior to merely flight or sprouting spider webs.

It's not all that dramatic, Kelly, not like your eyeball surgery was. THAT was noteworthy.

No goggles were harmed in the taking of the shower, BAP. But a girl has got to maintain a few secrets.
I was wondering what the looping was that I kept sensing! It was YOU, staying up all night listening to OPalz.

You're hilarious - "an old hag who doesn't give a shit!" Best line ever!

keep the glasses on, and in case of an emergency, use a paper bag with two holes cut out for seeing

The sad part is, it's true, Wandering Coyote! But it'll be our little secret, okay?

And the paper bag will come in handy for any emergency that requires transporting a popped eyeball to emerg, Gifted. Good plan.

Glad to hear you are enjoying a night out and if your eye is as bad as all that at least no one will be willing to mess with you as you already look like you won one fight!

On my blog you asked for another joke, so here you go. I hope you like it as well as the other. Enjoy the show!

The concert was fantastic and amazing! Thank you so much for taking me. Also, it was completely dark in there so if you really DID have any remnants of a black eye(completely untrue) no one would have seen it anyways. Though, it could have given you more street cred with the hipsters. Or trouble with the transit cops.

Yeah you should have seen the other guy, Doc!
Your jokes are getting addictive. Or maybe it's just your accent. Tell us another one!

That was fun last night, Kait. You were an awesome date, too!
Maybe if my black eye had been a little more prominent I would have been brave enough to take on those transit cops and help out that poor harassed kid.

Now you know how I feel when I scare the young uns' at those rock n' roll shows! I just hope you used your piratey look to scare up a seat close to the stage. (Hey one must exploit these as advantages sometimes...)

Owen must be quickly becoming your most frequently seen rock star type... You might want to consider adopting him!

Just tell them, "If you think I look rough, you should see the guy who messed with me."

How often does one get to look dangerous?

Sadly it was rather dark in the church so I wasn't able to flaunt my hideousness to my advantage, Sean. Next time I will bring a flashlight to shine under my chin.
But oh yes, I have seen Owen so many times now that we are likethat!

Not near often enough,Remi. I really must exploit this now before I revert to my god given beauty.

You can now use that line from Valley Girl. When someone asks you if a movie is in 3-D (which, let's face it, probably won't happen), you can say, "No, but your face is."

I'm glad you got to see him in concert. Ours has been cancelled, sadly. :(

I didn't even think of goggles, I was thinking of something much worse. Glad you got it sorted out. :)

I could, Beckeye, and it would come naturally too, as I say that to pretty much anything anyone tells me.

Worse than goggles? I am terrified to ask, Al. So I won't.
(James Blunt masks?)