Montreal might eat its young, but Vancouver will break us down 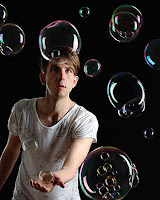 Poor Owen! Not only does he possibly have H1N1, but he misses out on his once in a lifetime (well maybe twice) to play for the dream team audience of Al, Mel, and the Offspring Formerly Known as Resident. I just know his heart is broken.

Get well soon, Owen Pallett. And if you have to cancel Monday's Calgary concert, I totally understand. I'm not supposed to be driving yet anyway. Let's wait till we're both 100%, shall we?

To help with the healing, here's a pic spam from the Great Vancouver Odyssey 2.0. 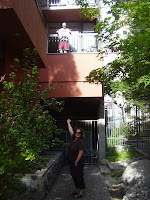 - hotel balconies are about free wifi - 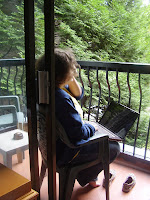 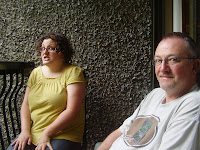 - and sipping a glass or two - 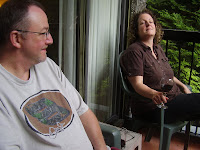 - resident rooms, on the other hand, are for being squashy - 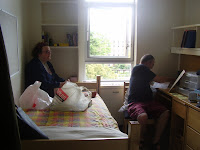 - and for showing off new rain boots - 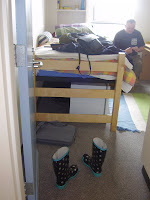 - going in for the smooch on Mel - 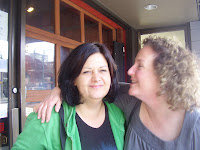 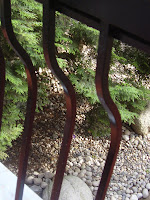 Posted by Barbara Bruederlin at 4:58 pm

Email ThisBlogThis!Share to TwitterShare to FacebookShare to Pinterest
Labels: Final Fantasy, great Vancouver odessey 2.0 pic spam, I tried and tried to keep the crowds away

who's rubber boots and why are they being worn?

Despite not attending the concert, we managed to have a fab evening! Sushi and screamers (slushie and soft ice cream) and some wandering in the west end. :)

Some wrist twirling alongside Owen would have been nice, hopefully the concert will be rescheduled and he gets better!!

If you think a dorm room is squashy now, just wait 3 or 4 months. What starts as a teenage utopia quickly devolves into an adventure in weird science. Just don't look under any of the furniture and possibly stay away from the closets.

They are the OFKAR's (Offspring Formerly Known as Resident's) boots, Kelly. They are being worn because it Vancouver, for pete's sake!

I'm so glad you three managed to get together after all, Al, despite the sorry lack of OPalz assisted wrist twirling opportunities. I hope the poor lad recovers quickly.
Screamers sound more intriguing that they should!
It's a great hotel, we'll have to have a pyjama party there when I come for a visit.

So you are saying that in 3 months, it will look exactly like our house (while the Offspring was still resident), Remi? Hmmmm, I dunno, I give it 6 weeks.

oh sure you may a well put a sign on her head saying..."I'm new here pick on me please"

I suppose she has an umbrella and goretex jacket too?

I'm not a newbie to Van and I have rainboots. Wet feet are no laughing matter!

What do you have against rubber boots, Kelly? I thought you firemen just loved those things.

I know, right, Al? Dry feet are your friends.

Spam pictures are the best: you never know when you're going to catch someone scratching or rooting around in their nose.

my firefighting boots are leather. Much more comfortable


And just never mind about the thing for rubber

I have 2 pairs of rubber boots at home, I only wear them if going out on a boat though, or if I have to trudge through slushy snow with the dog

Owen. Is. Sick?? I am devastated. And it's not like I'm going to see him anytime soon or whatever. But hope he gets well.

And your art shot..'tis awesome.

Alas for the contraction of the swine flu.

And when you are spamming shots of the zombie clan you are pretty much guaranteed to catch someone scratching or picking or otherwise engaged in unsavoury activity, Charlie.

Only worn for going out on the boat and walking the dog, Kelly? What about that other rubber boot activity that we agreed not to ask you about?

We are all burning tiny little violins in effigy for healing wishes to Owen, BAP. I am certain you are doing the same.
The ART shot is now dedicated to OPalz.

We have been alasing and alacing all over the place since we heard, Pilgrimchick. Very glad to have you join us.

You folks had Screamers!!

I feel like a failure for not having hooked up with you guys (yet) - any of you. Just will make it that much sweeter in the end though.

Life has been crazy. You'd think I'd know how to roll with that by now.

Pics are gorgeous...all of you.

Not us, actually, Deb. It was Al, Mel, and the Offspring Formerly Known as Resident. I, sadly, was in Calgary at the time.

But you know what Screamers are! Must be a Vancouver thing, I needed it explained to me.