I won't take her to the movie, I'm worried that the lines become all blurred

Recently the Resident Offspring and I watched two films about quarantined zombies - one Spanish, the other Canadian. Other than that premise, they had far less in common than you would have expected. Add to those, the animated documentary and the mathematical thriller we also viewed and you have yourself a veritable smorgasbord of film.
We like to mix things up and keep them a little spicy here at Casa de la Zombie.

[Rec] is a Spanish film shot from the point of view of a local television film crew who follow a EMS crew to an apartment building to rescue an elderly woman trapped in her suite. When the rescue crew are attacked by the woman, local authorities outside the building inexplicably quarantine the rescuers and the residents inside the building. All hell then proceeds to break loose.
The story itself is not overly groundbreaking, and it does not shy away from cheap thrills and gore to get the point across, but the camera work used is what makes [Rec] noteworthy. It is filmed entirely through the tv station's camera, the point of view that of the camera operator. This becomes particularly effective as the situation begins to deteriorate, and the camera work becomes more unstable, with the microphone failing quite convincingly on occasion. Of course this is a similar technique to that used infamously in the Blair Witch Project, but in [Rec] it is frightening, not annoying. I found myself succumbing to that same sense of dread that used to fill me during particularly intense games of hide and go seek as a kid.

Pontypool, on the other hand, tells us to stop making sense. The latest offering from Canadian film maker Bruce McDonald (Highway 61, Hard Core Logo) is a darkly funny and entirely engaging zombie film.

In the small Ontario town of Pontypool, a former big city talk radio host, demoted to hosting a morning show broadcast from the basement of the town's church, finds his bloated on-air musings and the usual school bus cancellations and traffic reports interrupted by disturbing reports of mob violence throughout the town.

As the radio team barricade themselves against waves of attack, it slowly becomes evident that the zombies are infected by a virus spread through the English language.

Pontypool is a fascinating and entirely unique take on the zombie phenomenon. The exploration of the power of language, the strange speech patterns that afflict the newly infected, the attempts to devolve the strength of a word through repetition, and the radio team's attempts to communicate in Canadian high school French, elevates this film to a new gold standard in the intelligent zombie flick. At last, a literary zombie film! 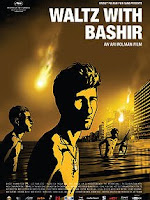 I am still kicking myself for not paying as much attention to Waltz with Bashir as I should have. BLIPping and carrying on email conversations while watching a subtitled film is not the wisest use of multitasking, unless one understands Hebrew, which I don't.

I will rewatch this film properly sometime. Waltz with Bashir is a full-length animated documentary in which director Ari Folman explores his memories of the 1982 Lebanon War. Through interviews with others who shared his involvement in the Israeli Defense Forces during the time of the massacres at the Sabra and Shatila Palestinian refugee camps, he attempts to understand a recuring dream and to reconcile his own actions as an infantry soldier.

This is a grim film, but visually stunning. The animation is simply stellar and the soundtrack very powerful. With the myriad of awards and accolades piled on Waltz with Bashir, I really owe it to myself to give this film my full attention next time.
-----

I had some seriously nasty flashbacks when we first started watching Pi, as it is filmed in the same over-exposed black and white as the most excruciating film of all time, Eraserhead. Fortunately, that's where the similarities ended and I was not forced to gouge my own eyes out with a rusty spoon after all.

In actuality, Pi is a rather mesmerizing film, despite the fact that I didn't really understand what was happening much of the time. In brief, it's about a paranoid mathematician who seeks to find the key to all the patterns in the universe. Ostensibly, he is trying to find a system that will predict the behaviour of the stock market. His investigations arouse the interests of a cabal of Wall Street heavyweights and a secretive society of scholars of Jewish mysticism.

The soundtrack, featuring Autechre, Massive Attack and Aphex Twin, is great. The imagery of fractals and numerals, as well as more disturbing ones involving puslating brains and nose bleeds, is visually very satisfying. See it for the mystique, don't try to fully comprehend it.

I love Bruce Macdonald. He opened the Kingston Film Fest one year with a mocumentary he produced on one of his failed films, it was brilliant, more so was the talk afterward.

You've seen some intriguing films lately...I haven't really. Although I did watch Canadian Bacon for the first time this weekend, and it was enjoyable. :)

Between music groups and now movies, it's like you live in another world instead of a few hundred miles north of me. The only movie that played here was "PI", in one theatre, and I'd heard it was difficult to understand unless you were an extreme geek. Or perhaps high.

So much for living in a huge cowtown without any cows in it. Without you, I'd never know any of this stuff existed.

Hmm, that almost sounds like I'm referring to you as a cow. Perish the thought. I meant that you are my source for information.

I'm not sure if I have ever seen Canadian Bacon myself, Al, is that the John Candy one? Surely a grounds for my deportation, I would think.
But yes, we lucked out on some great viewing recently. Mind you having an RO with impeccable taste in film sure helps.

I think being high would definitely help with understanding Pi, Charlie. Sure wish I had thought of that.
You know, if you hadn't pointed it out, I never would have noticed the possible slagging, but now that you have... I may just have to slyly refer to you as Wiley Coyote or something.

I haven't seen any of these films. I do occasionally drive near Pontypool on the way to my father-in-law's cottage though, and I know to speed up. I'm not about to mess with zombies.

Just don't say anything until you are well past Pontypool, Mr Anchovy! So no singing along with polka tunes!

Interesting - i'm interested to read the Jane Austen Zombie book - it will undoubtedly be a flick.

Must get onto Blip

I have the Jane Austen zombie book, Gifted. And it's next on my reading list.

BLIP is way too much fun, you really should check it out.

I gave Waltz With Bashir my full attention and it tore my heart out, especially the ending. The animation and music was brilliant and seeing the contrast of footage at the end with all that preceded it was quite powerful.