drill holes in themselves and live for their secrets 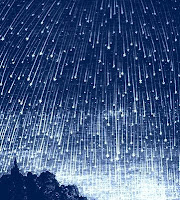 They were startling the first morning.

Initially I thought that the flashes of white were glints from a mirror, but they were too fleeting and too many. As I glanced out the window, I saw the seagulls traversing north to south in small groups across the early morning sky. Although dark clouds still blanketed the earth below in shadow, the birds were high enough in the atmosphere to catch the rays of sun that were breaking through far above the horizon. Their white wings captured the zenith of morning sun, their rhythm refracting the wavelengths, scattering the polarity of light into droplets of oblique brilliance.

I have seen them every morning since, like clockwork, in roughly the same numbers, reminding me to look up from my earth-bound or inwardly-focused gaze periodically.

Last night the meteors passed by, on their annual migration to wherever it is that meteors spend the autumn. Perseids are here we called to each other as we pulled on sweaters and pulled the door shut behind us. Too cool near midnight to lie back on a blanket, with not enough forethought spent to find a sheltered spot not visible to the neighbours and the odd passing car. But standing so that the branches of the mountain ash blocked the glare of the streetlight, we craned our necks to revel in the oddly jerking motion of those shooting stars, tails trailing ostentatiously behind them far longer than decorum dictated. Showoffs, those celestial bodies, second only to that master showman, the solar eclipse, in knowing how to strut their stuff.

How is it that they don't bump into those ones and zeroes which rocket their way through the ether, teleporting the dreams, wishes, and lolcats that race amongst us?

Posted by Barbara Bruederlin at 12:36 pm

Email ThisBlogThis!Share to TwitterShare to FacebookShare to Pinterest
Labels: sky nerd, the sun smells too loud

Amazing what is out there, if we just take the time look and watch. It makes you feel pretty small in the Scheme of Things, doesn't it.

Yet another reason to move to Canada; meteor showers every year? Honestly, were you people that nice in your collective past life or something?

Also I'm probbaly too far away/too late for this, but I'd like a copy of the Calgary mix too, if you're not too busy? A digital one would be just fine too.

Why, thank you, Wandering Coyote!
The title is actually shamelessly stolen from the Radiohead song Subterranean Homesick Alien. Wordsmiths they are.

Yes, I really need to look up from my computer screen periodically, Charlie. It's particularly humbling to consider the vastness of space, which is probably why I don't do so all that often. Nobody needs a humble zombie.

We most certainly were, BAP, a proclivity we carry over to the present incarnation. Can't wait to see what happens in our next collective life.
You are most certainly neither too far away nor too late for the mix, and I will be happy to either mail it (complete with custom-made cd booklet) or send a digital. But email me (bbruederlin at shaw dot ca) your contact info, pretty please!

There is something so rhythmic, almost lyrical in this post my friend. You really captured something special, and captured it well.

I have a lot of wishing to do.

I'd give you some of my spare wishes, Sean, if I had any. But you can have my thanks instead. That's an awfully encouraging thing to say about my little words.
What are the chances that you ended up on some of those home movies that the subterranean homesick aliens were filming while you were busy watching them? You are going to end up on Martian YouTube if you aren't careful.

It reminds me of the time I saw the Northern Lights. One year they just appeared in Kingston, it was amazing, and we too rushed bundled to the street and craned our necks in awe.

Thanks for the memory jog. :)

I love this time of year for that reason

That's a wonderful moment and so beautifully written. Great soundtrack, too. :)

Those Kingston northern lights must have made a wrong turn at Albuquerque or something, Al. I'm sure they were simply trying to get to Winnipeg, where they are used to hanging out all winter. Oddly I don't see them very often here, maybe because I spent more winter nights outdoors in Winnipeg. You would think that would not have been the case, but you know teenagers!

I'm glad we saw them that evening, as we have been socked in with thick cloud since then, Gifted.

Thanks, Katrocket! Radiohead seems to provide the soundtrack to my life quite often, it seems.

Me too, Barbara! I'm a big fan of Radiohead fans.

They get a little fanatical, Katrocket, but I guess that fits the description.