standing in front of the kitchen sink, in bare feet, eating watermelon

That's really what Dominion Day Canada Day is all about, innit? You can keep your grandstand concerts, even if they've got a hot ticket headliner like Kim Mitchell or Glass Tiger. I don't need any red and white balloons, and although I wouldn't turn down a piece of that slab cake with the little Canadian flags on it, I don't really need any of that either.

The cat, in a rare but not unheard of burst of daring, has already been up on the garage roof, ensuring that the marauding hordes are not yet visible coming over the border. It's a party trick she pulls out when she is feeling particularly patriotic.

As my final tally in the Canadian Book Challenge will attest, I am not a particularly well-read Canadian, having only completed five Canadian books this year. But I did get the review for the last one written just under the wire for the deadline, so I am rather patting myself on the back for that final burst of productivity. You can read my review of Jonathan Goldstein's Ladies and Gentlemen: the Bible here.

If you are enjoying a day off today, enjoy it fully. Tomorrow you can always phone in sick, on account of being overly patriotic. If your big national holiday falls this weekend, start practicing up for it now. 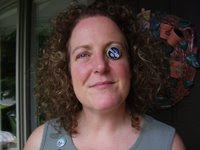 I leave you with the traditional Wilhelm Bruederlin Extra Old Stock salute. He would have turned 87 today. Papa would have gotten such a kick out of the fact that all his kids and all their kids put beer caps in their eyes in his honour every July 1. For him it was the height of humour.
Posted by Barbara Bruederlin at 2:19 pm

Email ThisBlogThis!Share to TwitterShare to FacebookShare to Pinterest
Labels: is my Canadianity showing?, shameless self-promotion

I've been eating lots of it lately. So much so that my boss asked me the other day if I was on an all-watermelon diet. Which has me wondering, is there such a wonderful thing?

Hate watermelon and have no beer caps to stick in my eye but Happy Canada day anyway!

Now that I'm doing this going to work thing I've totally enjoyed having a day off in the middle of the week. Wish it was Friday! Dreading with every ounce of being riding the train all next week. Especially if I have to wear cowboy duds. UGH!

Happy Canada Day, heres a beer cap in your eye!

Yes! I am so glad our patriotic days both include copious amounts of watermelon!

being bombarded my american 4th of july stuff this week, i feel somewhat at home. ;)

Hmmm. Your Canada Day font colour is reminiscent of your Evil Dead the Musical font colour. How very subversive of you...

I have a similar photo, but with a sea urchin on my eye instead of a bottle cap.

Hope you had a great bowl of Frosted Flakes, er, Canada Day.

You oughta be careful about putting bottle caps in your eyes: as my mom used to screech, "What if your face freezes that way?

My husband hates watermelon which is incomprehensible on top of being unpatriotic.

If there isn't (and why wouldn't there be), I think you should invent one, Beckeye. You could sell it to all the celebs and maybe take over BILLY MAYS' spot on tv.

How does a person hate watermelon, Urban Blonde? It's like hating water. And sugar.
But my god, dear, you are going to be thrust directly into the Stampede insanity, aren't you? I will be hiding in my basement. They aren't really going to make you wear cowboy gear, are they? Bastards!

And here's one in yours, JustA! It makes a good international greeting, doesn't it?

Cheers to y'all too, Volly.

It's what makes us such good neighbours, I think, Justrun. Or, in your case, neighbors.

If you squint your eyes just so, those little American flags can pass as little Canadian ones, Al. As long as there is plenty of watermelon.

The font colour wasn't really meant to be a comment on our national colour being reminiscent of dried blood, John, but I will certainly accept any suggestions of subversiveness.
I have a feeling that a sea urchin eye is considerably more disturbing than a beer cap eye. Do you even know where that thing has been?

That's the sad thing, Charlie, your mom was correct. It has frozen that way.

I just don't understand the watermelon-haters either, Leazwell. How is that even possible?

Barb, I love your picture! You look amazing! :)

Now that is a Canada DAy tradition I can get into. It's fun, true and genuine. And funny as hell.entr

It's amazing what a little beer cap will do to enhance once's beauty, Jas. Why more people don't sport these things, I will never know.

And cheap too, Gifted. Which also would have been very important to my dad.