maybe all I need is a shot in the arm 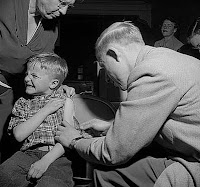 Here's one for the WTF files.

Evidently only about 35% of girls in the Calgary Catholic school system have received vaccinations against the human papilloma virus, which is estimated to cause 70% of cervical cancers. As you are probably aware, the vaccine is being offered to girls in grades 5-9, as protection against the virus which is often spread through sexual contact, and so far about 75% of girls in the public school system have been vaccinated.

For girls outside of this age bracket, parents must pay the +$600.00 cost, so it seems a no-brainer to take the opportunity to have your daughters vaccinated within the school program, right?

However, the Calgary Catholic school board has decided not to allow the vaccination within the schools. Bishop Fred Henry has apparently objected to these vaccinations on a moral ground, saying that they will encourage premarital sex. According to his way of thinking, if girls know they are protected against HPV, they will be more likely to engage in sexually activity.

Also, does anybody have any idea what the hell has happened to MyDataBus? I pay to use the damned site, in order to host my articles and such, and it has disappeared off the face of the internetz. Swallowed up in zeroes and ones.

Can you recommend any other hosting sites?

Posted by Barbara Bruederlin at 10:28 am

Email ThisBlogThis!Share to TwitterShare to FacebookShare to Pinterest
Labels: killing kids with religion, the battle of zeroes and ones

im a non-vax'er and opted out of ours here for Ayla...ida transfered it to u if I could haha

im SUPER suspicious of this vax b/c like HIV, pregnancy and other crotch cooters it is preventable with common sense...its not like it jumps off towels onto ppl and u get it inadvertantly...

thats a pretty steep price though...if someone wants it i dunno why it isnt offered up...esp bc the catholics are being super retards about it....?
youve called the health unit?

i recommend calling your MLA bc that gets shit done around here lickity split....

Add this to the mile-long list of reasons why I'm glad I'm not a Catholic.

Oh wait...most of these reasons are some variation on "Because they're stupid." Maybe I could edit this down a bit.

I am actually not necessarily in favour of the HPV vaccine myself at this point, but not on any moral grounds.

I know of a friend who contracted HPV without being sexually active, so I'm all for this vaccine, just not the price. Hopefully it'll be extended my extended health care soon.

I hope Fileden works for you. :)

*Hopefully it will be offered with extended health care.

"mydatabus" has been down for at least a week and they had the nerve to charge me my monthly charge today.

I'd recommend moving over to "http://onlinestoragesolution.com". I signed up on the weekend for unlimited storage for $15US per year. It's not quite as nice to use as "mydatabus" but far cheaper.

It's another case of Christians fucking things up for everyone else. Holy crap how I hate them.

Bishop Fred doesn't seem too worried about little boys having premarital sex though, does he.

Just another example of the church's gender bias.

I can't agree with you there, Jen, I'm not entirely sure it's preventable with common sense, and even if it were, why take the risk? People aren't always known to use common sense.
Girls in the Catholic school system can still get vaccinated for free, just not at school clinics, they must go elsewhere.

I'm married to a Catholic and he's pretty smart, Beckeye, but of course I know you mean him as an exception.

Although I am obviously in favour of this vaccination and of vaccination in general, Wandering Coyote, what bothers me most about this situation is the moral threat that is being held over these girls' heads.

That must have been quite a blow to your friend, Al. Too bad the vaccine wasn't available earlier.
Our benefits reimburse us for a portion, but I'm happy to pay the full cost if needed. Not everybody can, though.

Hi, Golf in Canada, and welcome! Thanks for the information, and for confirming that it wasn't just me being MyDataBus-blind or something. I'll check out that site, much obliged.
Those bastards at MyDatabus, though, what a lot of nerve!

Now, Dr M, you have been known to fraternize with the clergy on occasion; I read your blog, you know. But they did seem like exceptionally nice clergy.

I think in Sweden, or possibly Norway, the vaccine is offered to boys as well, which only makes sense, Charlie.

I'm all for this vaccine, it is covered under extended health benefits or health spending accounts. I need to get my DD in, she's been walking around with the prescription for it.

And I'm afraid that there may be misnomers floating around about this vaccine, but having seen a Mom of three die from cervical cancer ( at the age of 34) when my DD was in kindergarten makes me thankful this is available.

You'll have to pay doctor's fees to give the series of injections as well, Urban Blonde, which is not covered by extended health, but that's minor.
Glad to hear you are blogging again, coming over to check out the renewed site!

My worry with this vaccine is that it's being hyped as a wonderful cure-all. As far as I can tell, the chances of catching hpv are rare and the chance of it causing cancer even rarer. While I'm all for preventative medicine, I think that a lot of the hype around this drug is being caused by parties that are not exactly impartial - namely, the big drug companies. Once money gets involved, I tend to get skeptical.

They've shaped the argument so that, rather than informing of the actual risks, they take the easy route and try to shame you into it.

Now, as for the Catholic board banning it on moral grounds, I just hope that someday they will find a way to pry their heads out of their, uh, rear ends and wake up to a reality that is as old as humanity - sex will happen. It always does. As such, you can either do the loving thing and prepare and educate your children to be mature about these things or you can bury your head in the sand until you are confronted with more, uh, tangible proof (a la the Palin kid) that abstinence only education is just wishful thinking.

What scares me is not the notion of teaching sex ed, it's the fact that when kids brought up the abstinence only way slip up (and they do slip up), they almost never use contraception.

I think I may have slipped a little off topic. . .

To be honest, I hadn't considered the role of Big Pharma in all this, Remi, so thanks for bringing it up. I know that personally, I would rather err on the side of caution, even it it means lining a few pockets.

You only slipped off topic a fraction to one side, and it's certainly all related. Abstinence only education is irresponsible, and those kids are not prepared for real life.

One of the occasional commenters on GT is a Gyn/Onc who served on the National committee to get that vaccine into circulation. This wall of stupidity and morality righteousness is one he knows well. He has dents in his head from banging his head against that wall

The data bus thing is troubling. Cloud apps are great until the Venture Capitalists decide that the business model isn't working and pull the plug. I wonder if this is what's happening

And for the skeptics, this guy is no drug whore. He knows how the game is played on both sides and has witnessed the moralizers seize the agenda by planting false and incorrect doubts in the media.

That must be extremely frustrating for him, to see this health concern turned into a moral issue, Gifted. How do you fight against narrow mindedness like that?
I'm still not sure what's happened to MyDataBus, but I have given up and am moving elsewhere.

Barb - I agree that the vaccine is important. Did you know the only women that don't get cervical cancer are those who never have had sex? And as you know, I've been there, done that and wouldn't want any other woman on this planet to go through all the chemo/radiation,and side effects. If it prevents one women from cervical cancer, it has done its job and worth every cent. I also agree that it should be covered under government healthcare. The cost of cancer treatments far outweighs the small price (in comparison) of the vaccine.

Yeah, I was certainly thinking of you when the news of the low turnout and the Catholic school board's stance was made public, Kathy.