I underestimated how much I use the microwave. Since it died spectacularly on the weekend, I have had to completely rethink my approach to cooking. Did you know you can cook things in the oven as well?

It might be something as simple as a fuse, but we can't even remove it to find out, as we can't figure out how to get it down from the range hood in which it is embedded, without ripping the whole damn thing apart. This is why these odd job companies are flourishing, on the incompetence of people like us. You would never know that we once renovated an entire house, ripping it right down to the bricks and adding a second story.

I fear that the microwave's demise is just another acceleration of the impending death of all the appliances in our house. You already know about the planned washer replacement in the bathroom sink, which escalated into a brand new designer sink. 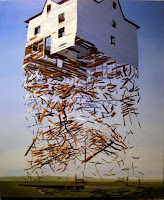 Then there was the slightly more serious issue of the pilot assembly for the furnace. The cat is taking credit for saving our house from blowing up, as the only reason we knew there was a problem was because I smelled gas one morning when I went down to clean the litter box. Not cat poo gas either.

The harsh winter blew the seal on the kitchen windows so that they are now filled with condensation, and those were our only good windows. I don't even want to think about what lies behind the wall around the tub. The one that leaked.

What amazes me is that the ancient dishwasher, the appliance which we were certain would be the next to die on account of the chunks that keep falling off it, just keeps chugging along, doing a lousy job of cleaning the dishes.

I'm going to stop now or you are never going to put an offer on our house, if we ever put it on the market, are you?

Posted by Barbara Bruederlin at 11:48 am

Email ThisBlogThis!Share to TwitterShare to FacebookShare to Pinterest
Labels: home repair for the homelessly inept

I've never been fully able to trust the microwave as a cooking apparatus. I made a really bad fish sandwich in one once as a kid and now, over two decades later, I don't use mine for much more than a rare frozen dinner, popcorn or pogos. I keep leftovers based on how well they will taste cold.

When my dishwasher breaks down, I try therapy and then I'm all better again. Well, not really, but the truth is far more boring.

Its funny how some appliances last and others fail. My parents had a microwave in their house for 25 years before it hit the bricks. They replaced it, and the new one has died numerous times since, much like how you're describing, its been a pain to fix. They're all about the toaster oven now. :)

Here's hoping yours is easily fixable and that there's a sale on windows soon!

What's an oven?? Frankly, it sounds made up.

There is a lot to be said for renting!

My dad doesn't have a microwave and he says he'll never get one. It drives me up the wall when I go over there, though!

We don't have a microwave and never have. I heard they make pretty decent popcorn though.

Barb,
Don't worry be happy! You can all move into your beautiful cabin no house at Tokaryk Lake, where the rainbow and brown trout are putting on a fantastic aerial show for fly fishermen. Fly persons would be more politically correct but that does not sound RIGHT.
All those appliances have their shelf life and it appears to be getting shorter all the time. We have had so many microwaves I can't remember what number we a on!
Hey when I retire in 1 year, 7 months, 20 days, 1 hour 8 minutes and 28 seconds, I will give you guys a hand bring your home back into shape.
Take care
Bruno

having installed my own over the range microwave hood combo...i could help you...if I was there...but look in the cupboard above for a couple supporting screws and then maybe just pull it off the supporting arms?

Oh and it was a bitch to install...tore the wall out in closet behind to route duct work through ceiling and attic to outside

A bad fish sandwich 20 years ago, Remi? I am impressed, you really know how to hold a grudge, my man. Remind me to stay on your good(ish) side.
I essentially have to wash my dishes before they go into my crappy dishwasher. Sometimes I wonder why I bother.

I'm still hoping it will turn out to be a fuse so that I can microwave something nice for supper tomorrow after the service guy gets here, Al.
On the windows, I have lived for 11 years with a bedroom window that doesn't close, so they are way down on the list.

A woman after my own heart, Beckeye!

Your dad must not eat as many leftovers as I do, Wandering Coyote. He's just lucky you visit anyway, frankly.

Bruno, I have taken a note of the time, your retirement time frame, and your rash promises, and I am going to be expecting a visit from a handyman with nothing but time on his hands and a hankering to work.
The Spousal Unit is all excited about coming out to see you and the flying pickerel next week. I'm making him a road trip cd, that is my contribution to this trip.

See, that second paragraph just stopped me from going to look for those supporting screws, Kelly. Besides the service dude is coming tomorrow, I'll let him rip stuff out.

I like to transform leftovers by reheating them in the oven, or even better, in a fry pan.

That is without a doubt the first instance of a cat, and by extension- of a litter box saving a life. I can not believe the CBC has not come a knockin' for you to recount that cat tale!

Sorry to hear your appliances are giving up the ghost. As a homeowner I can definitely attest to the phenomenon whereas everything seems to fail at once. Somewhat akin to when lightbulbs all seem to go at the same time y'know? Why is that anyway?

But I digress... At least now you are approaching barbecue weather. (If the damn snow ever melts.) Heck, throw some charcoal in the malfunctioning microwave and grill something indoors!

The funny thing is a new microwave would probably cost the same as a new fuse.

I say put it up on concrete blocks in the driveway and spend your free time drinking pabst,wearing overalls, and tinkering.

It's not all bad, Jen. I'm relearning what a frying pan is. That's important, right?

My frying pan is getting more of a workout now too, Mr Anchovy. Which of course dirties more dishes, oh it's just spiralling out of control.

Sean, I am just grateful that our cat's name is not Oscar. Combined with the gas leak, that might very well have ensured that you would have been hearing about me on the CBC.
The lightbulb phenomenon I think you can attribute to a conspiracy by the College of Physicians and Surgeons of Canada to drum up some additional sprain and fracture business. They are in cohoots with the carbon monoxide sensor industry, who are thrilled to hear your indoor grilling suggestions.

That's not a bad idea, JustA. I already do that with the old bbq, so this will just make things even more homey in the driveway.

hmmm, do I hear rumblings of the early nester zombie?

How well I remember when our kitchen was torn up and the only cooking appliances were the microwave and the grill. I didn't even have a sink - that was the worst.

Perhaps you are, Gifted. When the only child leaves, there will be a huge gap in this house, and it may be time to make some changes.

Oh yes, I had forgotten about being sinkless, Leazwell! When we were renovating our old house, I recall washing the dishes in the bathtub. I have no idea how I managed to repress that memory.