and the flying nuns signify ...? 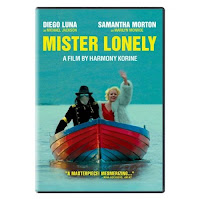 Has anybody seen the film, Mister Lonely?

Could you explain it to me, please? I still have no idea what the extended side story of nuns jumping out of planes had to do with anything.

I expected something rather more quirky and light from Mister Lonely. This story of a Michael Jackson impersonator who meets a Marilyn Monroe impersonator and is persuaded to join a commune for celebrity impersonators certainly had its quirkiness and moments of humour, but much darkness and tragedy as well.

I'd be curious to know if anybody has seen this. And if you have figured out the nun side story, please enlighten me.
~*~
In shameless self-promotion mode, I would like to direct you to a review of a book which is considerably more straight forward, that I have posted over at the Bookworm Collective. It's a great summer read, for those of you who actually get summer.

I'd be curious to know if this book actually captures the male zeitgeist, as it is said to do. Gentlemen?

Posted by Barbara Bruederlin at 8:43 am

Email ThisBlogThis!Share to TwitterShare to FacebookShare to Pinterest
Labels: Bookworm Collective, films that I didn't quite understand, shameless self-promotion

Can't say I've ever even heard of this...

It's one of those one-copy wonders at the video store, which are often my favourites, Wandering Coyote. It wasn't quite what I expected, but still worth seeing.

That film sounds right up my weird alley.

keep away from my psyche dammit!

oh yes...you want a film to talk about....rent "teeth" Its about a girl with teeth....down there

Dr M, I think I actually saw the film take the turnoff to Dr Monkey Von Monkerstein Way, which we all know leads to Dr MVM Alley.

Do you not want your psyche probed, Kelly?
Oh yes, I've heard of that movie. Talk about your male psyche! If that one doesn't address fears of emasculation, I don't know what does.

Thnx for the warning

I would suggest that the nuns were jumping out of planes because they were late either for church or for chow.

As far as your review, there isn't enough info for capturing the male zeitgeist—bildungsroman, after all, is a complex subject.

hmmm...sounds intriguing. if i ever stumble across it i will be sure to report back with details. :)

It's actually a good film, Gifted, just had me perplexed is all. Which isn't really all that hard to do.

You should direct films, Charlie, or at the very least be a critic. You do after all know all these fancy words.

A nice 2000 word critical review would be greatly appreciated, Al.

maybe the nuns/airplane thing is about Flying Nun (aka Sally Field) wannabees?

That was the first thing that crossed my mind too, Kelly.

I don't know if it captures a zeitgeist or not, but I liked it a lot.

As for the film, I'm always leery of stuff the Harmony Korine does. While Kids was an interesting experiment, so much of his stuff is just so bleak and pretentious.

That said, I do like the premise of this one and I live next door to exactly the sort of video store that would have Korine's entire oeuvre so I may have to go rent it.

I just might have to join your book club, I am hurting in the reads dept.

Kids was not exactly a feel-good movie, either, Remi. But I think you may enjoy this one. Especially since you evidently live next door to the best video store in the country, lucky duck.

Lots of good suggestions on that site, JustA. Check em out, stay a while.