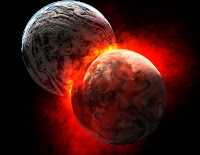 The (not so little anymore) blogger card is moving on.

Congrats to Nicktionary for his winning pitch, not only identifying the post's title, now she's a little boy in Spain, as being shamelessly stolen from the lyrics for the Neutral Milk Hotel song Holland, 1945, but for making that great leap over from BLIP.FM. It's always great to have acquaintances in multiple places.

Well played, Nick! Shortly a suitable memento of the true north strong and free will be winging its way over the big puddle to you.

~*~
In other news, Teddy is interested in starting a mix cd exchange circle and it looking for some music aficionados, keen for some musical discoveries, to join up . Check out the details here.

~*~
The Resident Offspring is dragging me to see Watchmen tonight. I understand it's close to three hours long. That blue penis better be worth it.

Posted by Barbara Bruederlin at 3:51 pm

Email ThisBlogThis!Share to TwitterShare to FacebookShare to Pinterest
Labels: blog friends across the universe

I was kind of disappointed with the Watchmen. Jackie Earle Haley was the best part. I'd still really like to read the novel though.

I am quite looking forward to seeing Star Trek. :) Enjoy the cinema!

The RO liked the novel a lot, Al, but I'm not expecting too much from the film. But everybody loves the Star Trek prequel apparently.

I would love to join a cd circle but I'm afraid I'd bore everyone to tears with screeching guitars, screaming vocalists, and monotonous techno beats. :D Besides - I royally SUCK at mailing shit off, hahah.

A blue penis? whatchoosay? Isn't there a pill for that?

Hope the movie is awesome! The mixed CD thing sounds like a good idea. I'm not very up on music though, I have no idea what is current and cool. I am a classic rock gal for the most part.

Still great idea though, hope its successful for him!

Believe me, the time flies while you're watching Watchmen. I loved it.

I enjoyed both the novel and the movie.

And I saw Star Trek today, it was awesome!

That whole mailing off business is pretty daunting, agreed, Michelle. I tend to think that I am done putting together my masterpiece, only to realize that an entire day of finding mailing material awaits. Teleportation, there's the key.

The movie was quite entertaining, actually Rachael, although there was a considerable number of unintentional lols.
I am very surprised to hear you say you don't know anything about music, seeing as you are a musician and all.

I was pleasantly surprised, Dr M, but I think I should really read the book, as they sort of rushed over the Minutemen parts.

I have been hearing nothing but good about Star Trek, Stephanie. Well, except from the Star Trek purists who are SCANDALIZED by the whole business.

Must get self on this Blip FM

You must, Gifted. There's loads and loads of music and fun there. Sometimes I must impose restrictions on myself.

The guy at my local video store is from the scandalized side of the star trek debate. Me, I just can't see how they're going to justify giving a starship to a bunch of kids who wouldn't look out of place as extras on Ferris Bueller's Day Off.

I think I'm going to wait and rent Watchmen.

Everybody looks like a kid to me these days, Remi. It was inevitable that the enterprise crew should be next.