when I was cruel 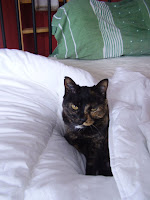 My two greatest accomplishments this weekend were:
(1) finding a new way to torture my cat
(2) watching The Fall.

It wasn't exactly water-boarding, but my latest Gitmo technique was even more satisfying than the previous gold standard yogurt container method.

It started when I was rummaging through the cupboard and made the thrilling discovery of one of those little Cheezies mini-packs, evidently left over from Hallowe'en or some road trip. The cat has been highly aggressive about anything remotely resembling food lately, and I guess Cheezies sort of fall into that category. Since she wasn't satisfied with the morsels of bright orange compressed cheese-like matter that I fed her, I gave her the empty bag when I was done.

I have no idea how she managed to fit her snout into the 28 gram bag, but once she did, it was wedged right onto to her face. Let me tell you, cats get really pissed off when you start screaming with laughter as they back their way across the room, trying to shake a Cheezies bag off their face. Especially when you stop rolling around on the chesterfield in order to rescue them, and then they DO IT AGAIN. Don't ever let anyone tell you that cats are a quick study.

After I got over my initial disappointment that The Fall was not, after all, an expose into the misadventures of Mark E Smith, I enjoyed it far far more than I expected to.

You must see this film.

For starters, it has some of the most stunningly gorgeous and imaginative cinematography I have ever seen. I was gobsmacked to discover that no CGI was used, because the fantasy scenes are absolutely surreal. The Fall was filmed in 26 locations throughout 18 countries over a period of 4 years.

The film is set in a hospital outside of LA in the 1920's. Roy is a movie stuntman, paralysed during filming, who befriends Alexandria, a curious little Romanian girl, who has been hospitalised with a badly broken arm. To pass the time (and in exchange for the morphine which he convinces her to steal for him), Roy entertains Alexandria with a series of fantastical tales of heroes and bandits.

It's during these action tales that the cinematography is at its most stunning. Every detail is impeccably and vibrantly wrought. Even the headgear worn is fierce as hell.

But eclipsing even the action and the colours and the fierce beauty is the character of Alexandria. She is utterly charming and one of the most mesmerizing personalities I have ever seen depicted in film. Played flawlessly and completely naturally by the Catinca Untaru, Alexandria is so freaking adorable with her broken English and mannerisms that are completely in character with that of a six year old child.

Do you know how some little kids always have to be touching you when they are listening to you, running their fingers along your arm or about your face? That's what Alexandria does. Do you know how some kids never walk anywhere, they always go at a full run? Again, that's Alexandria. I couldn't get enough of her.

Please rent this film, or at the very least watch this trailer. Just don't make me come over there and stick an empty Cheezies bag on your face.

Posted by Barbara Bruederlin at 8:08 pm

why have i never heard of that film?

And Charles Darwin's monkey too, Stephanie! Name of Wallace.

I'm happy to pass along my ill-gotten knowledge to you, Kelly.
I had never heard of The Fall either, but fortunately the Resident Offspring had. Naturally.

I am SO going to watch this film, thanks Barb! Laughing my ass off at Sputty and the Cheezie Bag Ha ha ha! :O)

Just for that random-as-heck inclusion of Charles Darwin, I am so going to see this movie! Also because the guy from Pushing Daisies is in it, and the little girl is disgustingly adorable, and yes, the cinematography is gorgeous (no CGI!).Thanks for the heads up!

Barb, you can cheezie-board me anytime. I shall never give up my secrets. HOLY CRAP! What an amazing looking film. I have to echo Kelly's statement "WHY HAVE I NEVER HEARD OF THAT FILM?" I'm making it a high priority!

Aren't our kitties great? Mine thought fit to drop off a dead mouse outside of my office yesterday. She's always thinking of me... And now bringing me wee snacks to sustain me. Of course she may be thanking me for my method of torture. "The little piece of tape on the top of the head trick" Great, great fun... (evil grin) So when do we open Gitmeow?

Oh and thanks so much for putting the Fall back on my radar. I had completely forgotten about that. Not now though... It's at the top of my must see list now. THANK YOU!

do you not subscribe to the traditional methods of stern words and water pistols!?

Do watch it, Mel! It really is quite magical.
I really wish I had the camera ready for the Cheezies bag incident. Sputty could have been a StuffOnMyCat.com star.

Each of those is an excellent reason to see this film, BAP. And there's some great lore as well. Apparently the entire Romanian cast, through some mis-translations, thought that Lee Pace actually was paraplegic.

I'm not sure why this film slipped through the cracks, Karen. Were it not for the intrepid film student in the house, I would have made my Mark E Smith joke and kept walking.

"Gitmeow"! Oh Sean, you tapped deeply into the pun reserves for that one. Just for that, and for the simple yet exquisite tape to the top of the head method, you get to be Chief of Torture at the new facility.
Your cat obviously loves you more than mine does me. Mine eats every morsel of her kills, leaves none for me, the greedy wench.
You've HEARD of The Fall? You and the RO are the only two people who have, evidently. It must be a big brain thing.

Oh yes, I subscribe to those methods as well, Nick, but those are for discipline. Cheezies bags and yogurt containers are purely for pleasure.

No CGI? Sign me up! I shall have to look out for this, sounds really intriguing. There is a pretty good indie video store here, surprisingly, so I will watch for it.

Now I'm hungry for some cheezies!

"It started when I was rummaging through the cupboard and made the thrilling discovery of one of those little Cheezies mini-packs, evidently left over from Hallowe'en or some road trip."

The real torture to your poor cat is those Cheezies might be nine years old. Crunch, not.

I like movies without CGI: it means the actors have to know how to act. Incredible photography, even on the itty-bitty-shitty screen.

See? That's why I could never join Netflix, Beckeye. I would drive myself nuts (not that I am implying anything here) trying to watch all those movies.

Aren't you lucky, Al, having a decent video store? I have to go all the way into Mission to find something other than Blockbuster.
I'm pretty sure you would appreciate The Fall if only for the aesthetics.

I'm not so worried about the cat eating 9 year old Cheezies, Charlie, as I'm the one who ate the vast majority of them. But I think those things could withstand a nuclear war.
Isn't the photography incredible?

hahahaha. Cats!
I will see this flick. Need something like this now. Where would we be without the brilliant recommendations of you R - soon to be non-RO.

And now I realize why I thought of you right away when I first read Sean's Gitmeow comment, Gifted. It's that punning reputation which proceeds you everywhere.

I guess your cat tormenting tactics aren't any worse than Richard yelling "cracker!" so that the rabbit will come out of hiding places. And he used to do the tape thing to our hamsters, who walk backwards when you do that. ;D

I really enjoyed the visuals in The Cell even though it was a creepy/stupid movie, so The Fall would definitely be worth a try. Thanks! I'm willing to brave AntiChrist just because von Trier hasn't disappointed me yet (well, somewhat with The Idiots), so I think I can handle it.

P.S. What's with Smith and the squirrels?! Did they insult his mother or something?

I think #1 makes any weekend a good weekend, though my cat would disagree.

I also thought The Fall would be about The Fall and the Mark Smith article was so wrong I found it hilarious.

I never even considered tormenting rabbits and hamster, SME! I have evidently been missing out on the finer things in life.
I think Mark E Smith hates pretty much everything after a while. So his turning his wrath on squirrels isn't too surprising.

I don't mind squirrels, but any article that mentions the adventures of Mark E Smith is bound to be hilarious, JustA. I'll bet your cat could take him though.

Barb, I just watched The Fall and was mesmerized from the opening sequence on with the train. What an absolutely beautiful movie. I'm definately buying this one. And who is this Lee Pace? Where has he been hiding? Holy smokes! He had me in tears when he was finishing off the story at her bedside. The exchanges between his character and Alexandria were fantastic, so realistic. If you didn't know better you'd think you were eavesdropping on their conversation. Fantastic recommendation Barb. Simply amazing. And thank the Resident Offspring for me. I'm glad she suggested you watch it and then shared it with the rest of us.