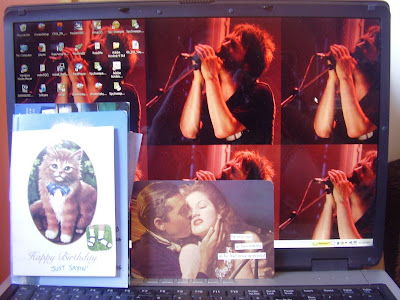 It's been all over the USA and to Australia, and even to Toronto. And now the (not so little anymore) blogger card has come to my hood via that hotbed of cool kids and hot fashion, Akron OH. Many props to Flannery and Doc, who went above and beyond - indulging Dale's little hissy fit or however he pulled it off - and sending the card to me despite there being far more worthy recipients from which they could choose.

Oh the drama, you should have been there.

But you are here now, and you can see how lovely the front page of the card is. Although the cover has nothing, let me tell you, on the amazing contents. It's a veritable tour of the lives of the people who have touched this card. There are photos and postcards and drawings. There are stickers and postage stamps, Schrute bucks and Canadian Tire money. And although the additional card which Flannery and Doc included states "he was not as fascinating as he had once appeared", to me the fascination remains. You will notice that even Thom appears to like it, and that's saying a mouthful.

So here's the deal, friendo. If you would like me to send this card to you next, for you to peruse and admire and add your own little touch to it, just leave me a comment telling me why you deserve it over those other cretins. No bribery is needed, nor will one eliminate you from my wise considerations.

Here are the officious rules to show you that there is nothing tricky nor sketchy about this endeavour. Just good clean fun:

Official rules & regulations:
• When You Get "The Card"post a photograph/scan of it's arrival & contents
AND post these official rules available here
• Ask readers to leave a comment if they want the card next
• Pick the blogger who is worthy
• THEN add your name / url plus a
nice message or creative addition to the card
• Include a copy of the official rules with the card
• Send it on it's way to the next worthy recipient
• Send it out fast..
- no putting it on the mantle an admiring it for 3 weeks...
• Can a blogger who has already received the card - be sent the card again? - Yes!
• What if there is no room left on the card? -
ADD A NEW PAGE - IT'S NOT ROCKET SCIENCE!
*
Who would like this awesome card from Awesometown?
Posted by Barbara Bruederlin at 12:32 pm

Email ThisBlogThis!Share to TwitterShare to FacebookShare to Pinterest
Labels: blog friends across the universe, you know you want it

I'm horribly tardy with mail, so I should probably not attempt to compete for worthiness.

What a grand idea though. Great little snapshot of the blogsphere in tangible form! Oh my! :)

And you have the fullest plate I have seen in a long time, Al, so tis wise of you to decline. It is a very cool card, though.

i think I'm worthy enough becuase I know which song the title is from: Holland, 1945 by Neutral Milk Hotel, and the chances of finda another person who likes NMH on the blogosphere is pretty rare. And I can play it on guitar, and I blog loyallay at nicktionary.wordpress.com, possibly one of the youngest people in the history of the blogosphere to properly blog. Possibly. Anyway, I'd love to have left my mark on something as pretigious and cool. Seriously, what A Brilliant Idea.

Why it's nicktionary from BLIP.FM! Glad to see you making the crossover and thanks for visiting. You are, of course, dead right, about the NMH reference and if you hang out in this little corner of the blogosphere at all, I think you will be pleased to find that there are several Neutral Milk Hotel aficionados in the area.
Yours will be a tough pitch to beat.

Yay! I'm glad it made it to you safely!

I signedup for one of those but with my canada post worker, it will probably never arrive

It did, Flannery, and we are looking after it, daily baths and not too much sugar.

Or it will be delivered to some derelict house somewhere, Gifted.

I'm glad you got to behold the card and the power it holds Barbara and are passing it on! Most excellent.