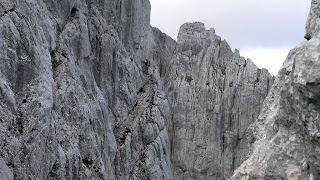 I never thought I would say this, but I am beginning to understand what my mother-in-law was talking about.

The hour long drive had been quite foggy, and it wasn't until we were right in the mountains proper that the fog lifted and suddenly all the rocky peaks were towering over us and all around us. My mother-in-law gasped, ripped open her purse in a fit of panic, and declared, "I need a Tylenol!"

Naturally we have been laughing at her about this ever since.

But on Sunday, we drove out to the country, to the Longview area, to visit friends. Longview is in the foothills, and it's really pretty country, those gently rolling hills from which you can see for miles and miles. But what started out as a low skyline of snow-covered Rockies in the distance, grew relentlessly larger as we kept moving westward. And while I admit that I have never liked the mountains, always felt slightly trapped when I was in them, they have never before bothered me from a distance. I just viewed them as wallpaper on the windshield.

On Sunday, though, that mountain ridge felt absolutely ominous. It was like that South Park episode about the murderous goldfish, where Stanley was trying to get to sleep, freaked out by the creepy goldfish that his great aunt Flo had given him, and every time he opened his eyes, the fish was closer to his bed. The drive toward the mountains was just like that, except nobody actually died.

Those mountains encroaching on my sight-line like a cold-eyed army of automatons, silently moving ever closer, growing ever larger until they threatened to smother me in their deadly grasp were malevolent, I swear to you. I can't imagine why people are so keen to vacation in them all the time. Personally, I can't think of a more inhospitable terrain.

Is there any geography that freaks you out? Or am I the only one who's being weird around here?

Posted by Barbara Bruederlin at 10:57 am

Email ThisBlogThis!Share to TwitterShare to FacebookShare to Pinterest
Labels: mountains are about murdering you in a lake, the Let's Share Neuroses party game

Wow. You are true prairie girl. I grew up in the mountains and find the prairies so flat, boring, and uninteresting. I'm not freaked out by them; they just make me want to nap. I've never been freaked out by any terrain that I can remember.

Never come to visit me here. ;) I'm looking out the window now, and can just see the side of the mountain, no sky.

I'm with you though, the mountains, although lovely, make me feel trapped. I had pretty violent nightmares for the first month living here, my psyche getting used to the enclosure.

I need water to make me feel at home. However, cliffs near water, freak me out. Although I don't thin that's too uncommon.

Regardless of my love of all things nature (really, I do love it all) I have developed a lot of involuntary fears as I've gotten older. I hate it, but wanting to avoid panic attacks, there are just some things I don't do anymore. Heights are one of them, and being under water for extended periods of time (yes, with breathing apparatus and all) is a close second.

The prairies really are flat, boring and uninteresting, Wandering Coyote, but there is a wide spectrum of geography between the vastness of the prairies and the claustrophobia of the mountains. Trees and water, that's where my heart is.

See, I don't even see the loveliness of the mountains, Al. To me they look cold and brutal.
That must have been so hard that first month, getting used to being hemmed in like that. But water, I am so with you on that front.

It's the wisdom that comes with age, Justrun. With me it's ice; I went from someone who used to skate for hours a day, to someone who's afraid of icy sidewalks.

The first time I saw the mountains, I was slightly intimidated by them, I admit. Still beautiful though. Like a giant, beautiful, murderer.

I like the mountain west landscape in general, and certain parts of it in particular. I love driving through Ten-sleep in Wyoming. I love the Crowsnest (the pass and the river, even if I was chased off the river by a bear). I love the drive into Idaho from Jackson, the green hills are amazing.

I'm thinking you're the only one being weird

oops was that out loud?.....damn it Kelly

Wow, I see mountains and I see majesty, escape, top of the world stuff...interesting.

I agree with Kelly...you're just odd. ;) Geography has never freaked me out but rather I often find it awe-inspiring and breathtaking. Not quite the same thing.

Uuuuummmmmm...no. I'm thinking and thinking but no, there is no geography terrible enough to freak me out. I'm not overly keen on being too far from the sea, but I couldn't claim it as a fear. But then I've never been to such mountains as you describe, although I did read a lot of Point Horror books set near mountains as a teenager!

John Mutford, Cliff Climbing Boy would make an incredible young reader series, John. I'd read those to my grandkids.

Can I put you down as in favour of mountains, then, Mr Anchovy?

Come on, Kelly, just tell us what you really think.

Wow, that's sort of the exact opposite of what I see, Leazwell. It is fascinating how the same view can mean such different things to different people.

Okay, so that's two votes for me just being a freak, Karen. I do believe that your feeling of breathlessness is quite different from my feeling of foreboding, yes.

You are simply too well-adjusted, Kees, despite your sketchy reading choices as a teenager.

I just viewed them as wallpaper on the windshield.Very nice, very poetic (as opposed to your haiku).

When I lived in Colorado (we had the Rockies there too), there were several mountain passes that scared the hell out of me: one lane in each direction, no guard rails and, worst of all, tourists from Iowa in their Queen Mary-size motor homes.

Nowadays, I prefer the geography inside the house.

Nice to know I'm not the only person living here who "hates" the mountains. Yes I can admire their beauty....FROM AFAR but I absolutely feel claustrophobic when I'm in them. I have never understood why people head out to them every weekend.

However, I love large bodies of water. I grew up living on Lake Ontario, lived by the Pacific Ocean for 8 years and of course have lived in our lovely "lake" community for the past 14 years. HA!

BTW your Haiku the other day was hilarious!

I love that moment when you aren't sure whether you are thrilled or scared sh$tless.

I am cringing at the image of those Queen Mary-sized motorhomes, Charlie. I've been on a few of those trunk roads where you look way way down and realize those specs are trees, just as you come around the corner and there is a huge truck coming at you.
I'm going to go quiver in a corner now. But don't worry, I won't write anymore haikus.

I don't even bother putting quotation marks around my dislike for the mountains, Urban Blonde. Still not sure why I live here anyway, as I am sure you are not either.

Like whitewater rafting, Gifted? Or in my case, maybe taking really fast elevator.

I hate to be so clinical, but... is there any chance of a disconnect between the eye and the brain for you? Like, for me there is... I love the mountains, simply adore them. But when I'm hiking, especially on narrow trails, I'll physically freeze - my brain seemingly halts - and I can't move upwards anymore after a certain altitude... it's like a vertigo sensation, but I don't actually get dizzy. So I become the buzzkill of the family & make everyone descend & attempt to brainwash them into believing that yes, they TOO, were pansy-asses like me. Maybe even more so. :D

hmm, places that creep me out in nature... Caves. Anything subterranean. No thanks.

Mountains in the part of Malaysia I live are pretty tame, really. Practically non-existent, considering I live in like, a Valley. And I don't know why they call it The Valley because it isn't really one. We're practically tipping over the coast. Almost.
But caves, caves scare me. Even the ones I see in pictures.

Ah, no see, I don't get anything as dramatic or as physiological as that, Michelle. With me it's just a vague feeling of unease and a desire not to be there.
Yours is much more dramatic though, and I am sure you manage to fool the family into thinking that descending was their idea the whole time.
Yeah, caves can be pretty iffy too.

Even the caves with bats in them, BAP? Because bats are so cool. We used to have one living in our patio umbrella. We named him Dewey.

I agree Barb, although they look so beautiful, if you can't see the open sky, they can make you feel claustrophobic.

My fear...staying underwater for extended periods (I am a beginner swimmer, I don't go in without my nose clip, if I don't have it I start to hyperventilate and I don't think that is a very good thing to do when under the surface of H2O).

haha I'm no expert, but it strikes me that hyperventilating under water is not the recommended course, Jas.