another Canadian band you should know - Tin Star Orphans 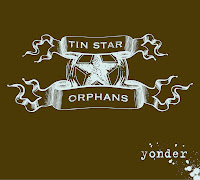 I'm not sure what I was expecting to hear when I first dropped yonder by Tin Star Orphans into the cd player and pressed play. But it certainly wasn't this.

The first track, Juvenile Haul, begins with an intriguing, but not quite identifiable, found sound, merges into some light strumming which starts to build, then kicks in with some authoritative drums, and just as you think you have it figured out, in come the sweetest sounding strings. The song builds and recedes in waves, with each instrument alternately clamouring for dominance and then shying away from confrontation. This instrumental piece is a dance of lovers/fighters circling each other gingerly and sounding so fine together.

Oh, but then, frontman Zachary Bennett's iconic voice rips into the next track Slack-Jaw, and suddenly we are blown into cow-punk territory with a slightly crazed preacher-man leading us by the shirt collar, telling us to listen up. And with another 13 tracks to go after that, you know you are in for a hell of a ride.

This is an album that does not take itself too seriously. In amongst the shit-kicking singalongs fueled by rootsy insanity, there are love songs made bittersweet by Bennett's heart-wrenching voice, a later breezy instrumental piece, and odd little fillers featuring a selection of Plastic Jesus covers. 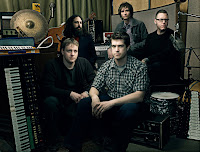 yonder is an incredible album which takes its name from the band's previous incarnation, and it features a rock solid pedigree of talent, including Dean Marino (whose EX~PO album, Central Meaner Street I reviewed last year) on lead guitar.

yonder will be released nation-wide on Tuesday, and you should definitely pick it up. In the meanwhile, Tin Star Orphans is offering up their single, Let You Down, to whet your appetite. And if you like what you hear, I urge you to check out the rest of the album on Tin Star Orphans' myspace.

You can thank me later.

Posted by Barbara Bruederlin at 10:00 am

You're welcome, Kelly; they have a great sound, don't they?
Definitely not Radiohead, but coming from you, I'm not sure if that's a compliment or a complaint.

Dude has the most unusual voice I've heard in a long time... and omg there's serious twang in there! :D

Do you really sit down & listen to a new album in its entirety or do you FF through a fair amount? 'cuz ya know, I don't think I have the attention span for that, I'm a fits & starts kind of gal. :(

kelly has been exposed enough

His voice certainly does get your attention, doesn't it, Michelle? That's one of the reasons that I was so intrigued that they started out with an instrumental and still managed to hook me.
haha I actually listened many times all the way through, mind you while doing five other things at the same time.

Oh Kelly, what're we going to do with you?

Would listen my my audio function's gone pants again. Your words make it sound interesting.

I think we're almost going to have to declare a moratorium on new bands and music, if only for a few months. I need time to catch up.

Of course, I'm never going to catch up when I spend an entire evening listening to the Staple Singers rather than something new. I can't help it though. They're just so good.

Geeezzz not another new band?? ;)

I will listen only because you posted. Feeling a bit overwhelmed with new music lately.

Oi, no audio, Gifted? That would be a deal breaker for me! I start to have panic attacks when the audio part of my laptop has issues.
It IS an interesting cd and band, though. You can trust me on that.

Mavis Staples will be at the Calgary Folk Fest this year, Remi, and she is definitely one of my highlights.
But dude, you have to listen to these guys just once. I KNOW that they would appeal to you. Not that they sound like NQ Arbuckle, but they could be cousins, and I believe you were quite taken with them.

There is a pile of new music floating around lately, Al, I will give you that. I'm not entirely sure this would be your taste, but I think they are awesome.

Hmmm...I like the music and lyrics but his voice doesn't do it for me. I will listen again.

I can't download it for some retarded reason, but I shall go hunting for them now.

That's fair, Al. I'm the same way with Spencer Krug's voice. Can't handle too much of it, although I know you like it.
It's all good.

I'm not sure what the issue with the downloading is, BAP, it works fine from here. Do take a listen on their website though. It'll be your homework for your minor in Canadian studies. I believe Icelandic studies is your major, right?

I really like this band, and I think Bennett's voice is great—it's what sets them apart from about 10,000 or so other bands. Plus, I'm a closet shit-kicker.

OFF TOPIC (KINDA): Speaking of shit-kicking, I've read just 18 pages of Tar Sands and its blown me away. If I didn't know it was true I would consider it bad sci-fi written by a dopehead: "Cheney/Haliburton Meet the La Brea Tar Pits." It's enough to make Stephen King hurl whatever he hurls. So sad, BB, and I'd be boiling all of my water.

Yay! I think Zachary Bennett's voice is great too, Charlie. It definitely cannot be filed under standard indie voice.

I was going to say that I'm glad you are enjoying Tar Sands, but quickly realised that "enjoying" would be the completely wrong word. It's scary as shit. But I do thank you for reading it and for spreading the word.

This looks (and sounds) very promising Barb. Thank you so much for the tip.

It is so refreshing to have such a plethora of great bands upon us these days. And yes, it is a chore to stay on top of it all, the rewards are far greater.

I'll certain be on the lookout in the new release bin tomorrow. Tin Star Orphans should know that you are responsible for one CD sale at the very least! Mine.

P.S. Hope they show up on BLIP.FM

I think this is a must-have cd, Sean, and I have a feeling you'll be giving it a lot of play. I know I have been.

I hope they show up on BLIP as well. I'll be blipping them. (Do you hear me, blip-gremlins?)