I haz a bucket!

Calgary is finally getting curbside recycling.

In fact we got our massive blue buckets this week and pick up will start in about a month, presumably to give people time to figure out what recycling is. Okay, I am being unfairly cynical, there are always loads of people at the recycling depot whenever I am there.

I don't mind taking my recyclables to the depot, although I suspect that it is more fuel efficient to have one truck picking up everybody's recyclables rather than having everybody take their individual cars to the depot and then STILL need to have a truck come and pick it all up.

But what always grinds my gears is that up till now, we have 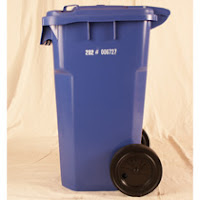 never been able to recycle plastics, with the exception of milk jugs. We've been in Calgary for 11 years now. That's 11 years worth of plastic that I have been needlessly throwing in the landfill; even though I try to buy as little as possible, it still mounts up. Multiply that by a population of 1 million plus, and that's a pretty big stupid number, if you ask me. So I have been saving up all our plastic for the past few months with which to christen our fancy new bucket.

Even though the idiots at city hall voted down curbside composting because it would cost a couple of extra bucks a year, I still luv mah new bucket! 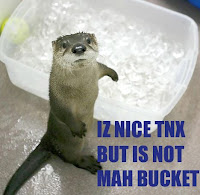 It started snowing here about seven hours ago, pretty hard at times, and still hasn't really stopped. I was driving through white-out conditions when I went to pick the Resident Offspring up after school.

I blame all the neighbours who mowed their lawns yesterday. Never trust spring in Alberta. Mother Nature gonna pop an apple in yo ass, yeah.

Posted by Barbara Bruederlin at 7:12 pm

Email ThisBlogThis!Share to TwitterShare to FacebookShare to Pinterest
Labels: earth day while we still have one, haz bucket will recycle

I was all happy for the recycling (yay!) and then you said snow (boo!) and I had to pretend I didn't read any of it. I think I'd lose my mind if I saw more snow this spring.

Jesus, even we have curb side recycling here!

In Ottawa, we had great curb side recycling, until shortly before I moved. City hall voted to cancel plastic recycling for containers that didn't have necks. So, shampoo bottles were OK, but not margarine containers or other similar stuff. Ridiculous! Just to save everyone a few bucks a year.

The kicker was there was this place down the highway that depended on the Ottawa plastic recycling - can't remember what they did - but they were in big trouble when the new rules came in.

Good for you for finally getting curbside recycling. Way to finally join the rest of the civilized world.

I would just like to take this moment to welcome Calgary into the 1990's.

Actually, I can't say anything. I know of at least one small municipality in Ontario that accepts recycling but then tosses it with the rest of the trash because it is too hard to find a place that will even accept recyclables.

They have recycling depots here. I was gobsmacked to find out curbside didn't exist. My roomie has a pretty good set up, four huge rubbermaids and then takes it in about once a month.

Where I was living in Newcastle, recycling did not exist at all, and it was painstaking to have to throw out plastic.

I still don't get milk jugs out West. You just can't reuse them like the bags. Sigh.

Snowed here this morning too. Gone now though. Hope yours lets up!

I'm with WC...you JUST got curbside recycling? You mean Edmonton has been far ahead of you for years???? Impossible!

Even my apartment building has a giant recycle bin in the basement where we can throw all our recyclables (no sorting required) and the city picks it up just like the garbage. Now, most buildings don't but I think all of the houses in the city get curbside pickup.

We also have a number of mini depots where people in apartments can take their recycling.

We have big green recycling bags for tree cuttings and other garden waste, little brown bins for food waste that can be composted and larger green bins for other recyclable things. But we STILL can't recycle plastic! It drives me MAD! Ok fine, so it's expensive to recycle plastic...so stop making all the packaging out of plastic! I won't mind, honest I won't. I hate the bloody stuff unless it's been made into a nice fancy cocktail ring or something.

Kudos to you for having PURPLE bins! Snazzy.

Good for you! I love our big blue recycling bin. Er, bucket.

I think that's exactly what has now happened to me, Justrun. Where is my mind, anyway?

Only plastic containers with necks could then be recycled, Wandering Coyote? That is so incredibly random that it's made my head spin. What could possibly be the rationale behind that, one wonders?

Yup, the cowboys around here don't like change, Dr M. Unless it means an increase in their bank accounts.

Thank you, Remi! Around here we are partying like it's 1989.
Wow, that makes it so much worse, especially if people believed that their recycling was actually being recycled. I mean, if you know it's not, then you can be a little more vigilant to use less in the first place.

Your roommate's system sounds pretty good, Al; I've been going to the depot about twice a month and it's been working well. Except for the plastics issue, of course.
I can't believe there was no recycling at all in Newcastle! That is barbaric! And yeah, milk jugs are weird, but they're fun to stomp on.
We have tonnes of snow now! And it's icy, cold, and windy to boot! Boo!

I freely admit it, Karen, Edmonton is light years ahead of Calgary in many ways.
It's great that your building has a system as well, aparments around here will not be getting any curbside recycling. And I believe they are getting rid of some depots, so that will make it even harder for apartment and condo dwellers to recycle. Dumb.

You have kitchen and yard waste recycling, but not plastics, Kees? Wow, that's all over the board isn't it? And yes, it is really hard sometimes to not buy plastics. There should be giant tanks of shampoo and stuff where you can go and refill your existing bottles, imo.
I guess in that pic, the bucket does look purplish, but it's actually blue. Shame.

Does yours have wheels on it, too, Bubs? I've never had one with wheels before.

If everyone was made to wear gloves, this could work for condiment refill as well. ;)

I would dearly love to see a big tank of ketchup, Al. Imagine the horror movies you could film on site!

Barb did you know that they spent over half a million dollars on the recycling commerical they have been showing on TV these days!!!

I am glad that there is some sort of recycling happening...I was mighty shocked on the absence of curbside recycling (and no snow-cleaning of the inner streets) when I first moved here!

Half a million? I hate that commercial, Jas. It does not make me want to recycle more.

What is with Calgary? Even Neeps has had blue boxes and recycling for years now! And a place to take your composting, if you can't do your own.
Congrats, I guess.
Berni

You have a composting depot in Neepawa, Berni? That's it, Calgary officially sucks!

We don't have the curbside recycling but we do have spots all throughout town to dump the recyclables- and they accept pretty much everything (except stryofoam trays and packaging, which I wish they'd add). Plus, when you figure that they only allow two bags of garbage per household pickup per week (for free- you could pay extra), you really wouldn't have a choice but to recycle. They've just started charging for plastic grocery bags at the store, too, which is a greta idea- it ceratinly encourages people to carry their own.

I wish they would start limiting bags of garbage around here, John, maybe it would make people think a bit before they throw shit out.