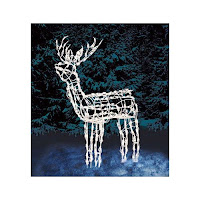 The cat just came in from snoozing outside the back door and she smells like sunshine. I think we may yet get spring and with Easter coming up this weekend, the weather shift could not come at a better time.

But Easter, that's where I am running into a problem.

We still have piles of snow in our yard, especially in the north-facing front yard. And Norman still has his little metal feet firmly frozen into the ground. In fact, three of them are encased in snow and ice. So it appears that we are going to have a wire reindeer gracing our yard for Easter this year. How is zombie Jesus going to know where to leave the chocolate eggs?

I think that I am going to have to give Norman a make-over to make him more Easterly. I'm considering bunny ears.

Any suggestions?
Posted by Barbara Bruederlin at 12:35 pm

perhaps you will have chocolate reindeer eggs left instead

That's such a zombie name for a wire reindeer.

add a pair of rabbit ears to the reindeer and you're set.

Come on, spring! Seriously, whatever it takes.

We has blooming hyacinths in the strip of garden right next to the house. You can't see them from the street due to the snowbank, but they are there!

We have a few jackrabbits that live around here, so we always have lots of chocolate bunny eggs in the yard, Gifted. I shudder to think of the size of the eggs that Norman (which is a perfectly fine name for a wire reindeer, thank you very much) would lay.

I'm considering that, Mr Anchovy, maybe with a yellow bow around his neck too.

This is the winter that will not let go, Justrun! Enough already.

Good thing hyacinth are tough, Wandering Coyote, but they must be confused all to hell.
I've been shovelling our snowbanks for the last few days, spreading the snow around the trees, doing the melt dance.

Oh yes, go with the tie. Bow tie would be uber cool, too.

Anytime I look at one of those reindeers I think of my college next door neighbours who had a pair of them in a compromising position on their roof, year round. Ah, those were the days. ;)

Personally I think Norman would look great stuffed with easter grass. I'm thinking he would like pink or purple.

I'm not too familiar with Easter decorations and stuff (we don't get chocolate eggs either. Or bunnies. Meh) so I really wouldn't know. The bow tie sounds great though! And say hello to Norman from me. He seems like quite an awesome little deer.

The ears have it, a few well placed strips of cloth and you'll get the biggest zombie eggs ever! Happy Hunting!

A spotted bow tie would be splendid, I think, Al. And I'll have to see if I can find Norman a little friend to help him reenact your university neighbour's scene. Because that deserves a reenactment, I think.

With my luck, the woodpeckers would make a nest in the Easter grass and I would have another 27 little bastards eating my house, Urban Blonde.

He is a good deer, BAP, He lost about a third of his lights this year, and one of his legs is rather wobbly, but he's got personality.

Maybe I can attach a fluffy little tale as well, Dale. Pink, naturally.

I'm certainly old enough to remember them, Kelly, but I didn't actually own a tv until those things were long gone. Can I borrow yours?

Give Norman a kiss for me.

Perhaps Norman is making a statement, frozen by his rage and by his desire not to participate in a social order that refuses to validate the beauty inherent to a wirey metalic undead seasonal reindeer.

He is reminscent of David Lynch's "The Angriest Dog in the World";

"The dog who is so angry he cannot move. He cannot eat. He cannot sleep. He can just barely growl. Bound so tightly with tension and anger, he approaches the state of rigor mortis."

Perhaps Norman is where he needs to be....

Why bother taking it down at all. If people ask, just say you're leaving it out as a sign of solidarity for local reindeer. Then beat a hasty exit before anyone brings up the fact that there might not be that many local reindeer.

Norman.
I'm still not over that.
I must now go and settle my vapours.

Do add a bunny as well as some pink flamingoes, a scarecrow, some red hearts and a cupid, and also some tombstones and Halloween decorations to your yard, then tell people you support all holidays all year round with a springtime holiday festival.

Or you could just go with the yellow tie. Either way will work nicely, just don't eat the jackrabbit 'eggs'

Dynamite, yeah, and next year Norman can be one of Santa's amputee reindeer. That's why they pay you the big bucks, JustA.

We actually had the windows open today, Leazwell! It's that weird time of year where the ground is still covered in snow, but the air is warm.

That is pretty profound, Westcoast. My mind is kinda blown by your speculations right now, but if I look at life as a David Lynch film, I can see the rightness of Norman the summer reindeer.

Knowing when to beat the hasty retreat is the key, I think, Remi. Another possibility would be to claim I thought it was a mule deer.

Perhaps a little lie-down and a nice glass of wine for you, Gifted?

I wasn't supposed to eat the jackrabbit eggs, Rachael? Man, I sure wish you had said something earlier!
Just to let you know, the wooden bunny statue is now out on the front porch, keeping Norman company.

I'm thinking if you put the zombie Jesus and the wooden bunny on Norman's back, it'll all make Easter sense.

I wish I had thought of that before I managed to wrestle Norman's little feet out of the permafrost, D. But now with the Christmas decorations removed, our house looks a trifle less white-trashy.