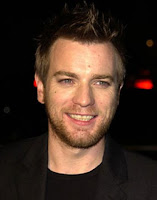 Okay, is it just me or are Joshua Jackson and Ewan McGregor looking practically IDENTICAL these days? Seriously, you put them both in a paper bag, shake it up and draw one out and I'll bet you couldn't tell me which one it was. 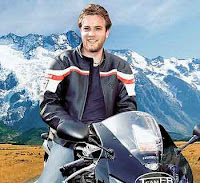 Maybe it's the motorcycle thing.


Speaking of which, I find myself really wanting to see One Week, the movie in which Joshua Jackson (not Ewan McGregor) rides a vintage motorcycle across Canada. The trailer strikes me as being so quintessentially Canadian; I mean he rolls up the rim, fer Christ's sake! I have never seen that captured in film before, yet every Canadian ever born knows exactly what you mean when you say that.

And don't we all stop to get our picture taken beside the giant Moose at Moose Jaw, the giant nickel at Sudbury, the giant goose at Wawa, Husky the giant muskie at Kenora, the giant Ukrainian easter egg at Vegreville, or the giant perogy with the fork in it at Glendon? Of course we do. And yet we hardly ever see these icons depicted in film either. (Although humourist WIll Ferguson has done a credible job of cataloguing these marvels)

Besides, Gord Downie of the Tragically Hip (talk about your quintessential Canadian), Joel Plaskett (the nicest guy in rock), and Emm Gryner all make appearances in the film.

I wonder, though, if this sort of film only appeals to the hosers among us or if One Week is the sort of film that my non-Canadian friends would be keen to watch as well?

I also wonder how many giant highway statues you have seen on your travels?

Posted by Barbara Bruederlin at 2:10 pm

Email ThisBlogThis!Share to TwitterShare to FacebookShare to Pinterest
Labels: giant highway statues, is my Canadianity showing?, separated at birth

Indeed, they do look strikingly similar.

I find myself wanting to see One Week as well, after watching an interview with Joshua Jackson talking about the making of.

However, can we really say its cross country when he starts in Toronto and ends in Tofino? Yes, its a lot of the country but not all. This is just a pet peeve I have with the phrase.

Having just driven through most of Canada this film appeals to me, and I'm also intrigued to see the various highway statues missed upon the way. I'm still sad I missed the Big Nickel. That state of Wisconsin had quite a few huge statues of wildlife...but not one of cheese. Somewhat disappointing. ;)

i hope it plays here...but only having 4 movie screens, ( one theatre burned down and one was torn down for another store) its not likely.

I owned 2 vintage british motorcycle sin my younger days, I didn't travel across the country on them but I did do a few poker runs in Saksatchewan.

I heard about this movie on The Hour - at least, I think it was The Hour. Looks like it might be good, actually.

Well you darn well better see it because y'all sure are talking about it a lot.
And then you can tell me what you think and I can add it to Netflix! :)

I see a bit of Ryan Seacrest in there, too, but down here, it's hard to go anywhere without seeing that particular face...

I've been seeing previews and interviews about this movie for the past couple of weeks and I'm very excited to see it. Plus I think it won an award at both the Calgary and Edmonton film festivals (I may be mistaken). Who hasn't wanted to just get up and drive cross country?

I've done pretty much all the Ontario ones, especially the Northern Ontario ones, including Hornepayne's 3 bears (trust me, it's not worth the trip and I'm from there).

As for the audience, it'll likely be a hoserfest. That's fine, though, because there are far too few hoserfests out there.

I really want to see One Week, looks like an interesting albeit tried premise. Emm Gryner actually has a minor role in it. Could be promising...

BONUS POINTS - Will "rim rolling" become as Cana-ubiquitous as maple syrup and beavers on the world's stage? Compare, contrast and discuss.

Gosh. They DO look alike, don't they? I must say I do prefer Ewan. It's the Scottishness, dude. I'm sorry!
And hey, I wouldn't be totally against watching that film. I do have a thing for Canada, as you know. Not as much as I do for Iceland, but it's there.

Ooh I wonder if it'll be released over here. The quarter of me that's 100% Canadian would approve.

I'm drinking from a 'roll up the rim' right now and got a text message last night from a friend who's in Big Nickel town for a couple of days. I think this means I should go buy a bike and head out on the highway.

The town I'm from put up a big silver salmon fountain shortly after I left, some sort of celebration for me finally leaving I guess.

Good point, Al, he does indeed only travel halfway across the country. It's a big land mass.
Why would Wisconsin not have even one cheese monument, one wonders? We have never shied away from commemorating food in massive road side attractions.

What's a poker run, Kelly? Where you called to Saskatchewan for an emergency poker game, that necessitated you hoping on the fastest motorcycle you could find?

It looks like it is full of Canadian icons, Wandering Coyote.

You know that your culture is still largely ignored when you have to discuss a film that shows your country as your country, Justrun. Gasp! I will see it and give a full report.

Really, Volly? I guess I don't really know what he looks like, not being an AI watcher.

And Ewan's not even all that young, Gifted, I think he just has some kind of pact with the devil.

Or if you are like me, you regularly drive cross country because you have to, Karen. And it sure makes me appreciate the giant statues on the highway, especially while driving through Saskatchewan.

The next big hoserfest that I am eagerly awaiting is the Hard Core Logo sequel, Remi. Still can't quite figure out how they are going to pull that off.
I have never seen the Hornepayne 3 bears, to my great chagrin, but I have had my picture snapped in front of White River's Winnie the Pooh.

Rim-rolling as Canadian identity, it certainly holds true right now, Sean, but I see it fading as disposable cups become outlawed, something that I am certainly pushing for. I am sure they can develop a more environmentally friendly version of rim rolling.

I would also like to see an Icelandic film about a motorcycle trek, BAP. I only recall one Icelandic film, Jar City and was mesmerized by the landscape.

I did not know you were 1/4 Canadian, Kees. Why, we are practically related!

You need to save up to buy the VW van for our road trip to Coachella, Dale, so no blowing money on motorcycles.
You must be very proud to have made such a stellar contribution to the culture of your hometown, even if only by getting the hell out of there.

a poker run is fun. You travel to 5 different towns (usually the bar in that town) and get a playing card at each one. At the last stop the person with the best poker hand wins the money. At the last stop there is usually a BBQ and beer flowing. And of course you always stop for a beer when you pick up your card. Sound slike it could be a drunk fest but the ride between towns usually fixes that.

That sounds like a pile o' fun, Kelly. If you held one in the city, you could take public transit and have two beers at each stop.

beth said...
This comment has been removed by the author.
1:44 pm

Huh, i never would've put Joshua Jackson and Ewan Mcgregor in the 'separated at birth' category, but now that you mention it they do look alike. Unfortunately, I have a hard time watching anything featuring Joshua Jackson without having flashbacks of Pacey and Dawson's Creek (NOT a big fan.....).

One movie that has piqued my interest though is Pontypool.....WOW......I heard an interview with Bruce McDonald on 'Go' the other day and it made me think of you. Take from that what you will.......but I like to think of it as a compliment :)

Of course, it's a compliment, Beth! It's zombies! And Bruce MacDonald! I really want to see Pontypool as well. It looks right up my alley.
I should be okay with One Week as I have actually never watched Dawson's Creek. The closest I have come was the South Park episode about the trapper keeper.

I saw it last Friday and it was really good... I think non-Canadians would enjoy it as well as Canadian folk

Gord Downie & Emm Gryner have nice little cameos in it as well.

:D For sure. My gran was from Toronto, grew up in Detroit, moved to Dorset (where the pirates come from) as a teenager. Craziest accent EVER. Rest of her fam still in Toronto. So yeah, I reckon we got some DNA in common.

Do they actually have speaking roles, Stephanie? What about everybody's bff, Joel Plaskett?
Glad to hear the film lives up!

That's sort of the opposite of how migration generally works, Kees. Did your gran eventually become a pirate?
My family actually all came directly from Germany, so we don't have very much DNA floating around Canada. Yet.

Ha! No but she did get real fat and fly about the place on a moped. Just as terrifying as a pirate really.

They both have speaking roles

A moped! She must have been fierce as hell, Kees!

That is so cool, Stephanie!

Thanks for the eye candy!!!